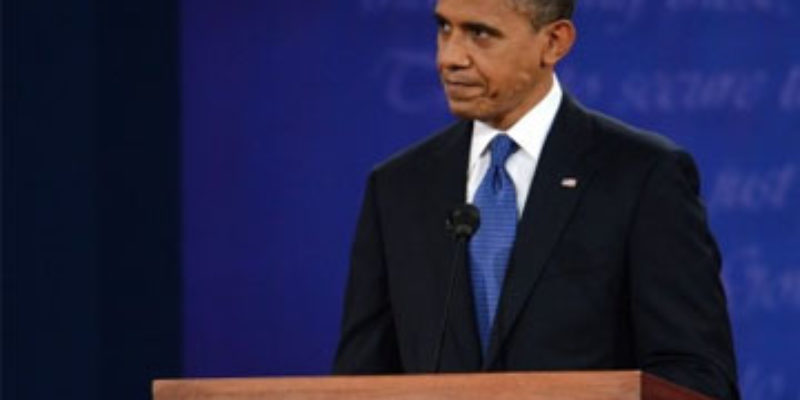 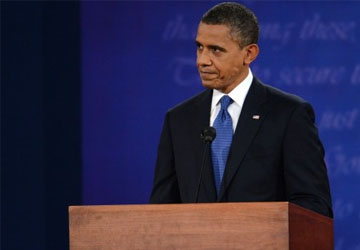 …that it exposed the absolute deficiencies of Barack Obama in a very fundamental way.

This, of course, is ridiculous. It’s true only in the sense that there was no one moment; there were too many to single out.

When Romney told Obama “you don’t just pick winners and losers, you pick losers” when ripping Obama for his Solyndras and Fiskers, that was every bit as damaging as any debate line in a generation. Ditto when he channeled Joe Biden’s “middle class has been buried” gaffe, or when he referenced his five sons and hearing repetitious lies disguised as true statements. Or when he suggested Obama get a new accountant. Or when he said “I’ve been in business 25 years and I don’t know what you’re talking about.”

The line of the night, though, was something a bit more innocuous. It was when moderator Jim Lehrer (more about him in a second) attempted to shift the debate to a different issue from the economy after the candidates had run a bit long, and Romney slipped in a quick “This is fun.”

That was the line of the night because it exemplified that Romney owned that stage. And one reason why the pundits couldn’t identify a killer line from Romney amid so many good options was that Romney’s victory came mostly not from substance (though he won on substance) or on style (though he won there as well) but on presence.

Obama was none of the above. Obama looked down with a beaten expression on his face.

It got so bad for the President at one point where he begged Lehrer to change the subject of the debate. Nobody has ever thrown in the towel like that before.

Lehrer took the cue from Obama and proceeded to “lead the witness” the rest of the way; he allowed Obama to speak for nearly five minutes more than Romney did, and on multiple occasions the host not only provided Obama with direction for his answers but also cut Romney off when he was engaged in particularly violent, if polite, skewerings of Obama’s policies.

And while Romney was scolding and lecturing Obama like a Mormon elder to a parishioner’s misbehaving child, Obama was desperately attempting to push a line of attack based on a provable fraud – that Romney’s tax plan involves a $5 trillion tax cut on the wealthy which would force increases on the middle class. This came from a bogus study performed by the leftist Tax Policy Center – a joint project from the leftist Brookings Institution and the leftist Urban Institute – which has been debunked for some time. But not only was Obama wrong on the facts, he looked like a clown in pushing that line. Because he was no longer on the stump in front of union workers, college kids and Obamaphone users, where he’s free to spout whatever inanities and mendacious tripe soothes his soul, there was a living, breathing opponent standing next to him and looking at him – and responding. Romney repeatedly explained that the “$5 trillion tax cut” was simply not true, and that was a problem for Obama. Because Romney’s statement was very clear, Obama’s was complicated and worse, his delivery was halting – like he wasn’t really sure what the hell he was talking about.

Alpha Males command the subjects of which they speak. Beta males – losers – do not.

But Obama-as-beta-male is hardly the narrative the public expects in October 2012. Last night’s events were quite a jarring experience for many, including the cheerleading squad at MSNBC who melted down in grand style once it was over.

Why the surprise? It looked like even Obama was surprised.

There’s a reason for this, and we have a theory to explain it.

This was a jarring wake-up call for Obama that he has managed to avoid his entire life. Obama has touted a narrative throughout his career that he came from nothing, that he’s a great American success story and that he’s risen through merit. But that narrative is a lie – and finally, at long last, it’s being exposed.

Obama didn’t come from nothing. Obama’s grandparents were middle class, if not upper middle class. His grandmother was a bank vice president and his grandfather was at least a semi-successful salesman in the furniture business. Obama’s mother managed to hook up with an Indonesian oil executive and he lived in a posh neighborhood in Djakarta as a young child. Obama then attended the best private school in Honolulu, before moving on to three prestigious universities – first Occidental, then Columbia, then Harvard Law. And by his own admission his study habits were not the best at least in high school and as an undergrad. We don’t know what his grades were, but we do know he was the president of the Harvard Law Review and never actually published anything.

And in every political race in which Obama was a candidate, save one, he had the way paved for him. The Chicago machine had his opponent’s ballot petition thrown out when he first ran for the Illinois state senate, and when he ran for the U.S. Senate in 2004 the machine managed to unseal not one but two of his opponents’ divorce records so as to expose personal dirt on those candidates. Obama coasted over a Democrat primary opponent who would have otherwise beaten him, and then he managed to get Republican Jack Ryan, regarded as a shoo-in for victory, to drop out in the general election so that he’d have a cupcake race against gadfly conservative Alan Keyes – who didn’t even live in Illinois. And John McCain’s 2008 campaign was the worst the party had sent up since Alf Landon in 1936.

He’d never been in a legitimate competition on a level playing field in his life – except for his ill-fated 2000 congressional race against Bobby Rush, which had been a personal disaster for him – before Romney tore him to shreds last night.

And this man is the president of the United States. Which is a frightening thing to consider.

The good news is that, even though Obama spent today on the stump pitching personal attacks against Romney – it takes a big man to trash the guy who whipped you when that guy isn’t around – and his surrogates are spinning the debate as truth-vs-lies while begging the media to bury Romney on fact-checks, the public has gotten a taste of what this man in the White House is about in comparison to a real leader.

We should see a change in the polls, though it’s entirely possible that change will show up in even more heavily skewed poll samples. But no matter. The momentum of the race has altered perceptibly, and there is no spinning that.