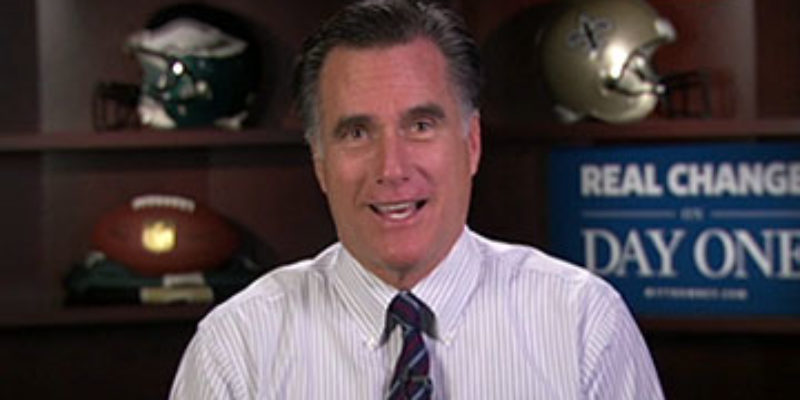 Mitt Romney hasn’t done a lot of “soft” interviews in this campaign; what he’s done has been a lot of straight-news interviews.

Looking back on it, that was probably a mistake.

Compare the reactions to softball questions asked by Chris Berman at halftime of the Saints-Eagles Monday Night Football game earlier tonight, and you’ll see Romney hit his interview out of the park.

First, he looks worn out and depressed. He looks like he needs a golf weekend and 16 hours of sleep. Which is understandable, as he’s done nothing but relentlessly campaign in front of dwindling crowds for as far back as we can remember. And there has been virtually no governance in that stretch of time, either – there certainly wasn’t any as Obama’s Muslim friends sacked American embassies and diplomatic missions across the Middle East and parts beyond, we can’t see much evidence of governance while the East Coast version of Katrina plays out amid freezing temperatures and a mayor and governor in New York just as incompetent and ridiculous as Kathleen Blanco and Ray Nagin were and we certainly don’t see any governance as the nation hurtles toward the fiscal cliff.

For someone who’s honestly qualified for the job Obama holds, tackling these issues would be energizing and addressing them would be seen as an opportunity to prove oneself worthy of re-election rather than chores to be endured before returning to the reality show that is his perpetual campaign.

But he doesn’t even do that well. Asked about his hometown Bears, Obama manages to irritate Wisconsin voters by lighting up and bragging about them. Asked about what his four years in office has taught him, he fails to answer – saying he already knew Americans are hard-working and decent and so forth, and very noticeably using the telling word “they” – rather than “we” – to describe his countrymen.

Should it not rub you the wrong way when your president thinks of you as “they?” It’s a small thing, but not imperceptible.

He then dwells on the development of a college football playoff, which Berman jokingly says is a promise kept. It comes off as grasping the way he latches onto it.

Compare that to Romney’s answers.

Unlike Obama, Romney doesn’t come off as tired. He comes off as spry, energized and fired up – and he remarks on that fact, saying it was a surprise to him that the more intensive the campaign the more energy he drew from the crowd.

Then, asked about his favorite team Romney says it’s the Patriots since he’s been in Boston for 40 years. And jokes – in contrast to Obama on the college playoffs – that since he got blamed for all the things that went wrong as governor in Massachusetts that he’s takin’ credit for the Patriots and Red Sox winning titles, gosh darnit.

But then a serious question about what societal issues in sports most need to be addressed and he talks about performance-enhancing drugs and the fight against them. He doesn’t mention Lance Armstrong, though clearly that’s who he’s talking about, but brings up the fact that when he was running the Olympics the idea of athletes testing positive for steroids or some such substance and devolving achievement into scandal was what kept him up nights, and how underlying the performance-enhancing drug issue is the importance of society developing the kind of character in its people where the desire to win by cheating is lessened.

And finally, asked about what sports has taught him about politics Romney delivers a coup de grace by noting that in the Olympics the most important thing one notices is how – for all the right motivations – people will rise to a level of achievement not previously thought possible.

“You see people who when they’re pushed to their limit are able to dig extraordinary deep … with determination, and passion, conviction, sometimes patriotism, loyalty to their teammates. It’s a place where you see what is beneath the surface of an individual human being and you come away inspired.”

The only mistake in the entire presentation is a small one – namely, that Romney uses the word “sport” instead of “sports,” which comes off as a bit plutocratic. That said, it’s hardly a gaffe on the scale of referring to one’s countrymen in the third person. That’s something less perceptible than “they,” but it still gives off the aristocratic vibe Romney can’t really use.

But even with that, Romney shows himself to be a man of substance and perception, and a man who understands humanity and what drives people. Obama is a Bears fan who can’t even rise above a pat answer about what he’s learned about America from four years of running the country.

More interviews like this could have opened up a margin for Romney. This might be a case where his more conservative approach to campaigning might have led him to a missed opportunity.

Hopefully one he could afford.