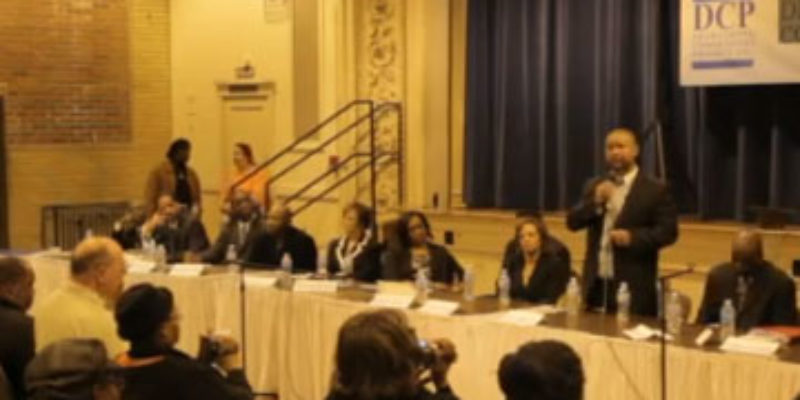 His name is Paul McKinley, and he’s a Republican running in the special election to replace Jesse Jackson, Jr. as the congressman from Illinois’ 2nd District, which is a black district in Chicago…

McKinley doesn’t have much of a chance to win. But that’s OK; with the state of the Republican Party in the black community at present you don’t judge success by whether you actually win elections in black districts.

Instead, you judge it by how much of the vote you can get and keep consistently.

Right now, that number is south of 10 percent. It needs to get north of 20 percent. If it does, the Democrats will struggle to win elections statewide or nationally.

In November, blacks made up 15 percent of the electorate. Mitt Romney got only one percent; Barack Obama the other 14. If Romney had managed to get four percent, or 26 percent of the black vote, he’d be getting inaugurated on Monday.

Is 26 percent a reasonable expectation now? No. Half that number would be a good start, and let’s work our way up.

How do you get the black vote if you’re the GOP? If you listen to the Beltway establishment, they’ll tell you it has to be done by going into the black community and talking about things like empowerment zones and school choice.

Yeah, maybe. Kinda-sorta. Empowerment zones and school choice aren’t bad pieces to the puzzle. But some white dude from the suburbs going to speak to a black church and giving a standard white-dude stump speech about policy? Sorry, you’re wasting your time.

Remember Mitt Romney’s speech to the NAACP last year? He did well there, and he got a little respect…

But nothing in that speech excited the crowd. He got a tepid reaction from a bunch of people invested in the Democrat Party.

What if Romney had asked some uncomfortable questions in that speech? What if he pointed out that blacks are 13 percent of the population and 40 percent of the abortions in this country and why is that? What if he questioned why the folks in that room are all aboard for gun control when they know as well as anyone that the people they don’t want to see have guns aren’t interested in what the law says, and so gun control in the black community merely disarms the peaceful citizens and makes them perpetual victims of the criminal class? What if Romney had asked about why ever since the Democrats pushed through a minimum wage hike in 2009 black unemployment, and particularly among black teenagers, has skyrocketed?

Would that have helped Romney with the people in that room? Probably not. Would it have helped him with the black community as a whole? How could it have hurt him? It’s not like you can do any worse in politics than getting beat 14-1.

But well-dressed white dudes like Mitt Romney aren’t going to move the black vote. You need an army of agitators like Paul McKinley. You need them to be running in every black district, in every election cycle. You need them despite the fact they know they’re going to lose in all probability, because their job isn’t necessarily to win but to carry a message – namely, that the black political establishment is a corrupt enterprise which profits from the suffering of real people in that community and is so rife with hypocrisy and self-dealing that it is no longer legitimate – and cause trouble.

Here was a guy who sounded a little like what we’re talking about. To this day his name’s on high schools and streets in black neighborhoods all around the country – even a community college in Chicago…

And you need them to have funding. Lots of funding. Enough funding that when they run for office, they’ve got as much money as the Democrats who are likely to win have.

Some of these guys might turn out to be talented enough politicians that they do get elected to the city council or mayor or even Congress. But for right now, we need to look at that as a bonus. What’s more important is to build a constituency, and even more important than that, to break down the other guy’s institutions.

It’s straight Saul Alinsky tactics, turned on the Left. We need to adopt them, and right now.

Interested in more national news? We've got you covered! See More National News
Previous Article Word Is Rand Paul Will Run For President In 2016…
Next Article SADOW: A Congressional-District Electoral College Would Make For Accountability