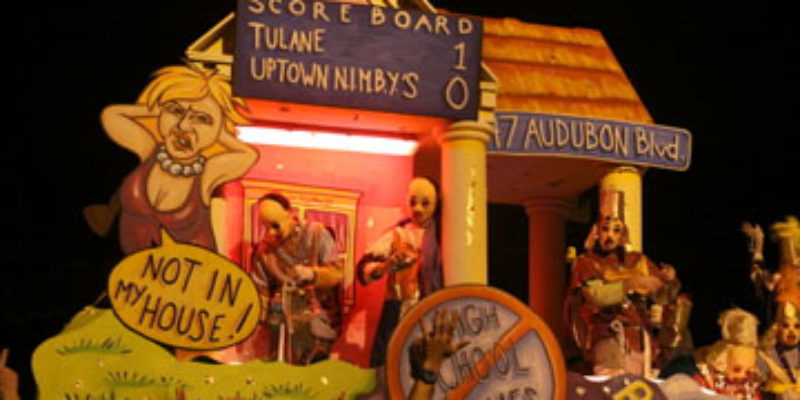 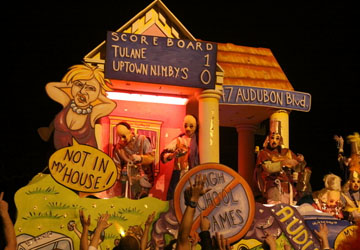 To think it’s just plain Tuesday in almost all the other states.

Mardi Gras is a time of fun, frivolity, marching bands, booze, floats and in some instances political satire.

While some Carnival krewes (no sic) stick to generic themes, a handful engage in clever (and raunchy in the case of the walking group Krewe du Vieux) political satire and social commentary. Because the aforementioned tends to incorporate imagery not suitable for PG-13 news and politics websites, their floats will not be included in the rankings.
After all, how does one quantify a mechanical representation of an aged newspaper publisher sodomizing a naked woman symbolizing the state’s largest city?

I should point out that the rankings are not necessarily a reflection of my sympathy with the point of view expressed through the float described.

9. “Dairy” The all-female quasi-super krewe Muses chose for its 2013 theme, “Makin’ Groceries Muses Style”, a play on a popular slogan from Schwegmann’s, a now defunct New Orleans area supermarket. The satirical damsels rolled out floats related to grocery aisles and tied the item categories with notable people or events. In a departure with Muses’ standard operation procedure, they employed subtlety to get their message across as opposed to using more words than allowed by Twitter. Sometimes their floats looked like they were wrapped in the comics section and they were mocked by another satirical krewe for their wordiness. Apparently they got the message. “Dairy” features two cow brides kissing with the words “Just Dairied” with Chick-Fil-A’s trademark lettering and misspelling on the side panels. The reference was to the brouhaha from last year where gay activists boycotted the chicken chain for their social positions.

8. “Thar She Blows” The wagon-wheeled parade from the Knights of Chaos ambled down Saint Charles Avenue with the theme “Chaos Goes Overboard”, featuring floats containing nautical puns. The tie-in here is Moby Dick, represented by a certain former Secretary of State, and the image of Iranian President Mahmoud Ahmadinejad sitting on top of a mushroom cloud. What made this float really amusing was that I just so happened to be standing next to a large Iranian family when it rolled by.

7. “Canned Goods” Two villains received a great deal of attention from the Mardi Gras krewes this season. One of them was the Times Picayune. Howard Avenue was lampooned graphically by Krewe du Vieux in several treatments and by specific floats in Muses, Chaos and Krew d’Etat. Sticking with simplicity, Muses included the TP on their “Canned Goods” float. Images of gray cans listed with positions that were reduced when the daily transitioned into a sorta-daily show the paper’s itemized savings.

6. “The Godfather” Krewe d’Etat is the third mocking krewe that parades on the Uptown route. Instead of a king they have a sabre-waving dictator clothed in Napoleonic garb. The 2013 theme was “The Dictator’s Reading Room” as the krewe referenced famous books with the objects of their satire. “The Godfather” features the Crescent City’s other bête noire, NFL Commissioner Roger Goodell – suspender of coaches, pilferer of draft picks and slayers of at least one football season. Goodell was represented as Don Corleone (not the worst portrayal of Goodell in Mardi Gras 2013- see Krewe du Vieux). Of amusement is the headline “Gregg Williams sleeps with the fishes”, a timely reference to the former Saints defensive coach’s cooperation/snitching to Goodell about the Saints’ alleged bounty program. Also of note is a painting on the backside of the float showing what I assume to be Tom Benson kneeling to the NFL commissioner beseeching “Let me be your friend”. The float was preceded by a group called the “Dancin’ Bounty Hunters”, in which the troupe wore #51 football jerseys while two other individuals were pushed along in wheelchairs, one curiously sporting a Kurt Warner jersey and the other a Brett Favre jersey.

5. “Leviathan” NFL owner Tom Benson and his granddaughter/Saints co-owner Rita LeBlanc always seem to be the butt of d’Etat’s humor. In “Leviathan”, Benson is made to look like a monarch and the sides of the float catalog his assets: the Saints, the Pelicans (nee Hornets), a television station and car dealerships.

4. “U.S.S. Constitution” Consistent with its nautical theme, Chaos’ “U.S.S. Constitution” float shows President Barack Obama as a pirate with two large syringes in the place of crossed bones. The float parodies how the questionably constitutional ObamaCare will bring in new taxes, decreased coverage and government meddling that will “stick it” to the people in the end.

3. “Cap’n Crunch” One of the cleverest floats of Mardi Gras, features a large scroll representing New Orleans city government’s budget crunch and all of the things being cut, including fire protection, sanitation, street work and police despite the city’s high taxes. Mayor Mitch Landrieu is shown sporting a Cap’n Crunch hat on the float’s panels.

2. “The Bread Aisle” Muses took shots at both parties with their “Bread Aisle” float though they paid an “objective” compliment to one Republican. The float featured several brands, including “GOP White Bread with Extra Dough”, “Mitt Romney’s Plain White Bread”, “Uncle Newt’s Moon Pie” and “Biden’s Blunder Bread”. “Paul Rye” was advertised as 0% fat and “good 4 you”.

1. “Confederacy of Dunces” Any float that shows Mitt Romney as Ignatius J. Reilly, (Ignatius J. Romney) complete with green hunting hat is an instant-win. Sean Hannity and Rush Limbaugh, both wearing dunces caps, are shown misreading poll numbers while Sarah Palin and John McCain are caught on Fortuna’s Wheel. Ryan, not being as dreamy in the eyes of Krewe d’Etat as he is by Muses, is shown grimacing at a hot dog cart. The float closes with a parting shot from W, grinning about how though mocked now, he did win two elections.