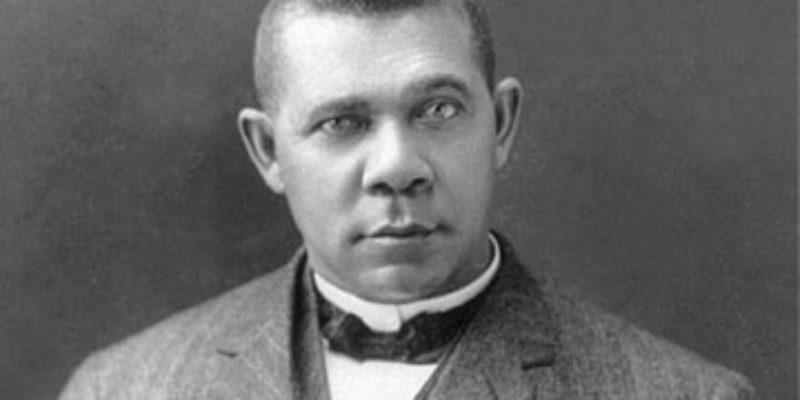 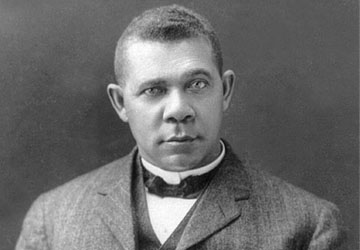 …and it’s a colossal shame nobody knows who he was anymore.

And like Frederick Douglass, who we’ve talked about here at the Hayride as a figure conservatives and the Republican Party should restore to his proper place of reverence, Booker T. Washington – and his ideas – must be reclaimed.

Washington (1856-1915) was born into slavery in Virginia – his mother was a slave and his father was a white slaveholder – and educated at what is now Hampton University and Virginia Union University. An educator, he was named the first head of Tuskegee Institute in Alabama in 1881.

And at Tuskegee, Washington engaged in an activism notable for its civility and pragmatism. What he did with that institution was something that, if Hollywood (who will never make a movie about Booker T. Washington; the best we’ll get was a short 1984 TV movie about him) were to depict it in film, would not be believed…

The organizers of the new all-black state school called Tuskegee Normal and Industrial Institute in Alabama found the energetic leader they sought in 25-year-old Washington. He believed that with self-help, people could go from poverty to success. The new school opened on July 4, 1881, initially using space in a local church. The next year, Washington purchased a former plantation, which became the permanent site of the campus. Under his direction, his students literally built their own school: making bricks, constructing classrooms, barns and outbuildings; and growing their own crops and raising livestock; both for learning and to provide for most of the basic necessities. Both men and women had to learn trades as well as academics. Washington helped raise funds to establish and operate hundreds of small community schools and institutions of higher educations for blacks. The Tuskegee faculty used all the activities to teach the students basic skills to take back to their mostly rural black communities throughout the South. The main goal was not to produce farmers and tradesmen, but teachers of farming and trades who taught in the new schools and colleges for blacks across the South. The school expanded over the decades, adding programs and departments, to become the present-day Tuskegee University.

Washington’s idea, enunciated in his famous 1985 Atlanta Address and his autobiography Up From Slavery, was that blacks in the post-Reconstruction era weren’t going to accomplish a lot by focusing on confrontation as a means to achieve political power and civil rights. Having been the nation’s most prominent black educational figure of his day – not just as the head of Tuskegee Institute but also as a result of his running a massive effort to build schools for rural blacks (he would ultimately play a part in building an astonishing 5,000 of them thanks to prodigious fundraising efforts and the cooperation of such capitalism luminaries as George Eastman of Eastman Kodak, Henry Huttleston Rogers of Standard Oil, Julius Rosenwald of Sears, Roebuck & Co. and others) – Washington saw the colossal changes the Industrial Revolution was bringing to American society and recognized that job skills, rather than political activism, were the black community’s salvation.

As such, Washington urged blacks to focus on the industrial trades and marketable skills of the day as a means of carving out a strategic niche. He believed that if blacks were known as the best builders, machine operators, train engineers, bricklayers or other operators of what was state of the art technology of the time, that two things would happen. First, the society at large would have little choice but to recognize the power of their achievement and their value to the economy, and second, with blacks in demand as a result of possessing those skills the transition to full participation in civil and political society would happen more quickly and with less acrimony, confrontation and violence than otherwise.

Even in the South.

But while Washington achieved great influence on the national political scene – he was a close advisor to Republican presidents Theodore Roosevelt and William Howard Taft – his approach was derided by others in the black community. That element was most notably personified by the Harvard-educated, W.E.B. Dubois, who co-founded the National Association for the Advancement of Colored People. Born in Massachusetts and raised in an environment of racial tolerance (his Harvard tuition was sponsored by local white church parishioners), DuBois was a younger contemporary of Washington whose more confrontational philosophy of training an elite cadre (the “talented tenth”) of agitators to bring legal cases against Southern segregationists and leverage political power where possible to defeat abusive treatment of blacks through legislation ultimately manifested itself in today’s “civil rights” movement. But DuBois lacked the personal accomplishments of Washington; he was a professor at Atlanta University and a prolific author and commentator and certainly a leading figure of his time, but he never actually ran much of anything – particularly not anything like the educational project Washington fostered.

Interestingly enough, while Washington was derided by DuBois as an accommodator, a latter-day “Uncle Tom,” behind the scenes Washington did a great deal to raise funds for legal challenges to the abuse of black civil rights. He just didn’t make a big deal about it because his vision was a black community rising into the middle class due to its contributions to the economy rather than its prolific litigiousness, political agitation and ultimately a redistributionist agenda among its political elite.

And while DuBois’ more aggressive approach to the injustice of American society on racial lines found more of a popular reception within the black community, that approach did not actually help blacks to achieve the economic power Washington saw as so crucial. DuBois’ legacy, which contains the heights of Martin Luther King’s inspiring efforts to achieve legal and civic parity for blacks, also has claim to today’s rogues gallery of “civil rights” demagogues – Jesse Jackson, Al Sharpton, Ben Jealous and others. Washington would identify much more with the Herman Cains, Ben Carsons and Harry Alfords of the world; namely, blacks who have earned great public esteem not for successful political agitation but rather for accomplishments in things like business and medicine.

DuBois isn’t much better known than Washington in this era of historical illiteracy, but everyone knows what the NAACP is and what it stands for. And it’s the failure to learn and apply Washington’s lessons of personal development and accumulation of marketable skills in so much of the black community which accounts for the failure of so many in that community to capitalize on the achievements of the civil rights era.

A selection of his famous quotes follows. What kind of country would we have if the dominant “civil rights” figures in the black community were internalizing these and spouting them as a mantra?

“Character, not circumstance, makes the person.”

“I have learned that success is to be measured not so much by the position that one has reached in life as by the obstacles which he has overcome while trying to succeed.”

“I have begun everything with the idea that I could succeed, and I never had much patience with the multitudes of people who are always ready to explain why one cannot succeed.”

“We all should rise, above the clouds of ignorance, narrowness, and selfishness.”

“I would permit no man, no matter what his color might be, to narrow and degrade my soul by making me hate him.”

“Great men cultivate love and only little men cherish a spirit of hatred; assistance given to the weak makes the one who gives it strong; oppression of the unfortunate makes one weak.”

“There are two ways of exerting one’s strength; one is pushing down, the other is pulling up.”

“If you want to lift yourself up, lift up someone else.”

“In order to be successful in any undertaking, I think the main thing is for one to grow to the point where he completely forgets himself; that is, to lose himself in a great cause. In proportion as one loses himself in this way, in the same degree does he get the highest happiness out of his work.”

“Among a large class, there seemed to be a dependence upon the government for every conceivable thing. The members of this class had little ambition to create a position for themselves, but wanted the federal officials to create one for them. How many times I wished then and have often wished since, that by some power of magic, I might remove the great bulk of these people into the country districts and plant them upon the soil – upon the solid and never deceptive foundation of Mother Nature, where all nations and races that have ever succeeded have gotten their start – a start that at first may be slow and toilsome, but one that nevertheless is real.”

“The wisest among my race understand that agitations of social equality is the extremist folly, and that progress in the enjoyment of all privileges that will come to us must be the result of severe and constant struggle rather than of artificial forcing.”

And finally, a blistering indictment of DuBois and his ilk which resonates today…

“There is another class of coloured people who make a business of keeping the troubles, the wrongs, and the hardships of the Negro race before the public. Having learned that they are able to make a living out of their troubles, they have grown into the settled habit of advertising their wrongs — partly because they want sympathy and partly because it pays. Some of these people do not want the Negro to lose his grievances, because they do not want to lose their jobs.”

We talk a great deal on this site about the failure of the Right to engage in the culture, and how most of the political problems of the conservative movement (and its reputed political representative the Republican Party) arise from a failure to properly tell its story to the American people.

The failure to insure that Booker T. Washington’s insights and accomplishments are maintained as an integral part of the Right’s message on race relations is a sad, shining example of our deficient message.

UPDATE: The quotes above were researched and put together by Christopher Harris, whose Facebook page is a treasure trove of history and common sense.