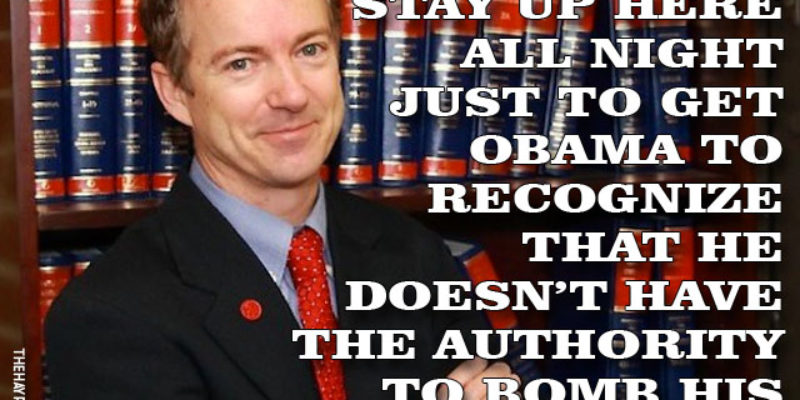 So I spent most of the night at my Uncle T-Roy’s crib; he’s got that Dish Network where you can pick up the SEC Network in HD.

Which they tell me you can’t in Baton Rouge; my cousin T-Bill sez if you try to watch an LSU hoop game on a Wenzday night they make you watch it on that Channel 16 thing and it looks like tryin’ to watch a bad YouTube from somebody’s crappy cellphone on a fullscreen on your computer.

So Uncle T-Roy’s pad is the place to be if you wanna watch Hickey and Carmouche whip Ag’s ass in College Station. That’s my story and I’m stickin’ to it.

Turns out it’s cuz Rand Paul is doin’ one o’ them filibusters. And everybody’s watchin’ it.

Most the time, a filibuster isn’t worth watchin’. All they usually are is 40 dudes and dudettes in the Senate gettin’ together and sayin’ “we’re filibusterin’ this here bill,” and unless the number of filibusterers goes below 40 that bill goes away.

But the old-time filibuster? You never see that. Nobody does the Mr. Smith Goes To Washington version much anymore.

But Paul ain’t happy about this business of Obama’s people not bein’ able to give a non-squirrelly answer on whether they think it’d be OK to hit an American with a missile from a drone…in America.

Which is kinda like sayin’ that doin’ another Waco would be OK, only this time it’s Eric Holder callin’ the shots instead of Janet Reno. And while Reno looked like a cross between Billie Jean King and an anorexic alpaca, Holder inspires a little less confidence…

That gave Paul the heebie-jeebies, so he decided he’d go all Jimmy Stewart on this guy John Brennan – who might actually be a Muslim, from what the word is – bein’ the new CIA director. And he filibustered the nomination. He said he’d end the thing if the White House would just say “You’re right, bro – we have the FBI and the cops and so on to handle Americans in America who might be bad news, and so we don’t think we need drones fo’ dat.”

And the thing was such a drop-dead obvious thing that it turned into a sensation for a lot of people. Because, well…

And while Rand ain’t always spot on with this kinda stuff, he comes along and he makes Obama look like a turd for not agreein’.

And he did it for like 13 hours. Got a bunch of other Republicans to come along and share some time with him, too. Ted Cruz came in and read the St. Crispin’s Day Speech from that Hank The Fifth play, and Reagan’s A Time For Choosin’ speech, and some other stuff. And Marco Rubio brought him some water. Louie Gohmert, who’s not even in the Senate, showed up with a Snickers bar and some cough drops.

Even Ron Wyden, who’s a Democrat but is nevertheless all creeped out about drones, picked up the rope.

And what was pretty cool too was that toward the end some other guys – Mitch McConnell, John Thune, Mike Lee and Jeff Flake – chipped in. Plus Pat Toomey and Ron Johnson, and what made that a pretty cool deal was that Toomey and Johnson had just come back from goin’ to some dinner Obama had thrown for a bunch of GOP Senators. In other words, like “Hey Obama, thanks for the fricasse and the nice Malbec, but I gotta roll – I’m due back at the Senate so I can throw some poo on your drone policy in front o’ God and errybody.”

It didn’t look good. The whole country got a good look at it… 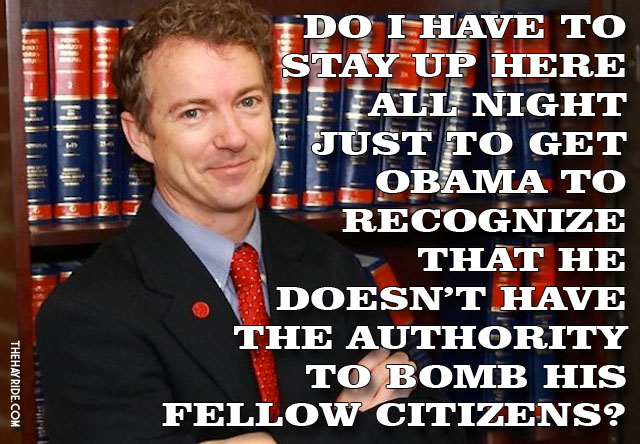 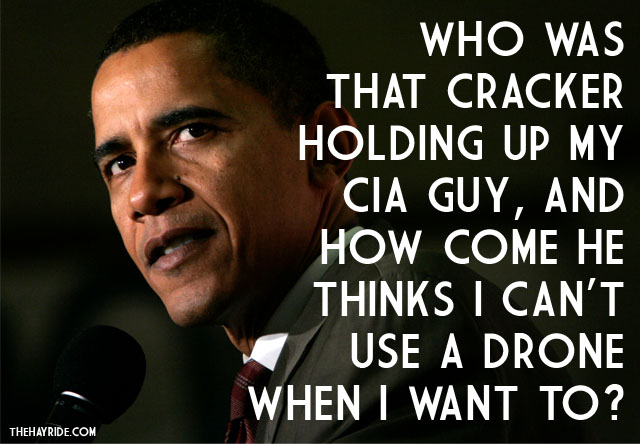 Obama’s not actually the worst-lookin’ guy in the bunch tonight, though. That would be this dude, who went and shared a souffle’ with the Drone Commander…

Anyway, eventually, Paul started witherin’. See, you can’t leave the chamber if you filibuster Jimmy Stewart-style. You can’t even siddown. And unless somebody brings you somethin’, you’re like Spalding from Caddyshack where refreshments are concerned – you’llgetnothingandlikeit.

So unless Marco Rubio wants to do like his dad and bartend this fiesta, or Gohmert’s gonna be the Candyman, ol’ Rand’s gonna have trouble keepin’ it going no matter how many Broadway auditions Ted Cruz will hook him up with or how many Wiz Khalifa or Jay-Z quotes Rubio can pull out of his wahoo.

And the folks at U-Surrp, who from what we unnerstand just got hooked up with four nights in the Lincoln Bedroom for the low, low price of half a mil (so long as the check don’t bounce), offered up a lil’ temptation to get him outta there… 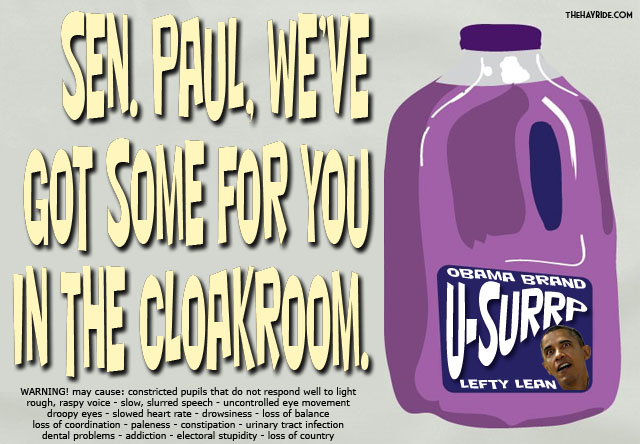 But in the end, that wasn’t what did it. In the end what killed the Randibuster was somethin’ pretty obvious… 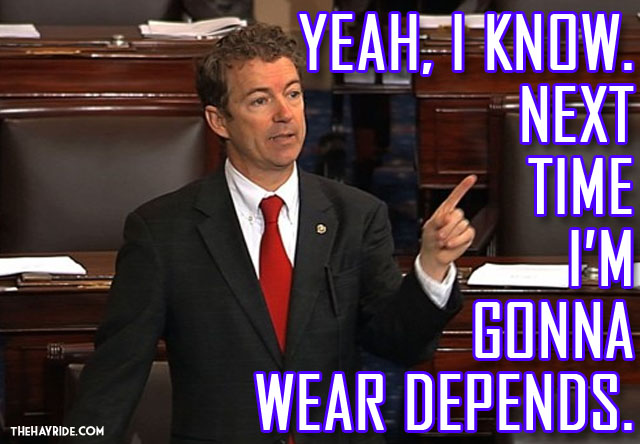 That’s right, bro. You gotta come prepared. Bring an ice chest, and maybe an empty bottle, next time you wanna be Mr. Smith.

Either way, Paul’s a patriot. Good on him for stickin’ it to Obama and Holder tonight. Somebody’s gotta do it to this crowd.

Interested in more national news? We've got you covered! See More National News
Previous Article FLEMING: Canceling White House Tours Because Of The Sequester? SMH
Next Article Where Was Vitter?