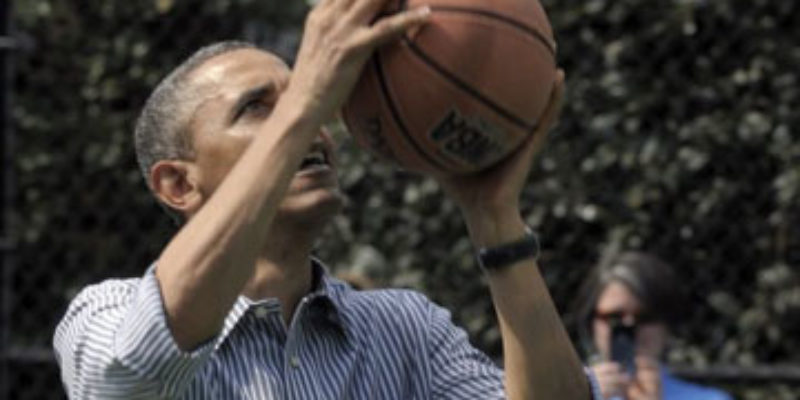 After five years of the media touting our president as a prodigious athlete and considering him “cool” based on his purported skills on a basketball court, today’s events at the White House Easter Egg Roll ought to be something of a shock.

Maybe Obama’s three-point stroke is a casualty of the sequester. Or maybe his hoops ability was as much of a fraud as the rest of his supposed repertoire.

Either way, this was emblematic of Obama on countless levels…

He missed his first 14 shots, including an airball and a layup that hit nothing but the backboard. Then he gave the ball to a 10-year old who made a layup, before finally making on of his own. And eventually the president was able to make an outside shot.

This from a president who invites NBA players to the White House for pickup games and supposedly plays basketball rather than sitting in on policy meetings.

And this from a president whose response to every domestic policy issue is to hit the road and make speeches about it rather than govern, and be accountable for that governance.

Obama is pretty good at looking like he’s doing his job. In basketball parlance, he’d make Dick Vitale’s All-Airport Team. He looks terrific coming off a plane. Not bad in his uniform.

But when the shooting starts, Obama belongs on the bench. That .091 isn’t just his record on the White House hoops court; it’s about what he looks like in generating results as a president.

One more thing that jumps out at you – namely, anybody else who was missing shots left and right in front of TV cameras would be desperate to let somebody else shoot. But not Obama; he was going to keep at it until the cows came home. That’s a pretty good analogy to his brand of government as well; it’s obvious the federal government has long since transgressed its ability to do anything effectively, but Obama and his crowd are still desperately grabbing for that basketball in the vain hope that if they can get just one more shot at the basket they might just knock it down.

Three years, eight months and change. That’s what we’ve got to endure until somebody else will be making an ass of himself trying to make shots in front of the cameras at the White House basketball court.