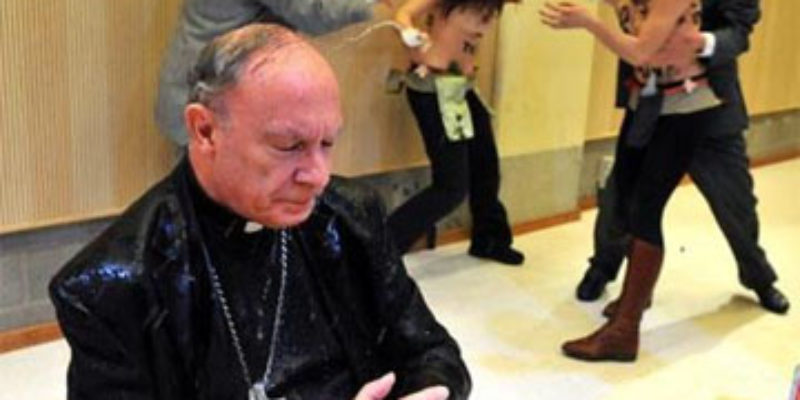 A picture which ought to be scandalous, but in 2013 it isn’t really all that surprising.

It’s from a conference at a university in Brussels. The Archbishop of Mechelen-Brussels, Andre-Joseph Leonard, was giving a talk on blasphemy.

The topless harpies in question are members of a feminist group called “Femen,” which is on the gay-marriage warpath. Leonard has become “controversial” for stating Church teachings on homosexuality in Belgium, and because of that he’s taken pies in the face while conducting church services, among other indignities.

And yesterday, the Femen brought a plastic bottle statuette of Our Lady of Lourdes which was full of water, and proceeded to squeeze it out on Leonard, dousing him as he sat peacefully and refused to look at them. 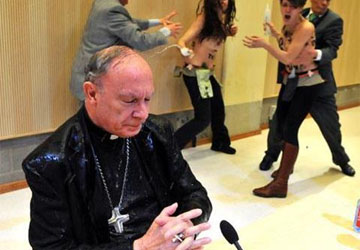 The dignity of this man of the cloth as he’s attacked and humiliated by a gang of what could best be called barbarians seems a fairly on-point characterization of what Western civilization is coming to. That it’s in Belgium, which is much further down the road of civilizational decline than America is, doesn’t offer much solace.

Leonard should be congratulated. Not just for standing by his beliefs and the teaching of the Catholic Church – some of which the lefties in Belgium don’t like very much – but for showing his tormentors the strength and peace to refrain from giving them the reaction they seek.

Following the attack, Leonard kissed the statuette as a devotional message before leaving.