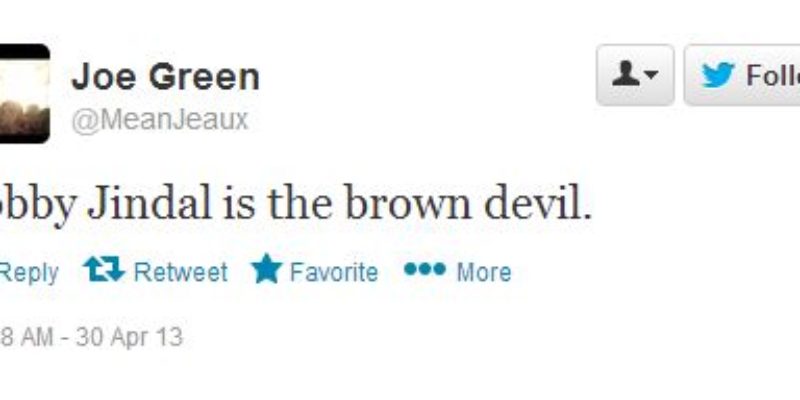 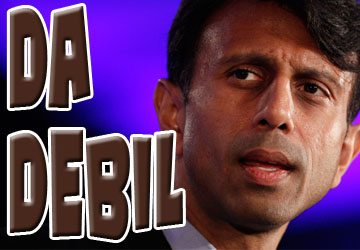 Yesterday on the State Capitol steps was the “Enough Is Enough” rally, at which a collection of left-wingers straggled up to the microphone to engage in a bitch-fest about Gov. Bobby Jindal’s opposition to the Obamacare-Medicaid expansion.

The Soros-funded organizations which are popping up like mushrooms around the state treated it as a mini-Woodstock. But it only drew about 100 people, according to the Times-Picayune (the Advocate said 400 people were there), most of whom were with one Soros-funded mushroom or another.

The general tenor for the rally was picked up on Twitter by the state Republican Party, which seized on a tweet from some clown named Joe Green – who according to his Twitter profile “does video work for Forward Louisiana.” Forward Louisiana is yet another clown-show operation with Hard Left dollars behind it; it’s a brand name of Louisiana Progress, which is exactly what its name suggests it is.

This Joe Green character, who was sending out tweets machine-gun style as the rally was going on, started off with a doozy…

That’s some hifalutin advocacy, no?

The sentiment behind @MeanJeaux’s rather impolitic bleatings was expressed in a slightly more refined form by the speakers at the event.

Like, for example, Melissa Flournoy – who is the new state director for Planned Parenthood, which is building a brand-new abortion center on the corner of Claiborne and Napoleon in New Orleans, just a few blocks away from a couple of housing projects. Flournoy says Louisiana’s working people need access to health care from the government, without apparently pausing to recognize how broken the system is when people with jobs might have no recourse but the public sector to get health care or bothering to disclose how her employer would get to rake in piles of filthy lucre from the taxpayers should Louisiana surrender to Obamacare…

Sophie Kunen told the crowd that in 28 1/2 days she would turn 26 years old, and under the law, she would no longer be permitted to remain on her parents’ insurance plan.

Her employer doesn’t provide adequate health insurance, she said, so Kunen told the crowd of rushing around to see doctors prior to aging out of her parents’ policy.

She became terrified when asked when she could schedule a follow-up appointment and she realized that she could not.

Because follow-up appointments not paid for by private insurance from one’s employer (Kunen didn’t say where she works, so it’s a bit hard to evaluate her claim; it’s pretty easy to gripe about a lack of insurance coverage through your work when you don’t actually work and one wonders based on the Left’s track record how much bovine excrement was actually at work here) are your responsibility to pay for.

Oh, wait – we do know who Sophie Kunen works for. Forward Louisiana! 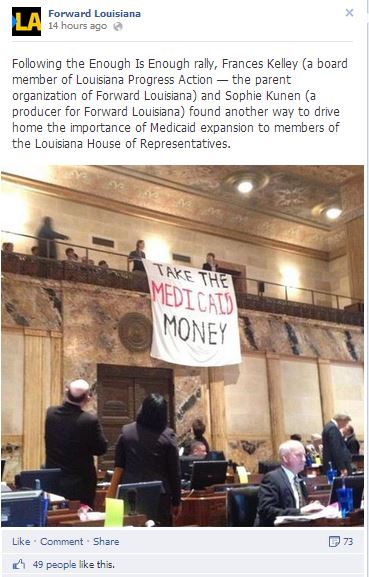 Meanwhile, @MeanJeaux got a case of the screaming reds when the state GOP called him out for rapping the Governor as The Brown Devil…

This afternoon, Louisiana Progress and other liberal groups held a rally on the capitol steps where they argued for Louisiana to accept the expansion of Obamacare, along with pushing for the passage of higher taxes and more government spending.

While we are all allowed to have a difference of opinion on these important public policy matters, it is disappointing to see some members of the rally engage in derogatory and racist rhetoric.

Joe Green, an employee for Forward Louisiana, which is an arm of Louisiana Progress, tweeted during the rally that Governor Jindal is “the brown devil.”

We call on Louisiana Progress, Forward Louisiana, and Mr. Green to apologize for this racist and divisive comment.

Surely we can all have a mature discussion about the important policy proposals this legislative session and not engage in derogatory name calling.

The response was something most people take Imodium for…

Honestly had no idea that @lagop paid attention to “EVEYTHING”I have ever tweeted.

@lagop Just give me the chance to respond. And I will explain the thoughts that I could not articulate atm I tweeted them.

Like seriously any fool with iPhone could have said what I said. Why do y’all care? twitter.com/MeanJeaux/stat…

@lagop why do y’all refuse to talk to ‘any’ media is what I want to know?

The @lagop treats me as an enemy when all I wanna do is talk to them if only for a few minutes.

Joe Green didn’t say what college he goes to. That might be at the request of the college.

But the “adults” at Forward Louisiana don’t seem to be setting a much more civil tone. There was this yesterday… 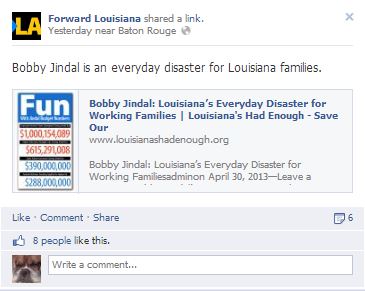 One thing which is hard not to notice about the mushrooms is that they seem not to generate much sound judgement out of of the millions of dollars flowing through them. We saw that in technicolor with the Stand With Diginity crowd, and now there’s the @MeanJeaux-Sandra Kunen crew to go with Melissa Flournoy’s singing of the Governor’s phone number like it was 867-5309.

But the effort is determined, and ongoing. And it never ceases to pick up media attention – whether that helps the cause or not.

Considering that a Senate committee voted 4-3 to move the Medicaid expansion forward, driving us ever closer to a showdown between the House and the Senate, the mushrooms are probably not done clowning at the Capitol steps, either.

Interested in more news from Louisiana? We've got you covered! See More Louisiana News
Previous Article A Conservative Defense of Common Core
Next Article SADOW: Are The Fiscal Hawks Figuring Out How To Play This Game?