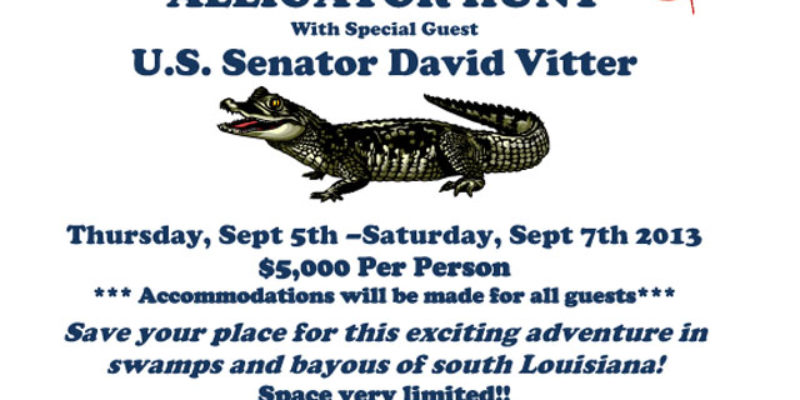 POLITICO and the Washington Examiner both have stories up about the “Louisiana Bayou Weekend” the Fund for Louisiana’s Future is hosting in early September. POLITICO got their hands on a copy of the invitation, which touts “cajun cooking,” an “airboat swamp tour” and an “alligator hunt” as part of the festivities… 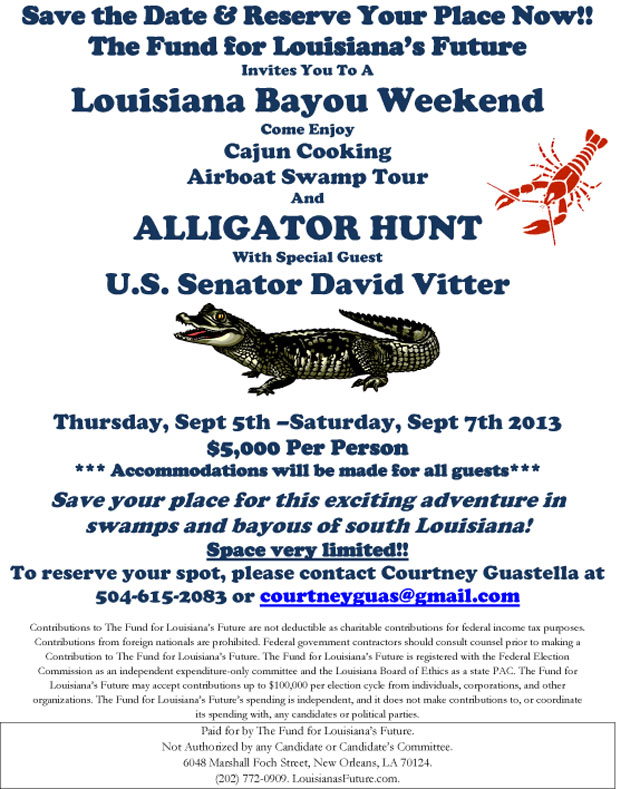 The invitation lists Courtney Guastella, a former finance director for Vitter’s Senate campaign, as the point of contact for attendees. The group’s chairman and treasurer is Charlie Spies, the former head of the Mitt Romney super PAC Restore Our Future.

Spies said there’s “no way to draw conclusions” about Vitter’s plans based on the event for a group that can spend to support the senator in both state and federal elections.

“He is the special guest for a fundraising event and the funds from that event can be used to independently support him in his future endeavors,” Spies said.

Candidates are allowed to appear at super PAC events but are barred from directly soliciting money for unlimited-donation groups set up to support them.

Vitter, who won a second term in 2010 after surviving a prostitution scandal, has done little to tamp down chatter about his possible interest in a gubernatorial bid in 2015, when incumbent Republican Bobby Jindal is term-limited out of office.

The Fund for Louisiana’s Future was incorporated earlier this year as both a federal super PAC and a state political action committee. It has not yet filed its first report detailing its contributions.

The event invitation makes specific reference to the state-level limit for individual donations to political action committees, notifying potential donors that the group “may accept contributions up to $100,000 per election cycle from individuals, corporations and other organizations.”

Spies said that by taking donations only within Louisiana’s contribution limits, the FEC-registered group ensures maximum flexibility for spending the money down the line.

Vitter’s prospective gubernatorial bid is one of the state’s top political rumors these days, and the event in September is seen, at least by POLITICO, as a response of sorts to Lt. Gov. Jay Dardenne’s slightly more aggressive fundraising efforts.

Well…hunting alligators is probably more aggressive than the dinners Dardenne’s been holding.

In fact, if you want to start the countdown to the left-wing animal rights crowd howling about the poor alligators Vitter and his donors will be killing, feel free. History indicates it’s just a matter of time.

After all, about a year and a half ago when Rep. Jeff Landry did a gator hunt as part of a fundraiser he ran afoul of New York Democrat congressman Gary Ackerman, who took up for the gators…

When we jokingly suggested that Landry’s next fundraiser be a Gary Ackerman hunt, the foppish congressman called the FBI in to interrogate us.

We’re still blogging and Ackerman is no longer in Congress, so when someone assaults Vitter for a similar fundraising event these pages will offer similar treatment.

For Vitter, though, the negative attention of the PETA gang is an asset. Folks in Louisiana are well aware of the negative consequences of a large alligator population in the state’s swamps and there is little support for the gators against those who get licenses to hunt them.

Besides…Troy Landry. Don’t mess with him.

Speculation says it will likely take $6-8 million to win the next governor’s race in Louisiana. At five grand a pop, that’s a lot of gators.

Interested in more national news? We've got you covered! See More National News
Previous Article Dardenne’s 2015 Campaign Is Off And Running
Next Article Jim Brown Thinks The Next Senate Candidate To Enter Will Be…Jindal?