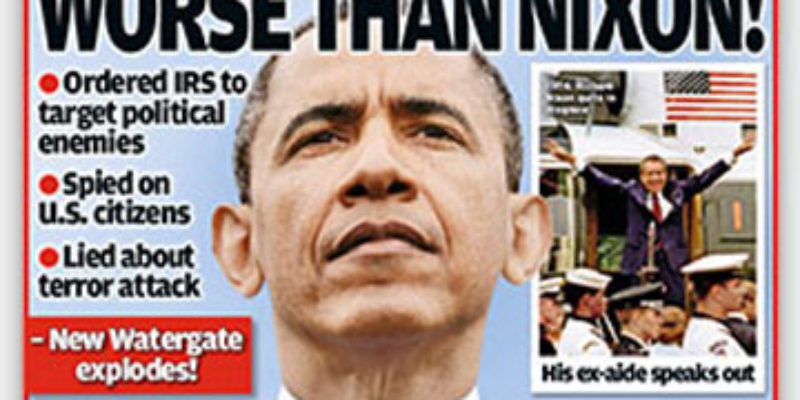 When you’re on the cover of Globe Magazine as being “WORSE THAN NIXON!” it’s not going to help with the low-information/goofball voters you depend on.

But that’s what Obama has going for him this week…

The web excerpt is pretty brutal…

The trio of shocking scandals engulfing Barack Obama are being described as the New Watergate with critics slamming the President as worse than Richard Nixon, who resigned in disgrace. Only this week’s GLOBE reveals the shocking reasons why Obama worries he’ll be impeached and his bizarre behavior caused by stress and fear.

Bear in mind it was supermarket tabloids and other fluff publications which helped get Obama elected. He played the unserious media like a violin and as such used it to destroy both John McCain and Mitt Romney with the low-information vote.

So while Globe Magazine is about as unserious a rag as you can get, it’s pretty bad for the president to be getting crushed on the front page. Those are his voters reading Globe Magazine.

This could be a shift of sorts. The emperor has no clothes.

Interested in more national news? We've got you covered! See More National News
Previous Article VIDEO: Getting Caught In A Tornado…On The Highway
Next Article How About A Billy Goat Attack Video?

"I have COVID, Becca has COVID, and my son has COVID. Becca and I had COVID early on, in January 2020, before the world really knew what it was. So, this is our second experience with the CCP biological attack weaponized virus ... and this episode is far more challenging. It has required all of my devoted energy." - U.S. Rep. Clay Higgins
More Quotes