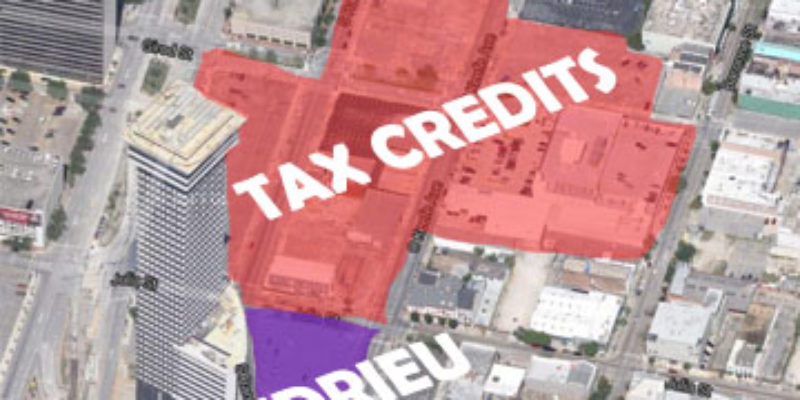 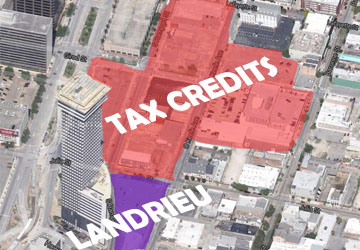 The Baton Rouge Advocate had a piece on Monday which didn’t get a lot of attention among the chattering classes and wasn’t presented with much fanfare, but it’s a good example of how things work in New Orleans and within the urban socialist model in general.

The long and short of the story is that Mitch Landrieu, the mayor of that city and the brother of Louisiana’s senior senator, is securing government tax credits and a new streetcar line to induce the redevelopment and thus property-value increase of land he and his family own.

But it’s a clever plan, and one which you’d expect out of a practiced Democrat pol like Landrieu is.

Because he’s not giving himself a tax credit. He’s giving it to the landowners across the street.

The Landrieu siblings’ parcel — which is currently being used as a surface parking lot — sits in the shadow of the South Market District, a $200 million mixed-use development that proponents say will revitalize a once-forlorn stretch of downtown and create hundreds of jobs. The district is part of the state’s Enterprise Zone, a jobs incentive program that provides Louisiana income and franchise tax credits to new and existing Louisiana businesses that create permanent, full time jobs for one of four target populations, including Louisiana residents and people receiving public assistance. South Market District could get as much as $3.5 million in tax credits through the program.

The surrounding area in the last couple of years has seen the construction of the new Loyola Avenue streetcar line, a recently renovated Hyatt Hotel and the popular Champions Square concert venue outside the Mercedes-Benz Superdome.

Naturally, there’s no corruption here at all. Check out this happy dancing…

That the mayor is part-owner of land in an area where prices could see a bump as new investment pours in — some of it coming from taxpayers — poses no ethical conflict, said Dane Ciolino, a law professor at Loyola University, who specializes in ethics issues.

For starters, the mayor doesn’t own the requisite 25 percent stake that could raise an eyebrow, Ciolino said, and even if he did, it’s not at all clear that the arrangement would create a conflict.

In addition, Landrieu has disclosed his ownership interest to the Louisiana Board of Ethics every year, as required by law. Landrieu said in the disclosure that his shares earn him $5,000 to $25,000 a year.

“I don’t see an ethics issue with it,” Ciolino said in an e-mail. “He disclosed it, which was required. But it is otherwise unremarkable.”

Right – Mitch only owns 11.1 percent of Nineland, LLC, so there’s no ethical issue with improving that property.

His brothers and sisters own the other 88.9 percent. Why, he barely knows them!

Rewarding your siblings is OK, so long as you’re only rewarding yourself to the tune of 11.1 percent.

Nineland owns a total of eight properties around New Orleans, according to the Orleans Parish Assessor’s Office website. The majority of them are adjacent addresses on Julia and O’Keefe streets, which together make up the parcel next to the South Market District.

The lot is across Julia Street from two planned buildings that are slated to contain 364 apartments and 111,000 square feet of retail space.

Those properties are part of the second phase of the mixed-use development that pulls together apartments, retail, restaurants and entertainment destinations in a five-block area bound by Loyola Avenue and Lafayette, Baronne and Julia streets.

The development is just off the newly opened Loyola streetcar line, which was pushed and completed under Landrieu’s watch. South Market is expected to include 500 apartments and 170,000 square feet of retail space. Construction on the first building in the development is scheduled to conclude next year.

And Mitch has been behind this from the start…

Landrieu has not publicly pushed for the district’s creation. But the plan has needed some support from the city to take off. The Industrial Development Board, whose members are nominated and chosen by the mayor and the City Council, granted the project a payment in lieu of taxes, though it was not as generous as the one the developers sought. Just one of the board’s 15 members is chosen by the mayor.

And now, plausible deniability (which probably amounts to good negotiation and the developers failing to provide enough water on Hizzoner’s beak)…

The city’s office of Economic Development and the New Orleans Business Alliance, a public-private partnership tasked with leading economic development initiatives in Orleans Parish, have been working with the South Market developers to bring the development to fulfillment. But City Hall rejected the developers’ request for a fee waiver and for nearby infrastructure investments.

Plus, friends in high places – who naturally have NO IDEA that anybody they know would benefit from this deal…

Rep. Walt Leger, D-New Orleans, a floor legislative leader for the mayor who authored a bill in the most recent session giving the development its final push toward realization, said he wasn’t aware of Landrieu’s connection to the site.

“I never had any conversations with the mayor,” Leger said. “I had no idea that the mayor or any of his family had any properties around this development.”

Leger’s bill, signed into law by Gov. Bobby Jindal last month, expands to $3.5 million the tax credits allowable in the state’s Enterprise Zone incentive program. It also made the zone and tax break applicable to larger projects. The measure was aimed at making the South Market District plan financially feasible.

And finally, Rep. Leger delivers the coup de grace, which is that you shouldn’t worry about the Landrieus getting a nice bump in revenue off that parking lot they own and/or the rent on their properties just next door to that new development, because after all it’s good for the city…

“I would have moved forward with it regardless,” Leger said. “I really do think it’s going to have a positive impact on downtown New Orleans. It’s an additional positive development.”

This property is on the edge of the Warehouse District, which is probably the hottest real estate in New Orleans – which is now the #2 hottest “aspirational” city in the country.

In other words, that developer – which is a company owned by a couple of Tulane grads – doesn’t need those tax credits to make the decision to put up the 577 luxury apartments, a Rouse’s Market and 157,000 square feet of retail on that South Market District property. Go to the South Market website and it says “The South Market District Is At The Center Of The Most Exciting Developments Taking Place Downtown.” It also says this…

Sure, that’s salesy language designed to get retail tenants and people plunking down top dollar for those apartments.

But if it’s not B.S., and obviously they don’t think it is or else they wouldn’t be spending $200 million to build the thing, do they really need the $3.5 million in tax credits?

Yes, yes – they built a streetcar line going past the property. So nobody will need to take the car.

Or maybe they’ll just park in that surface lot across Julia Street. Plenty of spaces to be had there for a small price, right? Who owns that lot, anyway?

George Washington Plunkitt, of Tammany Hall fame, would be proud.

HONEST GRAFT: Taking advantage of the money-making opportunities that might arise while holding public office.

Tammany Hall boss George Washington Plunkitt defined “dishonest graft” as actual theft from the public treasury or taking bribes for making certain public decisions. “Honest graft,” however, simply meant pursuing the public interest and one’s personal interests at the same time. For instance, Plunkitt made most of his money through land purchases, which he knew would be needed for public projects. He would buy such parcels, then resell them at an inflated price.

Said Plunkitt in a famous defense of his actions: “I seen my opportunities and I took ‘em.”