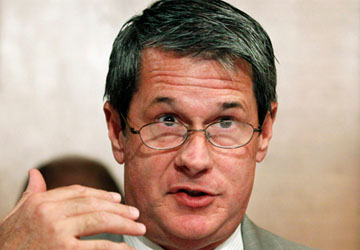 Roll Call reports that the Fund For Louisiana’s Future, the Super PAC started to support a run by David Vitter either for re-election to the Senate in 2016, or more likely for a run at the governor’s mansion in 2015, will show over $700,000 in the bank when the 2nd quarter FEC filings come out, and those filings will show that the fund has raised $750,000 in the first six months of the year.

But a quote in the Roll Call story by Charlie Spies, Vitter’s former campaign treasurer and the treasurer and counsel for the Fund For Louisiana’s Future gives a terrific indication of what this money is supposed to be for…

“The possibility of his running for governor has generated strong support within the business community in Louisiana, which is looking for conservative leadership in the state,” Spies said. “Sen. Vitter has been a key part of supporting conservative state-level candidates that have made the legislature Republican for the first time since reconstruction, and there is sentiment in Louisiana that there’s time for a conservative governor also.”

Yes, that’s a shot across Bobby Jindal’s bow. But it’s also the best indication imaginable that Vitter is indeed going to run for governor.

When Agriculture Commissioner Mike Strain announced he wasn’t going to be running for governor, after declaring his intention to do so months ago, that was a good indication that the field was clearing on the right for a Vitter run.

The word of the $700,000 war chest for Vitter’s Super PAC will likely scare off a lot of other wannabe candidates.

Interestingly, though Super PAC money and straight campaign funds aren’t exactly the  same thing, that war chest would put Vitter in a commanding position at this early stage. The most recent Louisiana campaign filings show the other major potential players in the race will need to ramp things up in a major way to compete with what Vitter has.

John Bel Edwards’ February report showed $37,000 in the bank. Edwards is the Democrat in the race so far.

Gerald Long, the Republican state senator who wants to run for governor, had $282,000 in the bank as of his February filing.

Scott Angelle, the Public Service Commissioner and Jindal ally many think will carry the standard for that faction in 2015, had $48,000 in a campaign account in February.

But three potential candidates who haven’t been thrown around for governor all that much actually have a great deal more in the bank than even Vitter or Dardenne.

John Kennedy, the state treasurer whose name occasionally comes up as a 2015 hopeful, had $2.3 million in the bank. Kennedy’s been a statewide candidate in every  Louisiana cycle since 1999, and in most of those cycles he’s been able to get re-elected without major opposition – circumstances which lend themselves to a big war chest. That’s why Kennedy has been pretty quiet about his plans; he doesn’t need to do a big advance program to get his war chest built up. But most people think Kennedy will just run for re-election rather than get into the governor’s race.

And get this – Newell Normand, the Jefferson Parish sheriff whose name has been thrown around as a potential candidate, had $1.3 million in his campaign war chest as of February. That’s the kind of head start which could propel Normand into the race; he has enough money to pump out a media push to build some name recognition and make himself a factor in the campaign should he decide to get in.

Also, New Orleans mayor Mitch Landrieu, the Democrats’ Great White Hope for 2015, had $1 million in the bank as of February. The problem there, though, is that Landrieu will have to run for re-election next year – and though he’s not likely to draw any major opposition, he may well have to spend some of that million in the race – not to mention he’ll be raising money for re-election for the next nine months while the rest of the gubernatorial field would be raising for the 2015 cycle.

At the end of the day, most people think this race will be about Vitter and Dardenne. If that’s the way it comes down, the PAC disclosure means Vitter would be substantially at parity with the Lt. Governor, and a very interesting race would begin on fairly even terms.