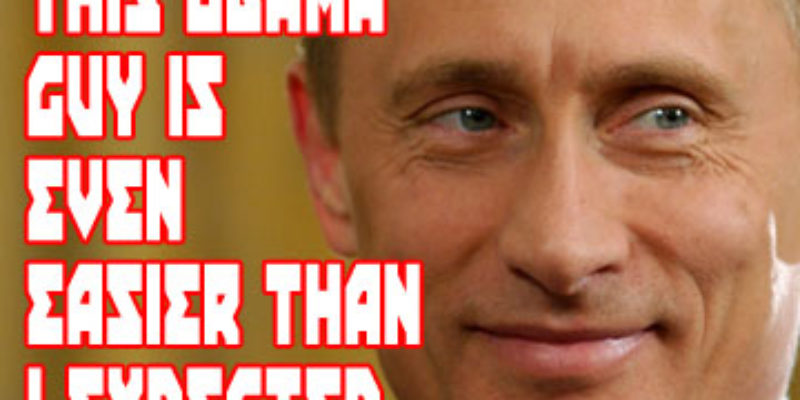 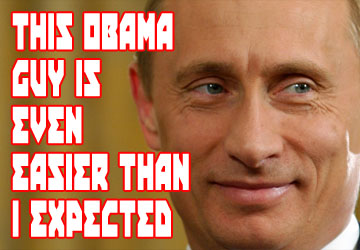 Vladimir Putin, former KGB agent and present President of Russia, has the god-almighty balls to lecture the United States on “insufficient communication between our societies” concerning Syria and the use of violence. If the thought was ludicrous, the action is beyond absurd. But, that’s the state of affairs engendered by Obama, his weak-kneed policies and total lack of a coherent foreign policy in a world demanding strength, integrity and morality in political conduct.

It’s beyond belief a thug like Putin has the testicular fortitude necessary to freely approach America in a leftist and ridiculously partisan publication like the New York Times. He chose to criticize the formerly leading proponent of democratic governance and the right of the individual to decide his/her personal destiny on the conduct of democratic values.

And the severely galling element of this discourse is the fact American leadership (elected and placed in a position of governance) is responsible for this shift in position from a posture (of at least moral superiority) to a pose of supine subjugation. It’s America’s progressive “leadership” initially presented in the actions of Theodore Roosevelt and Woodrow Wilson and nurtured through Franklin Roosevelt, Jimmy Carter and Bill Clinton until we’ve gotten to the present dimbulb-in-chief, that’s dropped respect for the United States to the level we see today.

At this moment, it’s 75 degrees in my office and steam is rising from my scalp I’m so super-heated on this issue. Beaurat Obama has abdicated the leadership of the free world and allowed Putin, a communist, oligarch, agent provocateur, to speak as representative of democratic ideals in this world. If the truth of the matter was authored in animation, Putin would be Mighty Mouse and Obama would be Goofy.

It’s absolutely absurd to be lectured concerning armed conflict with statements like: “Afghanistan is reeling, and no one can say what will happen after international forces withdraw. Libya is divided into tribes and clans. In Iraq the civil war continues, with dozens killed each day. In the United States, many draw an analogy between Iraq and Syria, and ask why their government would want to repeat recent mistakes”. This comes from a guy whose country initiated the interference in Afghanistan in the seventies.  This guy supplies weapons to middle-east belligerents while writing tongue in cheek Op-Ed pieces for a New York rag. That’s rich.

The concept of Russia lecturing ANYBODY on the ineffectiveness and pointlessness of force in geo-political operations is seriously funny. And I don’t mean “funny-ha-ha”. It’s (I’m running out of synonyms for ludicrous) almost unbelievable but for the fact Putin’s words are polluting my computer screen and stinging my mind as I recognize every word he’s saying should be said by Obama.

Putin is the new Superman on the block while Obama takes on the misshapen, Frankenstein’s monster parody, BIZARRO. Obama’s exhibiting a cobbled together inane representation of a polarity shifted representation of American ideals. Where we were represented as strong and resolute, BizzarrObama is ignorant, irresolute and gutless. Where our image was that of a humane and compassionate nation seeking moderation and justice, we’re now being told by John Kerry, Obama’s hand-puppet, we must launch a military action in Syria that he describes as “unbelievably small”.

Please explain to me how the explosive payload of a nuclear capable guided missile is describable as “unbelievably small”. It sure as heck ain’t small when you’re an innocent child caught at ground zero.

The fact is Putin has executed (arguably) the greatest coup-d’état in the history of modern civilization with one damned Op-Ed. He has effectively and efficiently shifted the global political polarities and displaced America as the champion of “truth, justice, and the American way.” And he’s got the incredibly testosterone charged temerity to advertise it, not only before the world, but in Beaurat Obama’s chosen allied venue the New York Times.

It’s really a shame when you think a shriveled, self-absorbed thug and petulant poseur can bring about the downfall of American ideals and displace her as the pre-eminent force for right and good on the planet.

We just have to decide which “shriveled, self-absorbed, thug and petulant poseur” did the dirty deed. Was it Putin or Obama?