I ain’t a big Lesticles fan.

I don’t call in those Jimmy Ott kinda shows to gripe about him, and I don’t go on rants like my uncle T-Bo does. You oughta hear that guy; he hasn’t stopped explodin’ about Miles since he lost that game to Tennessee back in 2005. It’s like the sun, only with sound insteada light.

But Miles kills me. He’s a daffy dude and his teams make all kinda inexplicable goofs. Mostly he wins anyway, and then he goes an’ loses to Ole Miss. Which ain’t acceptable.

Here’s the thing, though – they tell me LSU has won eight games or more for 14 straight years, nine of which are Miles’ teams doin’ it. An’ nobody else in college football has put up a number like that.

And as dopey as LSU plays, the worst it got for one of Miles’ teams playin’ one of those 1-AA/FCS rent-a-win type teams was a 16-point win over somebody called Towson last year.

Some uninspired stuff in there, fa sho. Nobody gets up to play teams they never heard of. But LSU was never in a position where anybody thought they’d be losin’ to one o’ the lil’ guys. Not when Les was the coach. He got his team to show up enough to keep that kinda disaster from happenin’.

Can’t say that for Will Muschamp from Florida, who used to be Nick Saban’s defensive coordinator at LSU before Les got here.

Muschamp got hisself beat 26-20. By Georgia Southern. Who is 7-4, and 4-4 in the Southern Conference with people like The Citadel and Furman and Appy State and Wofford and Elon and so on. They beat half those teams, but against Florida? They win without completin’ a single pass.

That’s right. Georgia Southern was 0-for-3 throwin’ passes. Instead, they ran the ball 54 times and got 429 yards. Which is 7.9 per carry. 7.9 yards a play would be a good number for throwin’ the ball. For runnin’ it against a Florida team with NFL draft picks on a defense and a head coach who’s supposed to be a defensive genius who studied his craft with Saban?

Florida’s gotta play Florida State this weekend. They’re gonna get kilt. And when they do, they’ll finish the season 4-8. As in, no bowl game – for Florida. The idea Florida doesn’t make a bowl game no matter how bad a season they have is kinda goofy, but that’s what you get.

Feel a lil’ better about Lesticles? I do.

I don’t think you can run him off anyway – for one thing, Miles would leave with pretty much all your money if you did, because it takes somethin’ like the gross domestic product of Kazakhstan or Botswana or somesuch to buy him out. And for another, the dude who right now would make the hire to replace Miles is that Joe Lacrosse goof from Duke, who as it turns out sided with a murderer-lady over his own coaches and athletes when the murderer-lady said she got raped by a buncha white dudes she ain’t never even met.

And Joe Lacrosse hired Trent Johnson the first time he had a shot at hirin’ somebody for a big coachin’ job at LSU. You hire up a Trent Johnson for LSU football, and it’s gonna look like this…

Sometimes it ain’t pretty when Les lays a stinker. But at least you get to go 9-3. 4-8 an’ your guys block each other when Georgia Southern comes to town and beats you – that’s what Trent Johnson as your football coach looks like.

Or, for that matter, Will Muschamp.

At least the newspaper guys can have fun with it. Here’s what the Jacksonville paper, which is used to comin’ up with snarky headlines after one o’ the local teams gets beat thanks to the Jaguars suckin’ golf balls through garden hoses for a good while, did on Sunday… 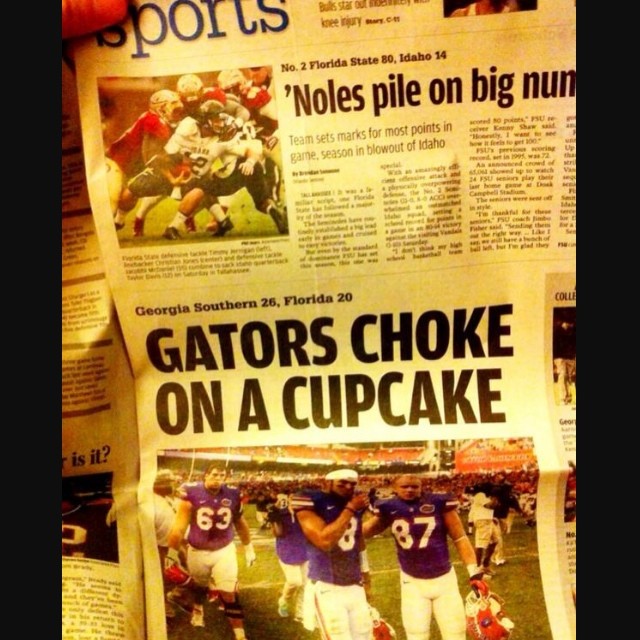 So are they gonna fire Muschamp? I dunno.

You’d think a coach at Florida who goes 4-8 and gets beat by a 1-AA/FCS rent-a-win team in his third year wouldn’t get a fourth year.

But here’s the thing. If you’re Florida, who do you replace him with? That’s a question.

The coach at Louisville, Charlie Strong, used to be an assistant at Florida. He’d be a no-brainer. But Strong makes more at Louisville than Muschamp makes at Florida. Louisville isn’t gonna turn that dude loose – and would Charlie Strong leave a situation where he’s gonna go into the ACC next year with a great program and a good shot at the playoffs yearly to take over a rebuild job at Florida?

Maybe, but what if he says no?

Ain’t a lot of awesome hires out there. The Briles guy at Baylor does pretty well, an’ he’d be a real good hire at a place like Florida where you can get a ton of skill guys who can play offense (funny how Muschamp can’t seem to sign any, which is why his team is so turrible). But the Briles guy at Baylor is gonna come pretty expensive. He already makes $4 mil a year thanks to a new deal they gave him two weeks ago, plus his buyout is a monster like Miles’ is – and next year he gets to play in a new stadium.

So he ain’t goin’ anywhere.

The guy Patterson at TCU is 4-7 right now just like Muschamp is, so that ain’t a great hire. The guy Peterson at Boise State is 7-4 in a league nobody is excited about. Those have been the two guys everybody has said were The Coach You Gotta Hire If You Can, and all the bloom’s off their roses.

Who else? Ruffin McNeill is winnin’ at East Carolina this year, and he used to coach for Mike Leach at Texas Tech. Except McNeil coached defense for Mike Leach, which wasn’t exactly what Texas Tech was good at. And even with bein’ 9-2 and probably winnin’ that league they play in this year, McNeill’s all of 28-21 as a head coach. And last year he lost to ULL in the New Orleans Bowl.

The guy who won the New Orleans Boal last year, Mark Hudspeth, is gonna get hired somewheres. And last year he played Florida and gave ’em all they wanted. Them Lafayette people, who say Hudspeth is the coach at UL – they’re confused, cuz Charlie Strong is the coach at UL – swear by the dude. But is he in the class of what Florida’s gonna need? You’d figure from ULL you go to somewheres like Mississippi State and THEN to Florida.

There’s a guy at Mississippi State who used to coach at Florida when Urban Meyer was there winnin’ big, of course. But Dan Mullen has to pull an upset of Ole Miss this weekend just to get bowl-eligible at 6-6. Mullen is hittin’ a ceiling at State right now and he’d love to get outta there. People at State say that Mullen’s inability to take that program to the next level is cuz Hudspeth, who used to be one of Mullen’s assistants, left to get the ULL gig.

Outside o’ that? I dunno. Hire somebody from the NFL, maybe. I can’t think of a big-name guy who’d be available. Or that Hugh Freeze guy, an’ hope he can buy recruits for Florida like they say he does at Ole Miss. Or maybe Kirby Smart, who’s Alabama’s defensive coordinator for Saban. Which is exactly the same job Muschamp used to have. It’d be like hirin’ Muschamp all over again and hopin’ it works out different this time.

Thing is, Florida might have to actually sit on Muschamp for another year hopin’ that he either turns it around or somebody they can get excited about surfaces as a replacement. The people out there you could hire at the moment don’t exactly blow your mind.

An’ incidentally, that’s a reason to cool it on Les, as nutty as he makes you. If Florida can’t find a decent coach an’ their AD is supposed to be one o’ the best in the bidness, it oughta scare the poop outta you to give Joe Lacrosse the reins for a hire with the current coachin’ crowd to pick from.

So I guess I like Les after all, even though I don’t like him. Is that what it means to be a fan? Hell if I know.

Interested in more national news? We've got you covered! See More National News
Previous Article AFTERBURNER: The Hammer Of Reality
Next Article Remy Raps ‘If You Like Your Plan You Can Keep It’