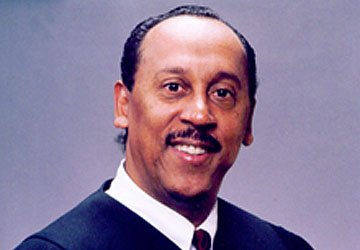 He already had one in Danatus King, the head of the local NAACP chapter, whose major gripe with the mayo was his lack of emphasis in steering city contracts and what’s left of the Katrina recovery dollars to minority-owned companies.

Judge Michael G. Bagneris, a judge in the city’s Civil District Court for the past 20 years, submitted his resignation from the bench on Wednesday evening and will officially become a candidate for Mayor of New Orleans today.

Bagneris, 63, was first elected to the bench on October 16, 1993.  He began his public service under Mayor Ernest N. “Dutch” Morial where he served as Executive Counsel to the Mayor.  Judge Bagneris began his legal career at the law firm of Fine and Waltzer, and rose to partner in the firm Fine, Waltzer and Bagneris.

The former judge delayed his qualifying to comply with Louisiana law and the Code of Judicial Conduct set forth by the Louisiana Supreme Court. According to LA RS 42:39, a judge who resigns from office to seek another office may do so, “provided … that the resignation of any such person shall be and is made not less than twenty-four hours prior to the date on which he qualifies as a candidate for nomination or election to the office to which he seeks nomination or election.” Bagneris’ resignation was accepted by the Secretary of State on Wednesday at the close of the business day.

Michael Bagneris is married to Madlyn Bridges Bagneris. They have four children: Charron, Calvin, Amanda and Elizabeth.  Bagneris is a Democrat. His current term as Judge of Civil District Court Division H would have expired on December 13, 2014.

Bagneris and King are both black, and Landrieu is white. All three are Democrats – and decidedly left-wing Democrats at that.

We’re told that King is highly likely to vacate the field now that Bagneris is in, because the judge is going to occupy pretty much the exact space King would have – and he’s going to have access to a lot more money than King would.

Between Bagneris and Landrieu, there isn’t a whole lot of ideological space. But that doesn’t mean this won’t be an interesting race.

It’s inevitable that race will be a huge factor in the campaign. Ray Nagin, fresh off his pathetic performance the year before when Katrina hit New Orleans, managed to hold off Landrieu by playing the “chocolate city” card and won re-election in sizable part thanks to racial concerns. Bagneris is known as an ally of the Morial machine in New Orleans, so much so that he twice attempted, as Ernest Morial’s executive counsel, to get the city’s charter changed so that the Morial paterfamilias could run for a third term.

There’s always been friction between the Landrieu machine and the Morial machine, though they’ve managed to work together when necessary. But Bagneris and Mitch Landrieu don’t get along, and one of the flashpoints of their conflict has been Landrieu’s moves to consolidate a big chunk of the city’s offices, including the courts, in the old Charity Hospital building.

Today, Bagneris said that had nothing to do with him running for mayor.

Asked whether his frustration over Landrieu’s plan for Charity pushed him to run, Bagneris said: “Zip. Zero. Nada.”

“I wish I could think of a better word than ‘stupid,'” he said. “I’m going to leave a judgeship where I believe the people allow me to serve as long as I like, I’m going to leave the judgeship for what reason? For a courthouse that I wouldn’t be able to serve in? I mean, what sense does that make?”

Landrieu has also accumulated a significant campaign account to the tune of almost $2 million. Bagneris said he wasn’t concerned about it.

“Everybody talks about the money,” he said. “And I realize the old adage about money being the mother’s milk of politics. I understand that. I have something better than money. I have faith, I have friends, I have family and I have the confidence in this city that the people are going to do the right thing.”

He seemed aware he will have to counter the narrative that Landrieu has been hammering on for the better part of a year: that New Orleans under the incumbent’s leadership is bouncing back not just from Hurricane Katrina, but from a decades-long decline that saw its population drop, its public schools crumble and violent crime explode.

Landrieu in particular has been pointing to a sharp drop this year in the number of murders in New Orleans, long the country’s “murder capital,” but Bagneris said he doesn’t see crime on the decline at all. “Ask the average guy on the street if he believes the murder rate is down,” he said.

And the mayor’s NOLA for Life anti-murder initiative? Here the judge’s campaign manager, Greg Buisson, cut in with a reference to the advertisements Landrieu commissioned from director Spike Lee: “You mean solving crime with the billboards?”

And a dark-horse issue – taxicabs. Landrieu’s “reforms” of the New Orleans taxi industry set the tax drivers in the city ablaze with anger, and the president of the taxi drivers’ union appeared with Bagneris at his campaign announcement today. There are allegations the “reform” package benefited some in that industry who have the right connections and are less-than-savory elements, and those “reforms” absolutely do not benefit individual cab owners and small businesses. Of late, Landrieu’s efforts to keep the web-based limousine service Uber, which is gaining traction in many other cities, from operating in New Orleans have caused an uproar.

Given that this isn’t a Republican-vs.-Democrat campaign, and given that even though it might be about race one still needs issues with which to wrap race around in a campaign, Bagneris might end up running on taxi freedom. And given the public’s dissatisfaction with cabs in New Orleans, it might even work for him.

Interested in more news from Louisiana? We've got you covered! See More Louisiana News
Previous Article WAGUESPACK: Every Second Counts
Next Article SADOW: There Are More Pressing Issues Than I-49 South