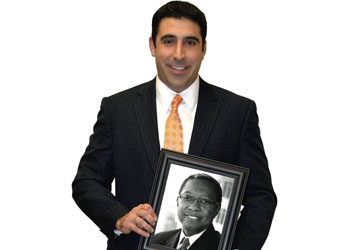 The messaging wars over the St. George incorporation have begun in earnest, with the opponents of the new city’s incorporation forming organizations to fight it and selecting, it seems, a politician to rally behind in the person of Metro Councilman John Delgado.

Delgado is a Republican who, when being profiled as a Baton Rouge Business Report “40 Under 40” honoree, had this to say…

His latest outpouring of “perseverance” involves threatening to sue the organizers of the new city if it incorporates.

“I personally have standing in my official capacity to sue, and will in fact sue, to stop it from happening,” Delgado said. “I believe that the incorporation of the city of St. George as proposed would have a serious detrimental impact on the citizens of both Baton Rouge and the (future) incorporated area, and I will do everything in my power to hold this parish together even if I have to do it with my bare hands.”

Delgado’s mentor isn’t making a public show of opposition to St. George, though his stance wouldn’t be any less obvious if he was out front in trying to stop it rather than delegating the task to his minions.

There is a statute in Louisiana law, RS 33:4, which provides for the contestation of a new city’s incorporation. That statute does give Delgado, along with several other classes of interested parties, standing to contest a new city and sets up standards by which that contestation might succeed.

But unless he gets a VERY friendly judge or the St. George folks get away with doing a terrible job in circulating their petition, the chances of Delgado’s lawsuit amounting to more than a nuisance aren’t the best. Fom the statute…

E.(1)  If the district court determines that the provisions of this Subpart have been complied with, that the municipality has the capacity to provide the proposed public services within a reasonable period of time, and that the incorporation is reasonable, the district court shall enter an order declaring the date the municipality shall become incorporated.  The order shall set forth the name and the boundaries of the municipality.  Unless this order is vacated by a timely suspensive appeal, a copy of the order shall be filed in the office of the secretary of state.

(b)  Unless the order is vacated by timely appeal, no petition for the incorporation of all or part of the area proposed for incorporation under this Subpart shall be circulated for two years from the date of the order of the district court.

Delgado says an “adverse effect” on the city-parish government would prevent the St. George incorporation. But in reading the statute, all it provides for is a court’s consideration of those effects. Therefore, a judge will have rather wide latitude to look at those effects.

Meaning that when Delgado and his friends downtown use their figure of an annual $53 million in budgetary losses from a St. George incorporation, a judge will get to ask why it is that $53 million in tax receipts from people outside the incorporated area of Baton Rouge are being re-routed into the city – and whether THAT is reasonable.

It’s not a very good case he’ll have to make, and threatening a lawsuit based on “adverse effect” when such a showing is only one consideration for a judge to weigh and the odds are against him smells a whole lot like grandstanding.

Meantime, the St. George people have put together a video answering one question being asked of them. Namely, “why do you want to incorporate a city?”

Why a City? Part 1 from St. George, Louisiana on Vimeo.

The answer being because the Baton Rouge area legislators who blocked the creation of the Southeast Baton Rouge independent school district earlier this year admonished them that if they want an ISD they’d have to have a city. So now they’re going to incorporate a city, and those same legislators are going to scream about it.

It’s not boring. We’ll give it that.

UPDATE: Another front in the brewing legal battle over the St. George incorporation is that supposedly the East Baton Rouge Plan of Government prohibits new cities from incorporating, but that’s not a great argument since it would make the Plan of Government unconstitutional under Louisiana law. So says Woody Jenkins, who passed this along earlier today…

LOUISIANA CONSTITUTION SUPERSEDES EBR PLAN OF GOVERNMENT ON INCORPORATION. Opponents of incorporating the proposed City of St. George are now saying that the City-Parish Plan of Government prohibits the incorporation of any new municipalities in East Baton Rouge Parish. That is true, but that provision in the Plan of Government is unconstitutional in light of Article VI, §8 of the Louisiana Constitution of 1974, which says,

General law in Louisiana provides a method for incorporation of municipalities, and EBR cannot obviate that law. Article VI, §8 of the Constitution was written with EBR in mind. When the Constitutional Convention of 1973 was in session, the people in Scotlandville were considering incorporating, but the EBR Plan of Government prohibited it. Black delegates to the convention fought hard for passage of Article VI, §8, which invalidated that provision of the Plan of Government.

Interested in more news from Louisiana? We've got you covered! See More Louisiana News
Previous Article WAGUESPACK: Time For A Rankings Reality Check
Next Article SADOW: The Legislative Auditor Needs To Stay A Referee, Not A Player