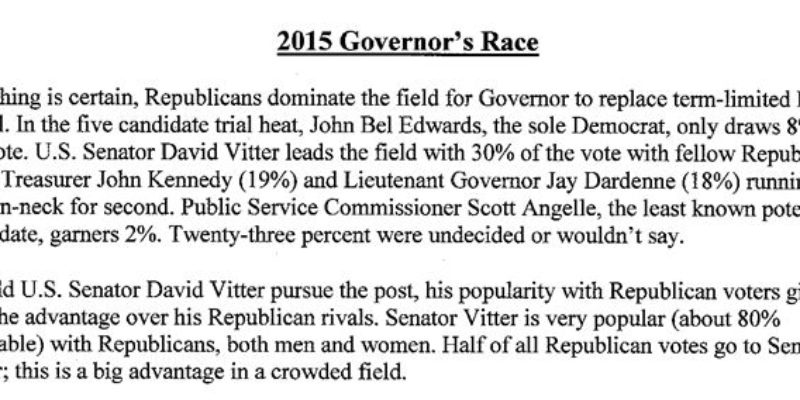 After months of dodging the talk, U.S. Sen. David Vitter says he’s weighing whether he’ll run to be Louisiana’s next governor, with plans to decide by January.

Vitter tells The Associated Press that he is sending an email to supporters Wednesday, announcing that he and his wife are considering the race for the 2015 election.

The Republican senator said he expects to have a decision after the holidays. Of the governor’s race, Vitter said, “This is the logical time to do it, if I’m ever going to do it.”

If Vitter decides to make a bid for the position, he’d be a formidable candidate. His Louisiana approval ratings are high. Other possible GOP contenders have been waiting for Vitter’s decision to determine if they’ll run.

One reason why the Senator could be making such public noises about a gubernatorial run is Bernie Pinsonat’s poll from a couple of weeks ago – the one which had Mary Landrieu at just 41 percent against Bill Cassidy and Rob Maness. The SMOR poll release had this to say about Vitter…

The guess is that Vitter would keep Kennedy out of the race, since they’ve conducted a political alliance of sorts (if only of convenience).