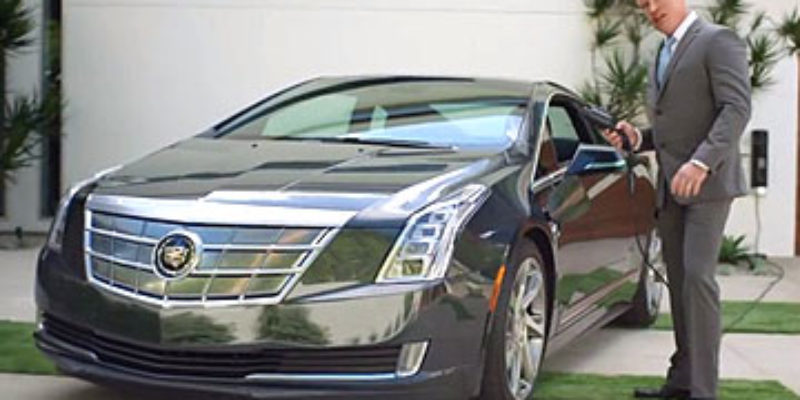 It looks like the crowd at Government Motors has begun to wake up.

The new commercial spot for Cadillac’s ELR Coupe, which is an electric car (actually it’s a hybrid)…

Why do we like this ad? For a couple of reasons. First, it’s an appeal to not just America, but American work ethic and productivity. And swagger.

Cadillac is a brand built on swagger. That attitude goes back half a century, but given that the primary market segments Cadillac has done well with in recent years are (1) rich old white people from the country club and (2) ghetto superstars, swagger works fine. They’re selling the attitude of “you work harder and you’re worth more than the losers who criticize you from a position of weakness, so buy a Caddy and shove it down their throats.”

We don’t have quite enough swagger in this country in 2014, and we definitely don’t have enough of it in the auto market. Which brings us to the second reason.

Which is that this ad is the first time anybody has marketed an electric car on any basis other than how wonderful it is for the environment. Go watch the Chevy Volt ads or Prius ads or Nissan Leaf ads; they’re nauseating, and cynical. They shamelessly market crappy cars to suckers on the basis that driving this overpriced, government-subsidized clown car will save the planet, when any rigorous examination of that claim will show how idiotic it is.

Cadillac is marketing this car as a Cadillac, with everything that entails. Nothing is even said about the fact it’s an electric car; you only know it is by noticing that he’s got it plugged in.

They’re selling this car, which costs $76,000, as Cadillac’s top-of-the-line machine. That it’s a hybrid is nice, and all, but the reason there aren’t that many hybrids out there is the market for hybrids isn’t all that big. There just aren’t that many enviro-suckers out there to buy cars, much less $76,000 cars, and people who aren’t in that market mostly reject a hybrid car outright out of a sense of cultural identity.

And they cast Neil McDonough as the protagonist in the ad. He’s a terrific choice – if he looks familiar, it’s because he’s been in a bunch of movies and TV shows, perhaps most notably as Buck Compton in Band of Brothers. McDonough just oozes “white dude with swagger” in the ad, which gives off just enough attitude that it will infuriate the more obnoxious Prius weenies everybody else on the road hates so much.

Naturally, the enviro-sucker crowd hates this commercial like poison, which is exactly what Cadillac is hoping for.