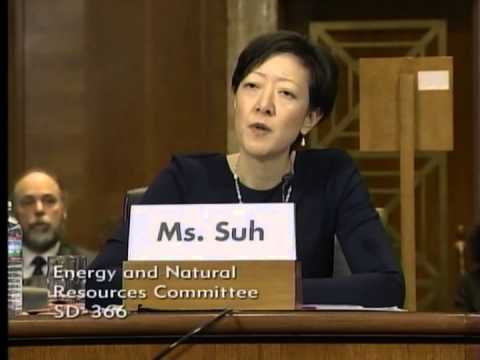 UPDATE: We figured this was as good a place as any to include the late-breaking development that Rhea Suh was just endorsed for the new job she’s up for…by Sen. Mary Landrieu.

So much for Landrieu’s pro-oil and gas bona fides.

A release by the Louisiana GOP from this afternoon…

Today, Sen. Mary Landrieu announced that she will support Rhea Suh’s nomination to be assistant Interior secretary for fish and wildlife and parks when the Energy and Natural Resources Committee votes on the matter.

“I will be supporting her, yes,” Landrieu told reporters today, according to Politico Pro.

Louisiana’s Republican congressional delegation has opposed Suh’s nomination due to her anti-energy record.

“My Republican colleagues expressed a view I don’t share a lot of,” Landrieu said.

“During her time in the Department of the Interior, Ms. Suh advocated against natural gas exploration and helped implement the drilling moratorium following the 2010 Gulf oil spill. The decision to nominate Ms. Suh as the next Assistant Secretary of Fish, Wildlife and Parks puts the President at odds with our energy workers and producers. Our Senators need to support Louisiana working families over the President,” Congressman Bill Cassidy said.

Congressman Steve Scalise said, “Ms. Suh’s track record of hostility towards American energy security should concern each and every Louisianan. I hope our Senators recognize the potentially devastating consequences that could come by confirming an anti-energy extremist as Assistant Secretary for Fish, Wildlife and Parks at the Department of Interior.”

“Once again, Senator Landrieu has put politics above what is best for the people of Louisiana,” LAGOP Chairman Roger Villere said. “Ms. Suh has repeatedly been hostile toward Louisiana’s energy economy and nominating her to this position will drive a further wedge between Washington’s anti-energy agenda and Louisiana’s hard working families.”

UPDATE #2: Another release, this one from Bill Cassidy’s office with a headline of “Mary Landrieu Fumbles First Test As Energy Chair”…

Senator Mary Landrieu, who is set to be Chair of the U.S. Senate Energy and Natural Resources Committee, today announced her support for Rhea Suh’s nomination to be the Assistant Secretary of Fish, Wildlife and Parks within the U.S. Department of the Interior.

Rhea Suh has a long record of advocating against America’s energy economy. This nomination is especially concerning for Louisiana as Ms. Suh played a key role in the moratorium on drilling in the Gulf, which hurt Louisiana workers. As Assistant Secretary Suh could “have the power to block natural gas recovery and eradicate resource production on vast swaths of America’s federal lands, the coastal continental shelf, and astonishing amounts of private property.”

“Senator Landrieu had an opportunity to stand up to President Obama and stop Rhea Suh’s nomination. Senator Landrieu claimed she was indispensable to Louisiana; but the day after she announced her chairmanship she failed her first test by signing off on one of President Obama’s most anti-energy nominees. This nomination will hurt Louisiana’s economy and make it harder for people to find good paying energy jobs. It turns out that Senator Landrieu isn’t willing to stop supporting President Obama 97% of the time, even when that means hurting her state’s economy.” U.S. Representative Bill Cassidy M.D.

Rhea Suh may be showing up on Louisianans’ news feeds recently, and if she’s not – she should be.  Suh, currently Assistant Secretary for policy, management, and budget at the Department of Interior (DOI) since 2009, is an Obama nominee for Assistant Secretary overseeing the National Park Service and the U.S. Fish and Wildlife Service at DOI.

Suh’s approval to this post could mean a new anti-energy official in a place of influence over Louisiana oil and gas growth and infrastructure.  The most memorable, to Louisianans, anti-energy nominee and eventual Secretary of DOI was Ken Salazar who during his tenure placed an offshore drilling moratorium on the Gulf Coast.  Suh herself stated in a Senate Energy and Public Works hearing that she worked to “[implement] ‘every single one of the major policy priorities from Secretary Salazar to now Secretary Jewell.’” This moratorium Suh and Salazar effectively implemented cost Louisiana billions of dollars and thousands of jobs, according to Louisiana State University Institute of Energy Research.

Suh’s past is riddled with anti-energy credentials leaving many wary of her plans if confirmed.  In 2007, Suh said “natural gas development is ‘easily the single greatest threat to the ecological integrity of the West.’”  Suh also had stints with the David and Lucile Packard Foundation, and the William and Flora Hewlett Foundation where she distributed hundreds of thousands of dollars to “groups who sued the government to block productive ventures and usurp private property rights at the federal, state and local levels from the Dakotas to Texas to the Pacific.”

During confirmation hearings in December, Senator John Barrasso (R-WY) asked Suh, “Given your lifetime of funding activist groups opposing natural gas production, how can the members of this committee suddenly expect you to change your views if you’re confirmed?”  Sen. Barrasso is not the only legislator nervous about the damage Suh could inflict on domestic energy production and exploration.  Senator David Vitter (R-LA) who questioned Suh himself at confirmation hearings sent follow up letters requesting further information about Suh’s work while at Interior.  As of two weeks ago, his request was still pending.

Tuesday, members of the Louisiana Congressional delegation sent a letter to Sens. Vitter and Landrieu urging them not to confirm Suh.  Rep. Bill Cassidy (LA-06) said in the letter: “During her time in the Department of the Interior, Ms. Suh advocated against natural gas exploration and helped implement the drilling moratorium following the 2010 Gulf oil spill.  The decision to nominate Ms. Suh as the next Assistant Secretary of Fish, Wildlife and Parks puts the President at odds with our energy workers and producers.”  Rep. Steve Scalise added: “Ms. Suh’s track record of hostility towards American energy security should concern each and every Louisianan.”

Sen. Vitter was quick to respond to the letter voicing his opposition to Suh’s nomination and confirmation, and urging other members of the Senate to join him in opposition.  Sen. Landrieu, who has been tapped as the new Chair of the Energy and Natural Resources Committee, will not take up her new post until Thursday – meaning she will conveniently miss presiding over Suh’s confirmation vote.

Suh has fallen under expected and deserved scrutiny and should be raising eyebrows among all true friends of Louisiana oil and gas.