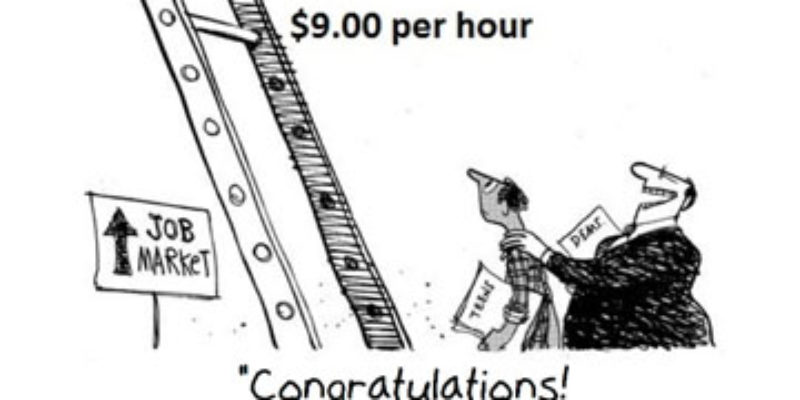 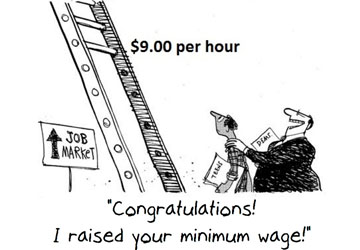 One of the issues we’re going to see a huge amount of discussion about in this legislative session is the frontal assault offered up by the Louisiana Democrat Party on the issue of the minimum wage. Mirroring the effort of the national party in Washington, four separate bills attempting to mandate a state minimum wage in Louisiana are making their way into legislative committees.

The four bills are:

Before getting to the philosophical and practical analysis of these bills – does it not strike anyone as insane that these people would mandate as much as a 40 percent increase in unskilled labor costs on business?

Of course, studies have been done nationally on this question, and some 38 percent of business owners say that they’ll be reducing employment if a $10.10 minimum wage is instituted…

A new study has found that 38 percent of employers will lay workers off if the minimum wage is increased as President Barack Obama has proposed.

Express Employment Professionals, the nation’s largest privately held staffing firm, surveyed 1,213 business owners and human resourcesprofessionals nationwide asking them if they would be impacted if the minimum wage was increased.

“There’s been a lot of debate and speculation about the impact of a minimum wage increase on job creation,” Bob Funk, CEO of Express, and a former chairman of the Federal Reserve Bank of Kansas City said in a press release. “At Express, we decided to go directly to the employers who make those decisions to find out what a minimum wage increase to $10.10 would mean for them specifically and for the economy in general.”

Nearly 213 of those surveyed pay their employees the current $7.25 minimum wage.

In Louisiana, where there are more unskilled workers affected by minimum wage increases, it’s entirely likely that the 38 percent figure could be worse.

LABI’s position paper on the subject notes that Alabama, Mississippi and Texas don’t have a minimum wage law. So companies which employ unskilled workers at the minimum wage in Louisiana who can move out of the state to just across the border will have incentive to do so – they’d save on labor costs.

So the question to Hunter, James, Dixon, Nevers, Dorsey-Colomb and Brossett, who represent districts with lots of unskilled workers who might not be able to get jobs at $10 an hour and could well lose the $7.25 an hour jobs they have if the politicians get what they want, is whether they’d be comfortable telling those constituents they’re responsible for chasing those jobs away.

Or do the Dems just blame it on the greedy business owners?

We’ve talked about this before, but the vast majority of people who earn minimum wage only do so for a short time. If you work a minimum wage job for a year, you’re almost certain to get a raise – or if not, you’re going to have enough of a resume that you can get a job making more than minimum wage somewhere else. Employers, particularly in a place like Louisiana where the unemployment rate checks in at 4.9 percent right now, will bid up the price of labor for people who can show themselves capable of holding down a job for a year.

Furthermore, because upward mobility is a fact – albeit less demonstrable in the Obama economy wherein the cost to employ people thanks to government policy is at a high point – the most important thing government can or should do in the employment venue is to encourage people to join the workforce. If public policy can encourage employment, at any price, people can catch onto a rung on the economic ladder by getting a job and beginning to climb. Barriers to market entry like a minimum wage do damage to that process.

Also, let’s remember that the minimum wage jobs we’re talking about reflect UNSKILLED labor. That is, those jobs require as little value added to the employer as you can get. More often than not, getting paid minimum wage means your employer is actually doing you a favor by giving you that job; if you demonstrate the basic job skills like showing up to work on time consistently, not coming to work drunk or high, not having a lousy attitude on the job, demonstrating that you can follow orders without screwing up and so on, then you’ve learned how to be a good employee. Marry that with a skill that many minimum wage workers are attempting to acquire on the side whether through school or whatever other means, and you begin to have a future in the workforce.

An addition to that point – very few minimum wage workers head households. Minimum wage workers are usually kids who are getting pocket money, or more to the point they’re often college students who are trying to work their way through school. Increase the minimum wage and you make it harder for kids to work their way through school. Great job, that – let’s have fewer kids who can afford to go to college, meaning our public colleges will get less tuition money and put a larger strain on the state budget for their operations or better yet, we’ll have more of our college students taking on a larger debt burden in order to make it through school. That leads to a higher dropout rate and a less-skilled workforce, and it also leads to a less-educated population with less economic upside.

By all means, let’s jack up the minimum wage by 40 percent and mandate that as many as 360,000 people cost their employees more money (if you believe the Louisiana Budget Project’s numbers, which you probably shouldn’t). They’re running around with the claim that 73 percent of the people of Louisiana are in favor of minimum wage increases, though the poll question suggests an increase only to $8.50 an hour, which isn’t encompassed by any of the bills, and little is said about the methodology of that poll.

The ridiculous thing about these bills is their timing. Louisiana’s unemployment rate being what it is, the demand for employees should drive wages upward as the state’s economy grows, and therefore fewer and fewer of these mythical people who struggle to raise a family on a minimum wage job would mythically struggle. You don’t need the government to mandate that process; get the government out of the way and the economy will do that naturally.

But the authors of these dumb bills know they can’t pass them through a Republican legislature and that our Republican governor would veto them even if they did. They don’t care about economics or how many jobs their constituents can get; what they want is a good issue they can pander to their base with, and since there are national left-wing organizations willing to come in and do rabble-rousing on this issue they can raise some awareness and campaign cash with it.

And it might even work, because the business community and the conservative establishment in the state (and the country, for that matter) has done a suspect job of communicating on the issue. The legislators get it, and the bill won’t pass this year. But since the Democrats badly need an issue they can hang their hats on and they’ve got that poll they think says the minimum wage is a winner, get ready for a whole year of “Republicans hate poor people and won’t raise the minimum wage” demagoguery.