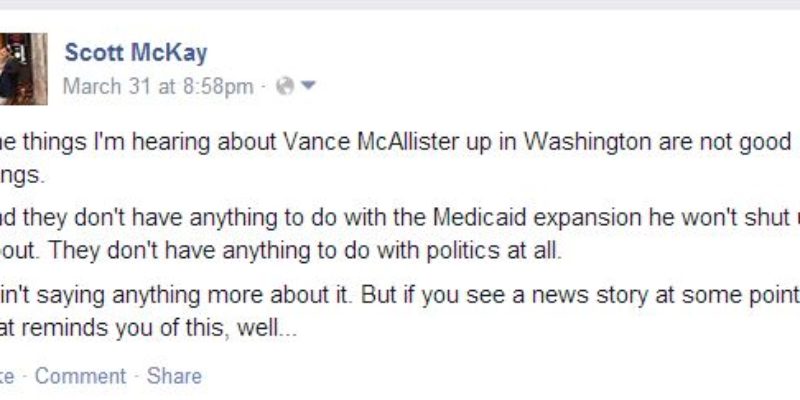 “There’s no doubt I’ve fallen short and I’m asking for forgiveness. I’m asking for forgiveness from God, my wife, my kids, my staff, and my constituents who elected me to serve,” he said in a statement issued from his office. “Trust is something I know has to be earned whether you’re a husband, a father, or a congressman. I promise to do everything I can to earn back the trust of everyone I’ve disappointed.”

He said he  was “very sorry” and did not want to make a political statement about the video’s release.

“From day one, I’ve always tried to be an honest man,” he said. “I ran for Congress to make a difference and not to just be another politician. I don’t want to make a political statement on this, I would just simply like to say that I’m very sorry for what I’ve done. While I realize I serve the public, I would appreciate the privacy given to my children as we get through this.”

ORIGINAL: MacAoidh called this one on Facebook a solid week ago…

The deal is, two weeks ago the Heritage Foundation had their big annual confab for policy wonks and blogger-types like MacAoidh, and it was in New Orleans so he actually left his crib and went to it. And he came back sayin’ that the rumor in DC was that McAllister was a lot more fun than anybody else in Congress – at least since they emptied all the Kennedys outta there.

But he said it was just a rumor, so we weren’t gonna go do Hayride stuff about it. Which I was cheesed off about, because politicians who act da fool are like mama’s milk to the stuff I do on here.

Fifth District Congressman Vance McAllister, who campaigned for office last fall as a devout Christian and devoted husband and father, was caught in video surveillance two days before Christmas passionately embracing and kissing one of his congressional aides.

The Ouachita Citizen obtained the video recording from an anonymous source. The video can be seen atwww.ouachitacitizen.com.

The woman who McAllister, 40, was caught kissing for almost half a minute is Melissa Anne Hixon Peacock, 33, of 400 Zachary Way, Sterlington. She is McAllister’s district scheduler.

McAllister did not respond to calls to comment. His chief of staff, Adam Terry, said he would respond by noon Monday. The Ouachita Citizen did not receive a statement from McAllister or Terry.

Peacock was contacted by The Ouachita Citizen as well. She did not answer her cell phone.

You can see the video at the link. For some reason we can’t embed it. It doesn’t zactly look like this…

UPDATE: The computer geeks at the Daily Caller got hold of it and put it up…

Not only is Vance’s scheduler with whom he’s havin’ that touching and passionate moment not Mrs. McAllister, she’s got a hubby of her own. And it turns out Vance worked with the guy for like a decade.

So that ain’t good.

And there’s more, obviously, since Vance made a big deal about how he’s a big Christian an’ all. By now, it oughta be a pretty standard deal that if you’re gonna run around on the Missus you prolly oughta leave the bible-beatin’ alone unless you lay on pretty thick about how you’re a sinner just like everybody else, on account of the fact that the Left only cares about hypocrisy and not any actual immoral behavior somebody might be doin’.

Which means Vance is prolly done. Particularly given that what MacAoidh was sayin’ was that the Vance rumors were comin’ outta DC and not The Most Fun Congressional District Office In These U-Nited States. And now that the national boys have a hold of this thing, they’re gonna start diggin’ up whatever dirt they can on this dude – and if the rumors about how he’s fun-lovin’ up there are true, you can bet they’ll have Vanceplosions all the time until he’s done (which’ll be soon if the rumors are true).

His office ain’t put out a press release yet. Curly Bill Brosius just did, though.

OH, BY THE WAY: this post brought to y’all by this guy… 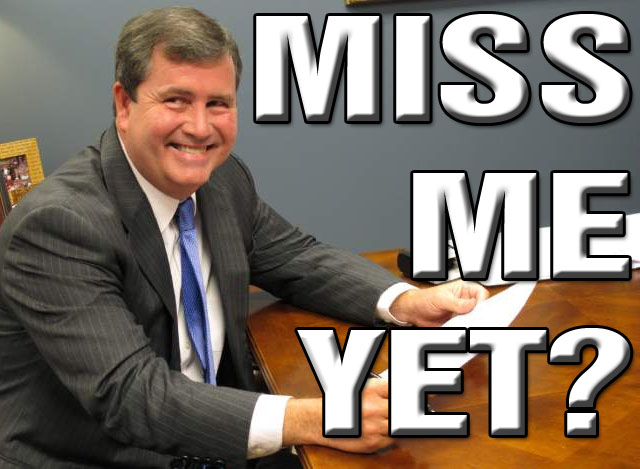