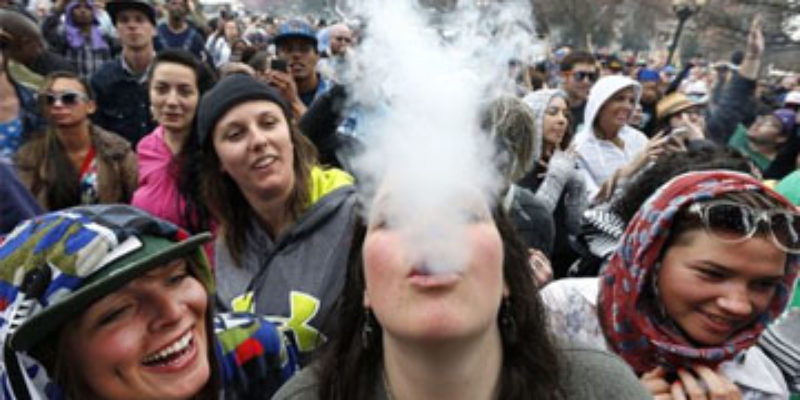 On Easter Sunday, which this year happened to fall on April 20, there was a big annual celebration in Denver in which pot smokers congregated to get high in a public place.

This is an annual event, despite the fact this year was the first year that it was legal to do so in Colorado.

Hannity sent someone to cover it, and captured the essence of 420…

What do you see in that video? Probably some nice folks, right?

How about LOSERS? How about people who have no future, no ambition, no plans, no constructive achievement. All they want to do is to get high, and they delude themselves into thinking that marijuana is going to be a “billion-dollar industry” that somehow will rev up Colorado’s economy.

They might actually be right, but actor Kevin Sorbo, the star of the new flick God’s Not Dead, has this exactly right on his Facebook…

Hey, Colorado! Pot smoking Colorado. I honestly don’t care about what anyone does in their private lives, but your pot day looked pretty silly to me. I like wine, but I don’t carry a bottle around in public giggling and proudly displaying my one glass a week I drink for the world to see like a stupid teenager, as I once was. All this coverage does is reinforce the stereotype that most non pot smokers have of pot smokers……I think you all know what those are. And using pictures of Jesus smoking pot? Really. How cowardly. You did it because you know Christians won’t do anything to you. Why don’t you do it of Muhammad smoking pot?? And I think we all know the answer to that one as well. You guys look so cool.

Putting dope-smokers in jail, as we’re currently doing, probably isn’t smart policy. But let’s not kid ourselves. Anybody who has seen what weed does to the people who make a habit of abusing it knows that marijuana destroys ambition, it retards intellect and it reduces its victims to the status of losers and assclowns.

You can’t have a great country when that’s your cultural mainstream. You’re going to have Jamaica.

If Colorado wants to be Jamaica, fine. Let’s just not have that be the fate of the rest of our neighborhoods.