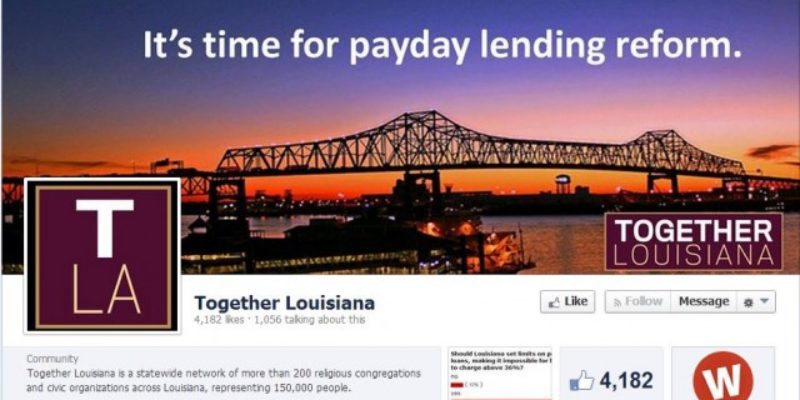 Here’s somethin’ fun for y’all to do. Go to your Facebook an’ type in “Together Louisiana” in that search bar deal at the top. An’ then click on ’em.

You don’t think that’s fun? Fine. I’ll do it for you. Here’s what it looks like… 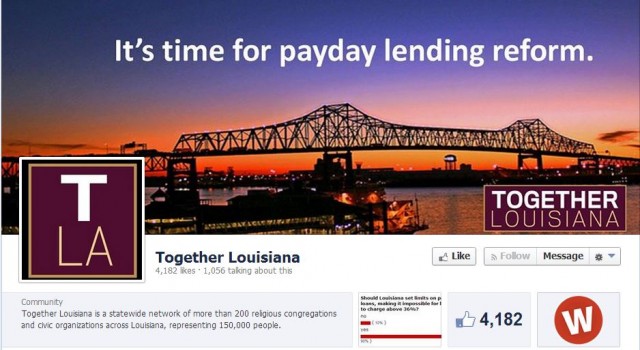 Y’all know that Together Louisiana is the Bayou State front group for the Industrial Areas Foundation, right?

Yep. You won’t find that fact at Together Baton Rouge’s website (Together Louisiana hasn’t got around to that project yet; maybe they can’t get a loan to finance it, but it’s the same people) anymore, though you used to be able to find it before MacAoidh pointed that out a while back. But yeah – they’re IAF. And IAF was founded by that dude Alinsky who dedicated his Rules For Radicals book to Lucifer.

So Together Louisiana, which is IAF, which is Alinsky who dedicates books to Lucifer, says it’s a buncha churches who got together.

And now they’re all over the payday lendin’ stuff. And got ol’ Jim Beam and the Pic-ya-nose, not to mention the USA Today farm team up in Shrevesport to write up editorials about how turrible the payday lender people are and how they need that re-form.

There’s somebody else involved in all this.

Well, here’s who The Center For Responsible Lending was founded by: Herb and Marion Sandler.

Y’know who Herb and Marion Sandler are? Maybe you remember ’em from Saturday Night Live.

Oh, wait – I can’t show y’all the “People Who Should Be Shot” SNL skit about the Sandlers, because they screamed bloody murder about how SNL beat them up for runnin’ up billions of dollars of bad paper in the subprime mortgage industry and then unloaded all of it on Wachovia just before the whole industry went kablooey, and got SNL to pull that clip off the internet.

Marion Sandler’s pushin’ up daisies right now. Herb’s still around. And so is the Center For Responsible Lending. Responsible lending like even more subprime mortgages. Oh, and going after the payday loan people. They have a lotta money to shower on folks who’ll help ’em, thanks in part to a $15 million check they got a few years back from a cat name of John Paulson, who ran a hedge fund that bet big against the subprime market and made like $15 billion when the housing crisis blew up the banks. Oh – and all the same Sorosian (Can we use that word? You know what that means, right?) foundations who fund the Together Louisiana/IAF/Together Baton Rouge crowd.

You followin’ all this so far? Here we have this national lefty pressure group, which is bankrolled by the bankster-types who everybody is scratchin’ their heads tryin’ to understand why they’re not in jail, which is screamin’ about how banks should be loanin’ even more money to people who can’t afford to pay it back – and that’s who’s marchin’ at the front of this Kill The Payday Loan Parade.

What happens in a payday loan? Well, when it’s the 25th of the month, say, and your light bill is due but your check for the light bill’s gonna bounce because your bank account’s got like $40 in it and the light bill is $150, you go to the payday loan place and you borrow $200 and they charge you $40. And when your paycheck comes in on the 1st, you pay back the $240 – and your lights didn’t get turned off and you didn’t get charged $35 in NSF fees.

Is that a profile in great financial management? Well, no. Does it make sense to have done it under the circumstances? Well, yeah.

I can say, without ever havin’ used ’em, that the payday loan places provide a valuable service to broke people, in Louisiana and a buncha other places.

You know why I can say that? Because they have CUSTOMERS. You wouldn’t use these guys, and you especially wouldn’t use ’em more than once, if you didn’t get some value outta usin’ ’em.

And if you had a better idea than payin’ these guys to get some short-term money, you’d go bug your uncle for a few hunnert.

But that’s not good enough for the Together Louisiana/IAF/Herb Sandler/Goofball Axis. They ain’t interested in you bein’ able to use these awful payday loan people to make you a loan when you’re busted. So they’re bringin’ bills at the legislature that would make it so the highest APR anybody could charge on a loan is 36 percent or so.

Right now, the most you could take out on a payday loan is $350, and the most they can charge on that loan is $55. But when you take out a payday loan and then you can’t pay it, which is not the payday loan dude’s fault but yours, see, it can end up costin’ you a lot more than just that 20 cents on the dollar.

Because you ain’t good with money, see, and you ain’t gettin’ a loan from anybody but the payday loan people. To include your uncle, who by this point you’ve already stiffed on a check.

And if they pass this bill and all they could ever charge is 36 cents on the dollar to loan money to your broke ass, what happens?

In other words, they’d basically have to make you a loan for the better part of a year to charge that 20 cents on the dollar, instead of two weeks. A 36 percent APR on two weeks, or two-52nds of a year, comes out to 1.38 percent – which is what the Advance America guy is saying.

You think the bank will pop you a loan at 1.38 percent over the duration with no credit check and no collateral? Yeah, right. That’s a good one, huh?

The Coalition Of The Brokedicks that Together Louisiana and Herb Subprime Sandler have put together are gonna try to wipe out that industry – which has like 6,000 employees in Louisiana. On Friday, it came out we had a 4.5 percent unemployment rate in Louisiana, though, so I guess it’s cool to wipe out a whole industry that people actually voluntarily do business with.

So what happens to the people who stink with money and need $200 to pay the light bill with?

They can’t go to the bank. The bank doesn’t write $200 loans. If they could go see Uncle about that money they wouldn’t go to the payday loan people in the first place.

But apparently they can go see the local loan shark. Because, see, the loan shark, he don’t care what the law against loansharking says about a 36 percent APR. He also don’t care too much about the idea that you can’t harrass debtors, charge ’em extra on the vig or, y’know, rearrange-a you face.

So this is the anti-loansharking bill that makes for more business for loansharks.

So we don’t have anybody to do short-term lending anymore, if this passes. Makes for a big hole in the market – and only so much of that can get filled by La Cosa Nostra or the local drug dealer down the street. How do these people think we can fix that?

The Postal Service (USPS) could spare the most economically vulnerable Americans from dealing with predatory financial companies under a proposal endorsed over the weekend by Sen. Elizabeth Warren (D-MA).

“USPS could partner with banks to make a critical difference for millions of Americans who don’t have basic banking services because there are almost no banks or bank branches in their neighborhoods,” Warren wrote in a Huffington Post op-ed on Saturday. The op-ed picked up on a report from the USPS’s Inspector General that proposed using the agency’s extensive physical infrastructure to extend basics like debit cards and small-dollar loans to the same communities that the banking industry has generally ignored. The report found that 68 million Americans don’t have bank accounts and spent $89 billion in 2012 on interest and fees for the kinds of basic financial services that USPS could begin offering. The average un-banked household spent more than $2,400, or about 10 percent of its income, just to access its own money through things like check cashing and payday lending stores. USPS would generate savings for those families and revenue for itself by stepping in to replace those non-bank financial services companies.

Got that? We’re gonna take a business which has enough actual voluntary customers that it turns a profit, and we’re gonna wipe that out so it goes away. And we’re gonna replace that business with a government agency that loses billions of dollars already, basically nationalizin’ the thing and havin’ politicians create a business model for it that insures it won’t turn a profit.

Which means your tax dollars flood in to make up the difference, so people who screw up managin’ their money will get a 1.4 percent interest rate that you can’t even get at the bank.

Because that’s what this crowd wants.