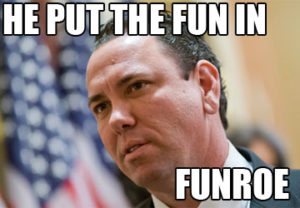 Louisiana’s smooching congressman, Vance McAllister, said he may be getting the FBI involved to find out who leaked the surveillance footage to The Ouachita Citizen of he and his now former district scheduler, Melissa Peacock, making out.

McAllister told KNOE8 News that he would seek a federal investigation “if the parties do not admit it.”

U.S. Rep. Vance McCallister’s top aide said the congressman may send a letter to the Justice Department and House Speaker John Boehner requesting a federal investigation concerning the leak of a video from a security camera in McAllister’s Monroe District Office.

The video, which was publicly posted Monday, showed the married congressman sharing a passionate embrace and kiss with former staffer Melissa Anne Hixon Peacock, who is also married.

The question of who actually leaked the footage has still yet to be answered. Oddly enough, in another turn of events, a West Monroe minister, Danny Chance of the Christian Life Church is claiming that Monroe District Office manager Leah Gordon anonymously sent the footage.

Walsworth and Johnson, who also worked for McAllister’s opponent state Sen. Neil Riser, R-Columbia, both denied seeing the video before it was leaked to the media.

Adam Terry, McAllister’s chief of staff, said he spoke with Gordon about Chance’s allegation and she denied it. Since, Terry told the media that Gordon is still on the payroll, though he specifically said that “the only people with access to the security video were landlord Bill Land, his employee and Gordon.”

Land told the News-Star that he would gladly take a polygraph test to clear his name and remove himself from the scandal. If Land were to pass that polygraph test, he would be eliminated as one of the possible footage leakers, leaving Gordon or another one of McAllister’s staffers.

There are still more questions than answers in this odd sex scandal. For example, one may wonder why a pastor of a church has any information on a political sex scandal and if so, why is he speaking to the media about it? And also, why now? Chance’s allegations beg the question, what did he know about the surveillance footage and when did he know it?

These questions, as well, have yet to be answered.