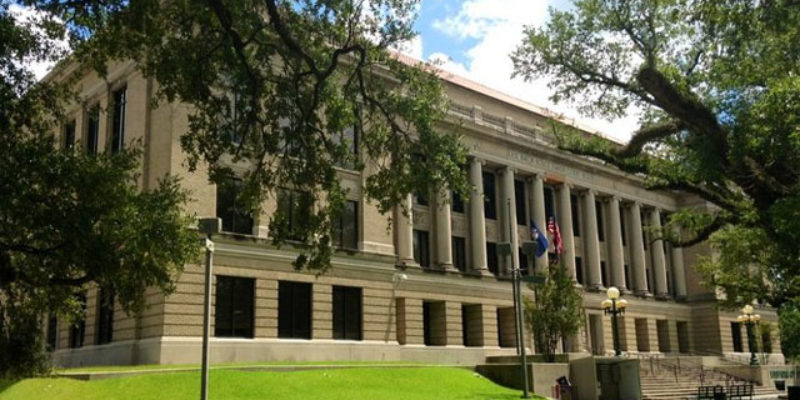 A complex constitutional situation is being made even more complicated by resistance to a bill that may or may not be necessary, putting Louisiana at the forefront of the evolution of voting rights that affects Baton Rougeans.

Controversy surrounds HB 1151 by state Rep. Erich Ponti, which would replace the current districting system of the City Court of Baton Rouge from single-member districts, presently constituted with three majority-white and two majority-black subdistricts, to five at-large elected members. The imperative behind this bill stems from the threat of a federal court order to dismantle the system – the power of it do so not entirely clear itself.

Until the early 1990s, in fact the city did have an at-large system. But as a result of court decisions, the at-large districting system for judicial elections was decided to be potentially discriminatory, depending upon certain factors that could have come into play, and so the Legislature changed the law to create the five subdistricts (and also did so to several other judicial districts in the state). After 2000, as the city was nearing a black majority, it drew these extant subdistricts. However, since then, confirmed by the 2010 census, the city now has a black majority population even as by the numbers three of these remain majority white and two majority black in population composition.

Whether that creates an imperative to change them potentially to three majority-black and two majority-white subdistricts was made murky last summer when the U.S. Supreme Court in Shelby Co. v. Holder essentially said jurisdictions no longer needed U.S. Department of Justice review of districting plans on the basis of circumstantial evidence as written into law. Louisiana had been considered one of those jurisdictions. Now some kind of intent in redistricting or in any other election administration aspect as to discrimination against a minority population must be demonstrated for these arrangements to be declared illegal.

One tactic by those wishing change from the present alignment was to sue the state, in it arguing that the very process of redistricting by the state, which legally does not require municipal court systems to investigate reapportionment after a census, is discriminatory. In 2012, federal District Judge Brian Jackson noted the demographic changes as troubling, and prompted last October the action by the plaintiffs.

But it’s questionable just how much traction such as suit has with the Supreme Court’s decision modifying understanding of Section 5 of the Voting Rights Act from last summer. This means just because Baton Rouge has a 55 percent black population with only two of five minority-majority districts that does not mean this is evidence of illegal discrimination. Thus, the idea is to use Section 3 of the Act to demonstrate that by its past actions the state’s majoritarian branches do intend to discriminate – for example, by failing to redistrict such as in 2004, 2006, and 2013 by not passing bills for that purpose – that the state is a backslider still in need of federal government supervision.

Yet last fall Jackson refused to rule as such while maintaining he might rule against the state in the future, and the fact that two bills were filed this year weakens the argument further, because while HB 198 by state Rep. Alfred Williams that follows the majority of districts being majority-minority playbook, was defeated in a House committee, HB 1151 not only was passed along by the same committee but also subsequently breezed out of the House. Thus, even if it’s unsure whether the federal government, whether by judicial fiat or DOJ action, could force the state to change, the suit may have leveraged the action even as the subsequent action has diminished the value of its claim.

However, HB 1151 has come under criticism from both supporters and opponents of change. The bill would send Baton Rouge back to the at-large system, which while two decades was seen as a mechanism by which discrimination could occur but now very likely would not be judged as such, for the simple reason that with whites as a voting minority, relying upon solid racial voting where the top five candidates run together and each voter cast one vote, given equal turnout by the population subgroups, mathematically white candidates could not win more than two seats. Hence, that method of election cannot be used as a tool to dilute political power of blacks, especially given they are not a targeted minority to be suppressed, but instead the actual majority.

Of course, two assumptions must hold for this to work out, and one, that of mono-racial voting, long has been given a special emphasis in this area of jurisprudence. Along with considerable evidence that it exists in practice, this has special status because a majority can use appeals to this kind of voting to dilute minority political power by blocking them with their numerical majorities from winning elections. This is why the typical solution so often has used where a majority presumably suppresses a minority is single-member districting where some districts have a majority of minorities.

The other assumption has sensitized interests favoring a single member district system because while only 41.7 percent of the most recent registered voters in Baton Rouge were white, in the 2012 mayor-president race 53 percent of the voters who turned out were white. This increases the chances that the eventual distribution of judges might end up under this system three white, two black. This has alerted the chairman of the Senate and Governmental Affairs Committee Sen. Jody Amedee to express skepticism about the bill, chiefly that it may not pass federal muster because of this possibility.

He should note that the argument against an at-large system on this basis in declaring adopting it as a form of discrimination rests on very shaky legal ground. A single member district system sets up a system that attempts to channel votes to encourage or discourage dilution of minority political power. But if there are no votes to channel, where people voluntarily decide, without any impediments to vote legally or otherwise are imposed into the minority by the majority, whether to participate by voting, it’s difficult to claim discrimination occurs because members of the minority disproportionately are uninterested in participating. It’s a tough argument to make that in order for one group to use an alleged discriminatory tactic successfully it must rely upon the very object group of that discrimination to cooperate voluntarily to make this work – and especially when it is the numerical minority supposedly taking advantage of that tactic against the numerical majority.

However, what also may be driving resistance to HB 1151 comes from interests drawing lessons in reverse from over two decades. The at-large system still may be used in a discriminatory way, only now insuppressing, whether intentionally and/or maliciously, white representation among judges. Whether Amedee is shilling for one or both of those against HB 1151 who want to see more black than non-black judges and/or who think the bill might reduce that possibility, or those who worry that the system might produce one or even no white judges, he and others must understand that at-large judicial systems exist in plentitude without valid constitutional challenges; for example, in the state’s 32nd Judicial District (Terrebone Parish; most judicial districts in the state work this way) where by the numbers a majority-black subdistrict could be carved out. This is because jurisprudenceconsiders mitigating factors in establishing these, such as in that at-large districting can produce greater accountability and responsiveness among elected representatives than with single member districts, since people from all parts of the jurisdiction must be considered by the representative (keep in mind that cases are assigned to any court, not pinned to specific subdistricts), and courts have ruled consistently against the notion that jurisdictions by definition designed at-large judicial election systems in order to prevent judges from being more responsive to particular constituents.

For this reason, Amedee’s Solomonic idea of have two single member majority-white districts, two single member majority-black districts, and an at-large position makes for theoretical mishmash. If a major reason for preferring the at-large system is enhanced accountability and responsiveness, why arrogate that only to one of five spots? And if you’re really going to try to run with the idea that an at-large system in a majority-minority jurisdiction is discriminatory to the majority or minority, then why introduce any element of it, even if just one seat, at all?

For legislators dealing with this, they should understand that (1) with last summer’s decision, there may be no imperative at all to change the system, although that doesn’t mean legal machinations couldn’t cause inconvenience to the state; (2) an at-large system is entirely constitutional, especially given that (to use factor a court will evaluate in determining discriminatory intent) the group historically in power now in the numerical minority might actually dilute its own political power in the implementation of such a system; and (3) this system may bring benefits such as increased accountability and responsiveness and more openness in competition (because there won’t be this notion that racially-drawn subdistricts preordain certain candidates with certain characteristics as winners or losers depending on the district). As such, if any change should be made, the at-large system commends itself.