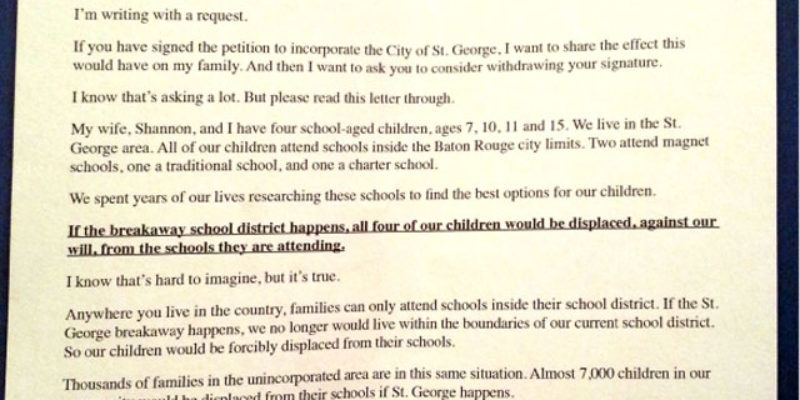 This week across South Baton Rouge and southern East Baton Rouge Parish, mailboxes were invaded by a mail piece purporting to emanate from someone named Gary “Bubba” Plauche’, who complains that his four children will all be “forcibly displaced” from the magnet schools they attend inside the city of Baton Rouge should St. George incorporate. 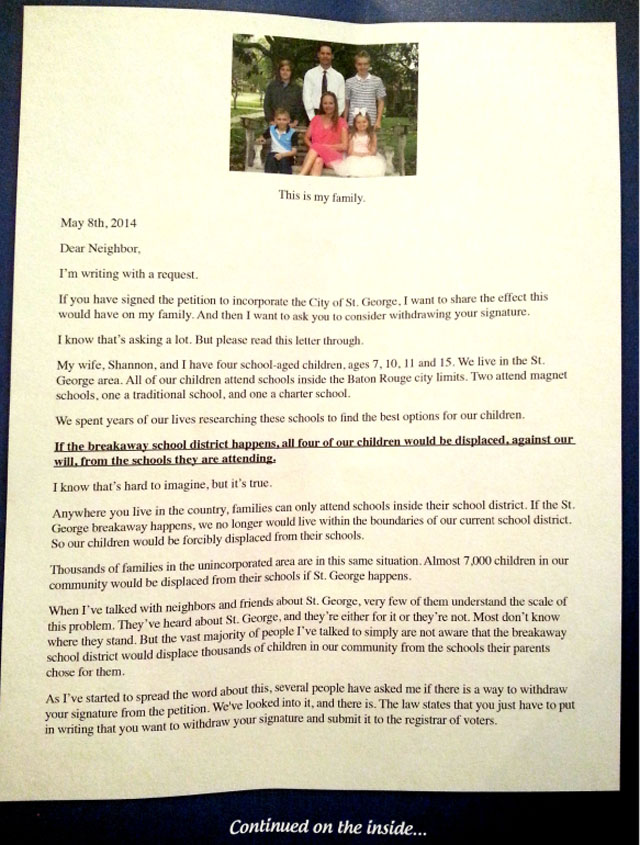 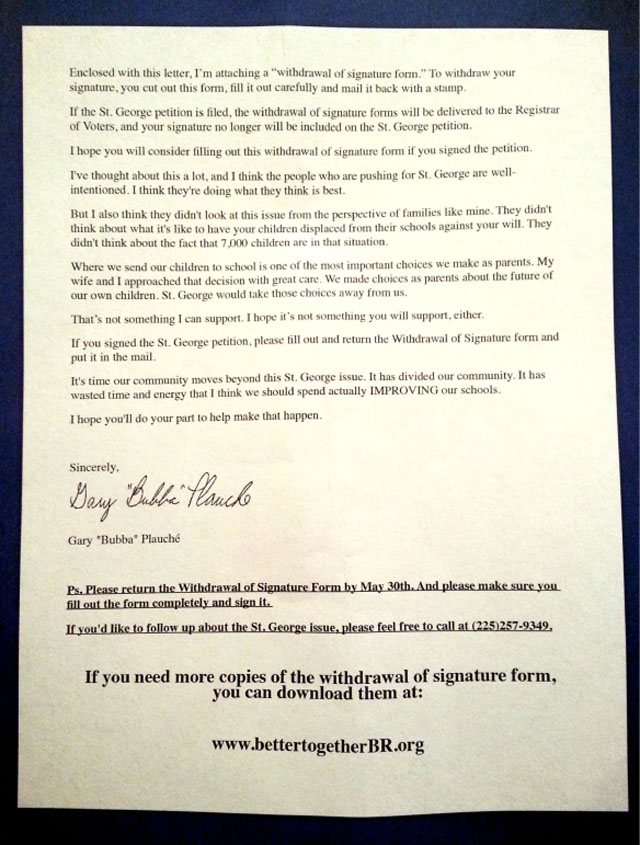 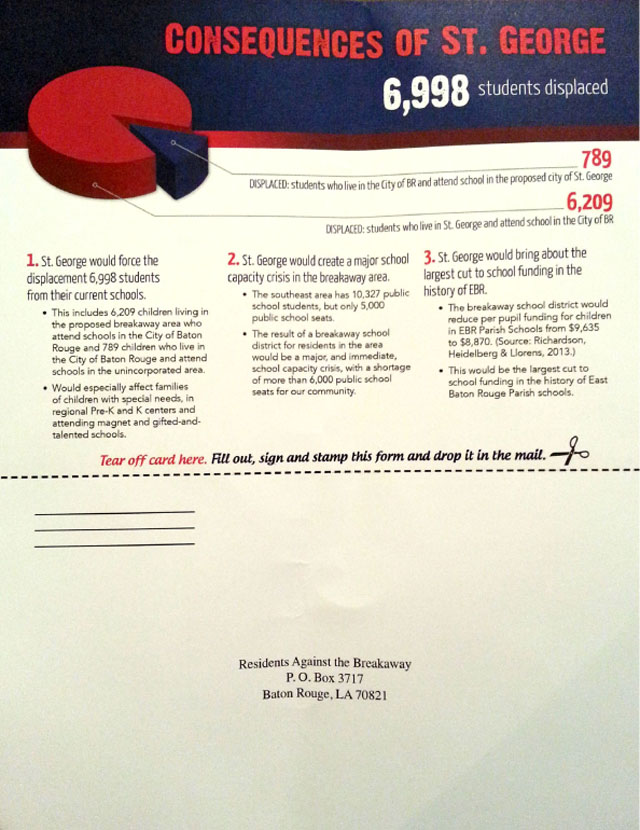 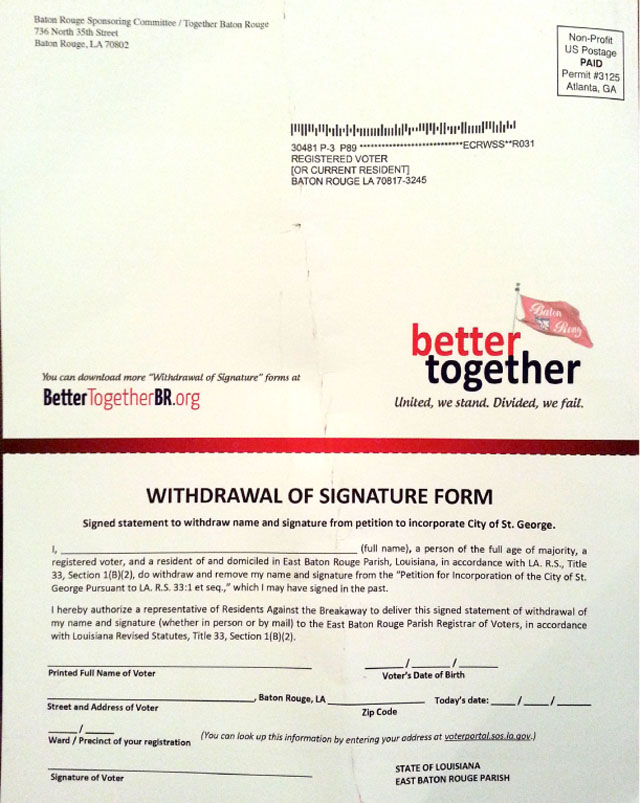 As a political piece, this is dreck of the worst sort. It can’t seem to decide whether it’s an honest, heartfelt appeal to the goodwill of the public or a screaming, red meat political attack. As a result, it’s neither – it’s whiny and condescending, and it makes a passive/aggressive accusation that the stupid St. George petition signers have put the Plauche’ kids out in the educational street through their stupidity.

It also makes a lot of claims which don’t particularly hold up to scrutiny. The numbers don’t hold up all too well – the Together Baton Rouge folks, who are the ones behind this Better Together organization (more on that in a second), are saying that there are some 10,000 and change public school students who live in St. George but only 5,000 spaces for public school kids in schools that would be part of the St. George. And then they claim that St. George would displace some 7,000 kids from their current schools. About 700 of those kids live in Baton Rouge but go to school in what would be St. George schools, but 6,300 of them are St. George kids going to school in Baton Rouge.

To make this piece effective would require some explanation. Otherwise it looks like (1) Better Together’s numbers are made-up, or (2) they think the public is too stupid to understand an explanation of how those numbers actually fit.

If there are 5,000 too few school spaces but 6,000 kids being displaced, then where did the remainder come from?

If you can’t explain that in 30 seconds or a few lines on a mail piece, you probably ought not raise the issue at all.

The use of Bubba Plauche’ as the poster child on the piece isn’t of any particular value. He’s not famous, nobody knows who he is and nobody knows whether his story is true. As such, there is no assumption of credibility on his part. Having him tell the story in first person makes it even worse, because anything the reader perceives as a lie in his message is perceived as HIS lie, and that kills his credibility before he even establishes any.

The use of “against our will” or “forcibly” is far too overwrought for an appeal to goodwill, as well.

This is likely to irritate people, and it’s sure to backfire.

The fact that it hit a whole bunch of addresses of people who don’t live in St. George was an own goal as well. If you’re sending an appeal to people outside of St. George that they should withdraw their names from a petition they weren’t eligible to sign in the first place, it makes it look like you don’t even know the borders of the proposed incorporation.

But it’s more than that. Turns out it’s probably illegal.

And now we’re going to take you through the Postal Code, for which we apologize. Bear with us here…

1.1.1 Organization Eligibility
Only organizations that meet the standards in 1.2, or 1.3, and that have received specific authorization from the USPS may mail eligible matter at any Nonprofit Standard Mail price, including Nonprofit Enhanced Carrier Route prices.

And then there’s this…

Does this piece do that? Well, it identifies itself as being from “Residents Against The Breakaway,” “Baton Rouge Sponsoring Committee/Together Baton Rouge” and “Better Together.” Are those pseudonyms? If so, the postal regs won’t like that.

And now, the finale…

1.6.2 Ineligible Matter
No person or organization may mail, or cause to be mailed by contractual agreement or otherwise, any ineligible matter at the Nonprofit Standard Mail prices.

Call us crazy, but this looks like some lawbreaking going on.

We’ve said before that the Together Baton Rouge/Together Louisiana crowd is a bunch of buffoons nobody should give any credence to. This would seem to be another example proving that contention.