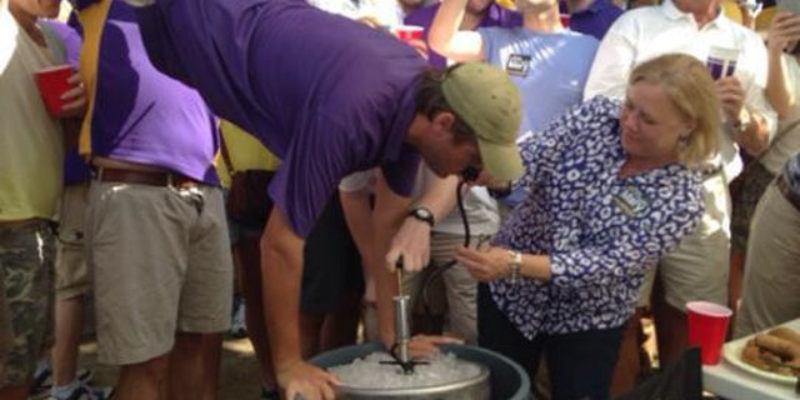 In a bit of irony our readers will surely love, Mary Landrieu sent out a campaign e-mail on Saturday at just before four in the afternoon – which couldn’t have been long after or before she was photographed holding the tap on a keg at a tailgate party on LSU’s campus while someone did a keg stand – touting her plan to make it easier for kids to go to college…

During the Jindal years, funding for Louisiana higher education has been slashed by $700 million, and tuition has jumped by 40 percent on average.

The average student at a Louisiana college or university now has a one in two chance of graduating with debt — and that debt averages $22,789. Meanwhile, the Pell Grant now only covers about 30 percent of the cost of college, compared to almost the entire cost when it was created back in 1972.

Last year, the vast majority of the Senate took action to lower interest rates for new borrowers. But that action left millions of existing college grads struggling to pay off massive loan debts at steep interest rates, and it didn’t do much to make college any more affordable.

We’ve got to fix this. That’s why I’ve launched “Passport to the Middle Class” — an initiative that lets existing borrowers refinance at today’s low rates and restores the original strength of Pell Grants.

Help advance my “Passport to the Middle Class” initiative. Click here to sign my petition today and show your support for college accessibility.

We should give students and their families a fair shot to afford a college education without the burden of a crushing debt.

“Passport to the Middle Class” will make college more affordable. It will nearly double Pell Grant awards to help people afford college, and it will let current borrowers refinance at today’s rates.

Sign my petition to show your support for the “Passport to the Middle Class” today.

We need to pave the way to the middle class, and that starts with an affordable and accessible college education.

Thank you for helping provide a Passport to the Middle Class,

The message from Landrieu on Saturday, all told, seems to be that taxpayers need to pay more to finance keg stands on college campuses.

Three-term Senate incumbents probably don’t need to be advised that if you’re going to campaign on giveaways to college kids to make tuition cheaper, the last thing you want to associate with that is binge drinking on a college campus. It tends to degrade your argument to do that.