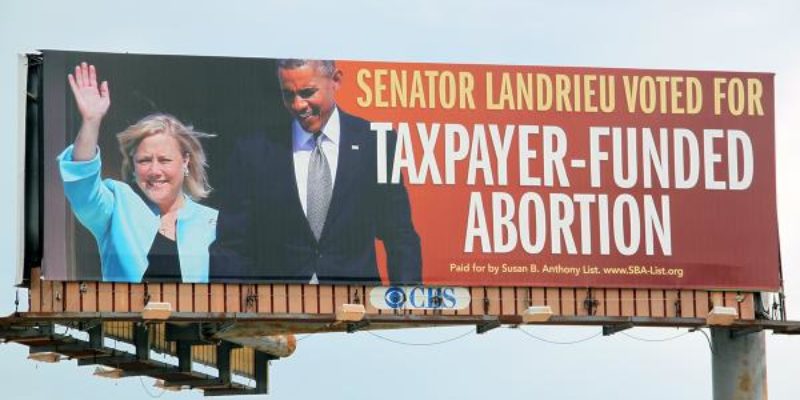 Republicans obviously want to oust Sen. Mary Landrieu (D-LA) this November. However, the Louisiana pro-life movement may be the southern democrat senator’s biggest enemy when it comes to her re-election campaign.

Most recently, the pro-life group Susan B. Anthony List, which Martin Luther King Jr.’s niece Alveda King is a part of, has made a point to rail against Landrieu for her “extreme” positions on abortion, which do not match the state’s largely pro-life voting block.

In a massive billboard at the intersection of Causeway Blvd. and Veterans Blvd. in Jefferson Parish, the Susan B. Anthony List via the Women Speak Out PAC calls out Landrieu for voting to support taxpayer-funded abortions. Here’s the billboard: 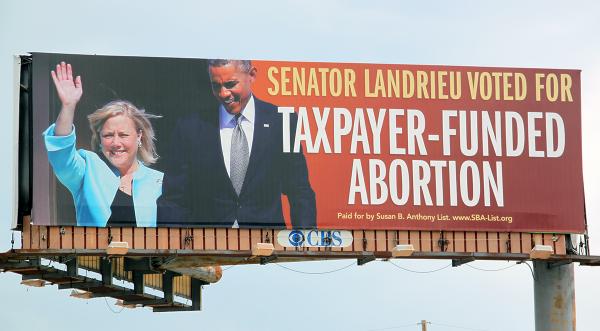 “Senator Landrieu has failed to stand up for pro-life Louisiana values and must be defeated,” said Women Speak Out PAC President Marjorie Dannenfelser.  “Not only has Senator Landrieu voted for taxpayer funding of abortion and against conscience rights, she refuses to support a common sense, compassionate limit on abortion after 5 months. That’s more than halfway through pregnancy and the point at which the unborn child can feel excruciating pain. Senator Landrieu callously dismissed this abortion limit, which is supported by the majority of Americans, including women, as a ‘shame,’ saying that it’s ‘not the norm’ for babies born at 20 weeks to live outside the hospital.”

“To date, the Women Speak Out PAC team has knocked on more than 61,000 doors across the state,” said WSO Louisiana State Director Ruth Wisher. “From now until Election Day, we will pound the pavement even harder working to expose Senator Landrieu’s extreme support of taxpayer-funded abortions and gruesome late abortions after 5 months of pregnancy.”

The Susan B. Anthony List and Women Speak Out PAC are not the only pro-life groups seeking to unseat Landrieu, who has been in office since 1997.

The Louisiana Right To Life has essentially committed to an all-out campaign against Landrieu, slamming her in the Louisiana press for consistently voting pro-choice and for “politicizing” the issue, citing the report where Landrieu said Gov. Bobby Jindal was supporting pro-life legislation to further his own political aspirations.

The Louisiana Right To Life has carefully aggregated Landrieu’s support for abortion here:

Landrieu, for some time, has stated that she personally believes that life begins at conception, but said she still supports abortion and some late-term abortion.

Interested in more national news? We've got you covered! See More National News
Previous Article The YouGov Poll In Louisiana Has Startlingly Bad Numbers For Landrieu
Next Article Cassidy Calls Out Reid For Running Senate Like A ‘Plantation’ But Maness Wants An Apology