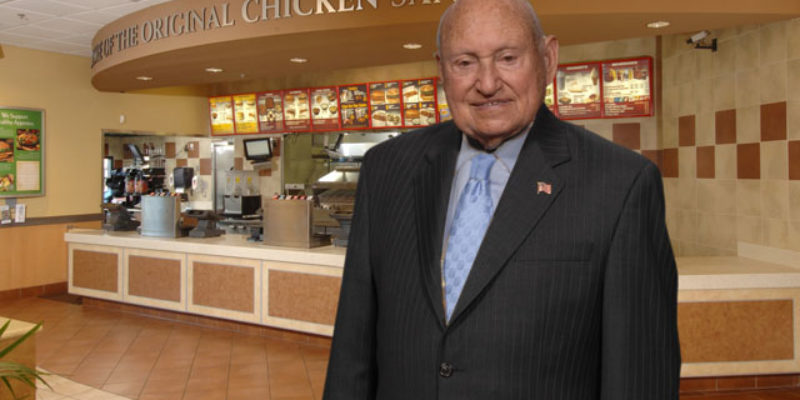 If you don’t know who Truett Cathy is, you might know him by his works. Truett Cathy was the founder of Chik-Fil-A, the chicken nugget chain.

Cathy founded that fast food chain on Christian principles and it has very publicly adhered to them – which has increasingly put it under fire from a dog’s breakfast of left-wing groups and turned it into a controversial figure within an increasingly depraved American culture. The mayor of Chicago, Rahm Emanuel, stupidly suggested he wouldn’t allow a Chik-Fil-A location into his city because the Cathy family has taken a stand against gay marriage.

That’s how the Left operates. How did Truett Cathy operate?

Fox News’ Todd Starnes, via Facebook, relates a story we can all agree shows the character of a great man…

The vandals caused thirty thousand dollars in damage to Truett Cathy’s home.But it was the words they left behind that bothered him the most. Filthy language – scribbled on the walls — by a pair of pre-teen girls.

But Mr. Cathy asked police not to prosecute the young vandals. He feared a criminal record might tarnish their lives.So instead of jail – Mr. Cathy worked out a deal with their parents.

The girls were banned from watching television and playing video games.They had to write a thousand times – I will not vandalize other people’s property.

He wanted to show the girls there was a better way in life.

Mr. Cathy inspired us with his unwavering faith in our Lord – and a delicious chicken sandwich.

Interested in more national news? We've got you covered! See More National News
Previous Article FIREWALL: President Coward
Next Article Have You Seen The E-Mail That Is Forcing Bruce Levenson Out As An NBA Owner?