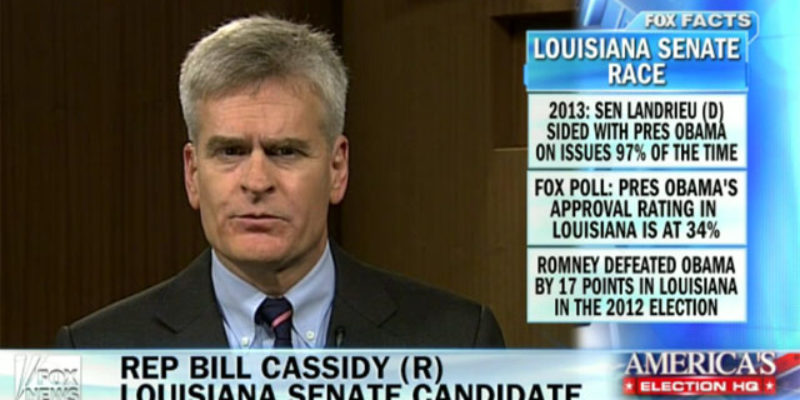 So says a press release out this morning…

U.S. Rep. and Louisiana Senate Candidate Bill Cassidy, M.D. today announced that when elected, he will be appointed to serve on the U.S. Senate Energy and Natural Resources Committee. Senator Landrieu previously chaired this committee but failed to deliver a vote on the Keystone XL Pipeline and only used her “clout” to rubber-stamp radical Obama nominees through the committee. She also donated hundreds of thousands of dollars to anti-energy Democrats who stand in opposition to Louisiana’s future success.

Senator Mitch McConnell said, “I’m excited to announce that when elected, Dr. Cassidy will be a member of the Senate Energy and Natural Resources Committee. I’m confident Dr. Cassidy will use this position to succeed where Senator Landrieu failed. One of our top priorities will be actually passing the Keystone XL pipeline. And Dr. Cassidy will help lead the charge to rein in EPA regulations that are raising utility rates and costing jobs. And he’ll fight for Louisiana families against President Obama’s assault on energy jobs. Louisiana will have a Senator that will use his clout to support energy jobs, not President Obama.”

Dr. Cassidy added, “Senator Landrieu made much of her seat on the Energy Committee, but failed to use that seat to stand up to President Obama’s assault on our energy economy. I’m excited to serve on the Energy Committee and will use that seat to stand up to President Obama, to deliver a floor vote on the Keystone XL Pipeline and to protect Louisiana’s energy industry. Senator Landrieu may have talked the talk on energy but she never walked the walk. Louisiana will now have representation on this esteemed committee that’s with them, not Barack Obama.”

This was a no-brainer, of course, as a Republican Senate caucus which takes pains to make it known how supportive they are of domestic energy production wouldn’t pass up the chance to stack the Energy Committee with people from energy-producing states – and you can’t get a state with a more robust or important energy sector than Louisiana.

One wonders why this announcement wasn’t made earlier. Perhaps it would have been premature, as McConnell and Cassidy and the other parties involved may not have actually met on the question. Either way, the announcement flips Mary Landrieu’s narrative about her clout on the Energy Committee on its head. Now that the Republicans will control the Senate Landrieu doesn’t have any more stroke to offer on that committee than Cassidy would.