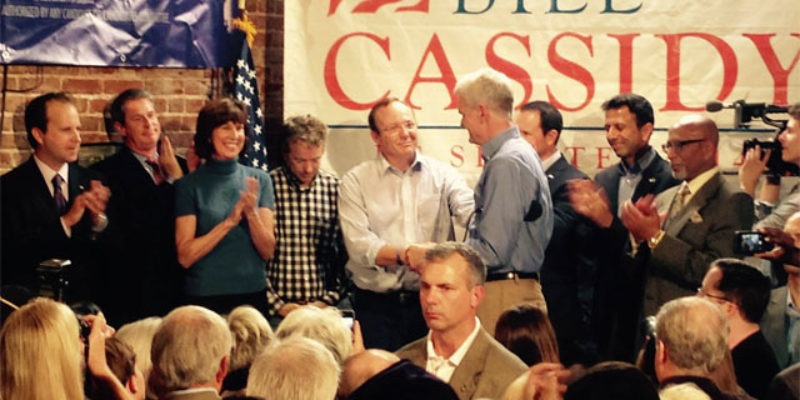 Defeated Republican Senate candidate Rob Maness apparently on his terms endorsed Rep. Bill Cassidy for that office. Which leads to the question of whether he really got anything politically out of that as it relates to any elective future he might have.

Despite almost immediately after it became clear that he would not advance to the Dec. 6 runoff that will feature Republican Cassidy and Democrat incumbent Sen. Mary Landrieu he said he would endorse Cassidy in short order, it was not until six days later that Maness actually did so. Whether he held out the endorsement in exchange for being given a prominent place at or even putting on a “unity” event where he delivered it is unknown. However, that he did not endorse immediately suggests some kind of bargaining went on.

That was a wasting asset of sorts for Maness if he expected to have any future political career, for the longer he held out, the more Republicans would suspect his interests in running for office has little to do with party-building and assisting with implementation of the Republican agenda. The more quickly he bestowed his imprimatur, the more favorably the majority of Republican activists who doubted his commitment to the party’s fielding winning candidates – after all, his presence in this one cost Cassidy an outright win – would come around to embracing him as a future stalwart in office-seeking endeavors, if not becoming a part of the state GOP’s activist network.

And that possibility of becoming a quality Republican candidate for office no doubt animated his rapprochement with party regulars, donors, and organizations, all of whom would be vital for him to gain favored designation for assistance and then victory. But as far as Maness’ future goes, there’s only one problem – he’s a man without a jurisdiction in which to run where he could get an alliance that could carry him to victory, at least in most curcumstances.

The easiest path for Maness would be a Senate reboot, if Sen. David Vitter were to be elected governor a year from now. Maness’ fantasy involves the already-declared candidate Vitter winning, and then as governor appointing him as his replacement for services rendered in helping Cassidy win, given that Vitter is a Cassidy ally. This would give Maness a leg up in retaining the seat for the ensuing election as that term ends at the end of 2015.

Which is why it is a fantasy, for Vitter knows how Maness cost his ally an outright win and never would reward that. Instead, he would appoint somebody like Republican Rep. John Fleming, also considered an ally of Vitter’s on many issues, giving him the advantage in an election and who would be a stronger candidate to keep the seat in any event.

And if someone like Fleming was running, regardless of whether that person got the appointment, Maness would have little chance at winning. Not only would Republican activists likely coalesce around Fleming as most did with Cassidy, a candidate like him would take away one of Maness’ two selling points against Cassidy, that the established politician was not conservative enough. If anything, by some Fleming is accused of being too conservative, never not enough.

The other criticism that Maness used to try to differentiate himself from Cassidy, that the latter was a Washington politician, largely also loses its significance going forward for the simple fact that Maness himself has lost his non-politician virginity. If by the end of next year Maness has declared himself a Senate candidate after being passed over for appointment in the aftermath of a Vitter gubernatorial win, it means he will have been running for office most of the time since his Air Force retirement, or for four years. What else is the definition of a “politician” but someone without a job otherwise who spends his time either serving in office or running for it?

And, naturally, he has no chance at the Senate if Vitter doesn’t win, for while Vitter has said that the governor’s office would be his last elected stop, that does not preclude him running for reelection for this current stop. Not only would Maness have no chance to defeat Vitter, he’d have zero chance of drawing more than a couple of percentage points in the general election.

Moving right along, then there’s the House – except as immovable of an object Vitter might be, just as entrenched, in Congressional District One, is Rep. Steve Scalise. And Scalise has absolutely no incentive to leave it; already in the Republican Party’s third-ranking position, he’s on the track to becoming head of House Republicans and, if the electoral cards fall right, Speaker of the House in the future. There’s no way he’d give that chance up for another elective office.

So what about non-federal offices? With these generally, Maness loses a lot of cachet, because his ambitions, rhetoric, and style always have played to national issues and concerns, so he’d be starting from scratch. And given his penchant for making ideological appeals, when considering statewide offices, the only one of those that suits him is governor, an immediate non-starter for him with Vitter there and other established politicians also contending.

When looking at other state offices, the fact that his appeal was spread widely but thinly detracts from his possibilities there; he did not finish better than third in all but three small parishes where he bested Landrieu, but not including his home St. Tammany Parish. Finally, two of the most secure Louisiana legislators represent his districts, state Rep. John Schroder and state Sen. Jack Donahue, both who are certain to run for reelection next year. Maness’ next shot at these would be with the pair’s term limitation in 2019, and by then either he would have been branded a failing perennial candidate by losing any or all of the offices above, or by not having run for a while all his momentum will have disappeared. Public Service Commissioner was on the ballot this fall and won’t be for another six years, and he would be a real fish out of water running for the Board of Elementary and Secondary Education next year.

Now we’re down to the local level, so, what, parish council, parish president, school board? Can he really translate railing against Washington and Pres. Barack Obama’s policies into a convincing campaign on local issues? As uncertain as that might be, it’s probably his most likely shot at winning some elective government office, even as he would run into the same problems of established politicians/incumbents and difficulty in translating an entire political persona built on an ideological approach to national issues to local concerns. His best bet lies in winning an election to a party position such as the Republican State Central Committee and providing partisan leadership.

The fact is, given the dynamics involved, Maness’ political career probably has peaked. He did as well as he did, a not inconsiderable 200,000-plus votes statewide, only because of a blanket primary system that did not penalize those voting against Landrieu to choose him instead of Cassidy (in every other state but Georgia, under their rules Landrieu already would have won), of a national political climate toxic to Democrats, and by presenting himself in an environment where some conservatives remain suspicious of any candidate that does not express forcefully and often and/or vote according to unyielding allegiance to a perfect conservative record. It was lightning in a bottle, unlikely to be repeated any time soon as those conditions this fall must coalesce again exactly, and it must be remembered that even as his vote total seemed impressive, it still put him a very distant third and would be extraordinarily difficult to transfer in magnitude to any other contest in the foreseeable future.

Whether Maness accepts this or acts accordingly, the star treatment he received at the rally was his swan song. It was not recognition that he had made progress towards reaching a higher summit, but that he had attained a low one in regards to tries for elected office, and it’s all downhill in the political world for him from here on out.