I’m considering writing up a big post about the whole Muslim “no-go zone” issue in Europe and Louisiana Gov. Bobby Jindal’s role in it, and to do so would involve a good bit of research and effort.

With this crud I’m fighting off, I really don’t have it in me today. But as this stupid controversy continues, of course, it gives the usual suspects an opportunity to beat Jindal up as a dunce or a carnival barker or whatever other tag they’d like to lay on him. That he’s trying to gin up support for a presidential bid, something which is a colossal long shot and frankly not warranted by his performance as Louisiana’s governor, only raises the stakes.

Without going into too much detail, there is a legitimate criticism to make of Jindal. Frankly, the whole concept of “no-go zones” is something he didn’t invent; he’s taking that from others who probably should have come up with a better description of the Muslim enclaves throughout Europe where it’s not safe to go if you’re not a Muslim and where the denizens are busily isolating themselves culturally from the greater society around them. The test for these places is basically whether a woman can walk alone in, say, a knee-length skirt and heels without a headscarf on in the streets of these neighborhoods and not be harassed or molested or worse. It’s not that the cops won’t go in, or that Sharia law is solely practiced in those areas or any of the stuff that’s been alleged. And it’s certainly not that there is some formal legal jurisdiction set up in these places. But there is ample evidence that if you go into one of these places you’re going to know pretty instantly that it’s not exactly France, or Sweden, or Belgium or the UK you’re in.

But they’ve been termed “no-go zones,” for better or worse. And while you’ve probably seen CNN accost Jindal over calling them that, here’s something from CNN’s own air in 2012…

That’s Whitechapel, in East London. And of course, all the “responsible” Muslims are saying it’s terrible that the sharia police are out – and yet they’re out in sufficient numbers that CNN found out about it. And if you Google “Whitechapel sharia patrols” you’ll find a good deal of material more recent than that 2012 CNN report, so those patrols haven’t gone away.

Jindal is at fault for more than just taking on the “no-go zone” question. He’s clearly trying to play this up for everything he can get. This went out yesterday… 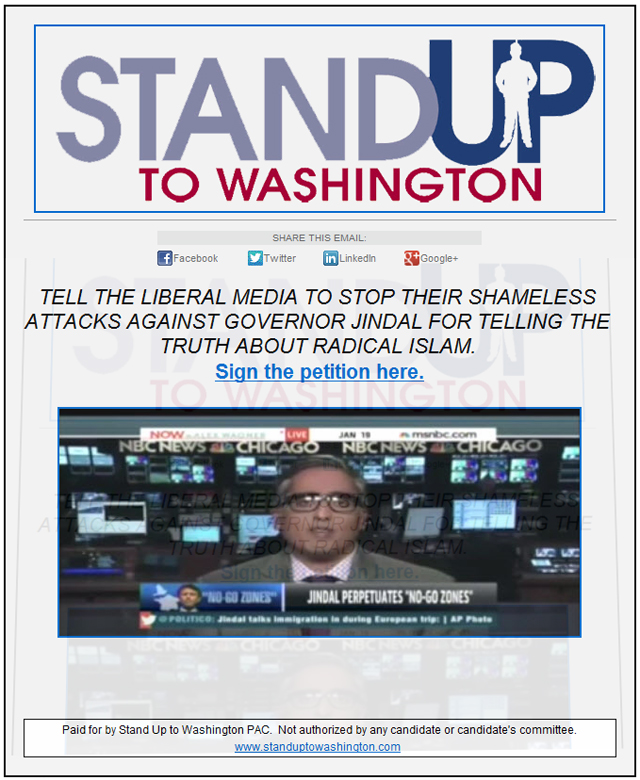 Which is a fairly shameless attempt at building a prospective donor list out of this mess. That’s what politicians do, of course, but it’s not exactly statesmanlike to go and start a controversy to put your name in the news and then whine that you’re being attacked by the “liberal media” and somehow the defense to those attacks is a $5 donation from Joe Six Pack.

Nobody makes out well in this fight, frankly. Probably the worst of the bunch is the Times-Picayune, though, which originally reported on the controversy by essentially manufacturing a quote by  David Cameron to make it sound like the British PM was calling Jindal an idiot (Cameron was actually talking about Fox News terrorism expert Steven Emerson, who went overboard and said the English city of Birmingham has gone “totally Muslim” when that hasn’t happened quite yet). And then yesterday, there was the headline in an editorial saying that “Jindal Isn’t Speaking For Louisiana” which might well have been written by Karen Carter Peterson. It used the ‘no-go zone” controversy as a jumping off point to whine about the state’s budget deficit, which Jindal certainly bears some responsibility for, and then to lambaste him for not accepting the Medicaid expansion.

Regardless of whether Jindal made himself look unpresidential in London, it’s laughable for the Times-Picayune – fresh off their endorsements of Forest Wright and Mary Landrieu – to claim to speak for Louisiana. Perhaps if the Picayune wasn’t such a left-wing rag these days they’d be in a better position to hold Jindal accountable.