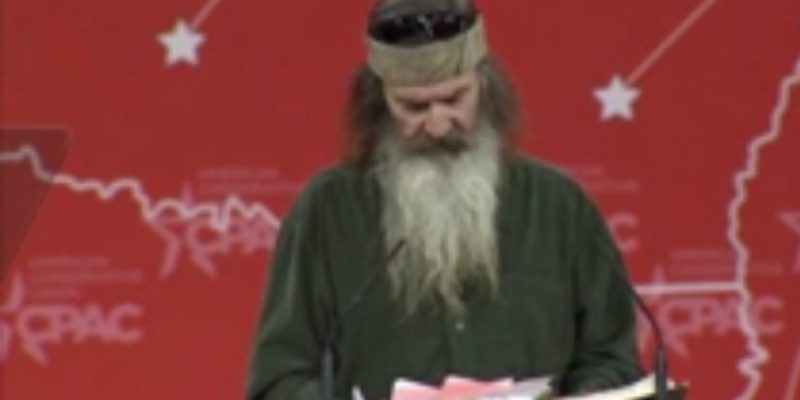 Citizens United and Breitbart.com awarded West Monroe’s own Phil Robertson, the owner of Duck Commander and one of the stars of A&E’s “Duck Dynasty”, its Andrew Breitbart Defender of the First Amendment Award at CPAC. Robertson then went into a speech that was a cross between religious evangelism and political. Robertson was introduced by his cousin, former Congressional candidate Zach Dasher, who may possibly run for the State Senate this year.

The room was only half full as David Bossie of Citizen’s United praised Robertson’s comments as he “fought for his faith and values.” Robertson then took the stage to a standing ovation by those who were in the room. Robertson came out wearing hunting pants and a button up dark green shirt that Robertson called his “church clothes.”

Robertson said, “All of should be able to speak freely where we don’t have to be awarded.” Robertson then pulled out his Bible, held together by duct tape, and said “keep your Bible and woman close by” in order to avoid scandals.

Robertson then said he was about to utter the three words never uttered by a politician, “I love you.” Robertson said that if he was invited to a prayer breakfast, he would also do something unheard of, “pray and then sit down.”

Robertson also attacked Obama for his “you didn’t build that” remarks. He pointed out that he didn’t build out Duck Commander with “government assistance.”

Robertson then read a general order from the Revolutionary War by General George Washington that forbid drunkedness and swearing among other moral offenses. Robertson also read other pieces from General Washington that featured appealing to God. He said, “I’m reading you Grand Old Party what the founder of nation is saying” in an appeal for the GOP to not abandon social conservatism.

Robertson then read quotes from the second President John Adams concerning religion and it’s role in government. Robertson said, “if you lose your religion, you lose your morality. ” Robertson then read a fact that he says is from the CDC that alleges “110 million Americans have a sexually transmitted disease.” Then, he made an appeal for people not to have sex outside of marriage. He called the high rates of sexually transmitted disease “revenge of the hippies.”

The left has already seized on that quote.

Robertson then read a quote that he said was from James Madison that “this Constitution was made for a moral and religious people.” Then Robertson said “the White House is full of others.”

Meanwhile, the crowd starting filing in for Jeb Bush’s speech since he was scheduled to follow Robertson. Robertson then kept speaking and ran over the time alloted. He was given a respectful, but not an overly enthusastic applause from the now standing room only crowd.