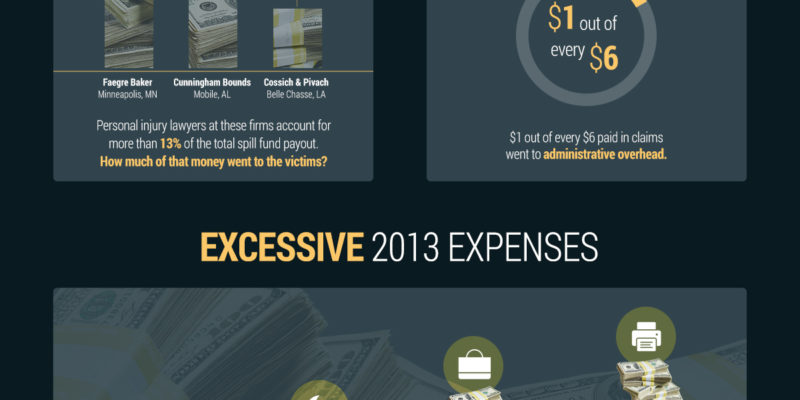 BATON ROUGE, LA– Nearly five years after the Deepwater Horizon disaster in the Gulf of Mexico, a legal watchdog group is calling into question who is benefiting most from the unprecedented class action settlement set up to compensate victims in the aftermath of the 2010 oil spill.

“Class action lawsuits are notorious for producing highly lucrative legal fees, but the lawyers and administrators profiting off of the BP settlement have brought this unscrupulous practice to a whole new level,” said Louisiana Lawsuit Abuse Watch (LLAW) executive director Melissa Landry.   “Transaction costs stemming from the oil spill settlement are easily the largest in American history, with $471 million being spent on administrative overhead in 2013 alone.  That’s nearly a half a billion dollars—about as much as it cost to run the entire City of New Orleans that year.”

“The city funded schools, roads, hospitals and provided police protection, affordable housing, and many other important public services, while lawyers and administrators working on the oil spill settlement used roughly the same level of funding over the same period of time to process less than 25,000 claims?  Something about that math doesn’t add up.”

A new infographic published by LLAW illustrates some of the staggering administrative costs stemming from the settlement. 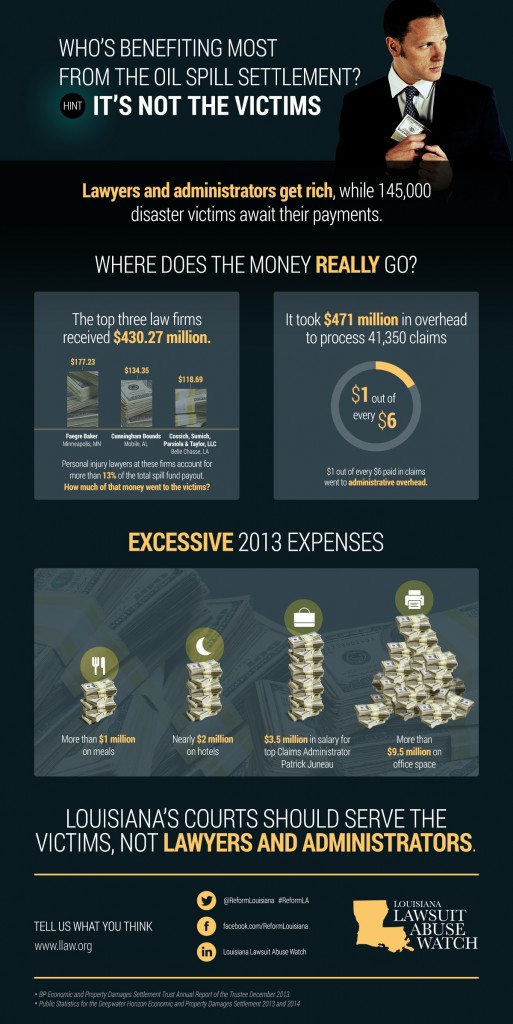 “These outrageous administrative costs make it perfectly clear who is benefiting the most from the oil spill settlement—and it is not the victims,” Landry continued.

“While 145,000 disaster victims await their payments, lawyers and administrators are getting rich.  Obviously this is not what the settlement was designed to do and something needs to change immediately.”

“We urge US District Judge Carl Barbier who is overseeing the case to take a close look at how the settlement is being administered and make the necessary changes.  After all, this case is first and foremost about the people, the families, and the businesses that were affected by the spill—not the lawyers and administrators who showed up in its aftermath to profit from it.”