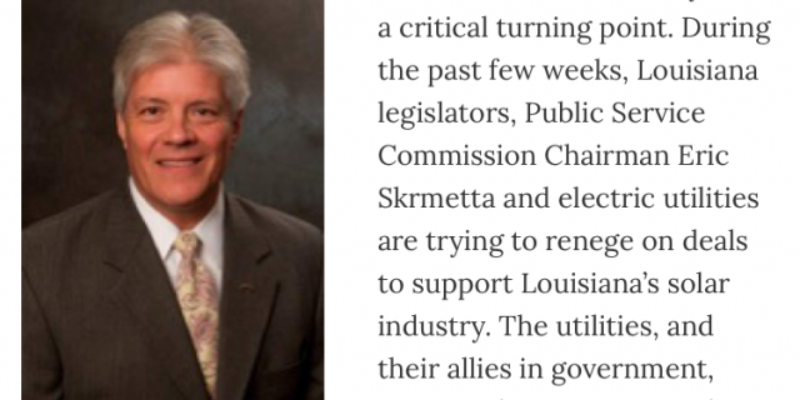 About a month ago, I covered the Debbie Dooley/Green Tea Coalition propaganda road act, which is now making its Louisiana state legislative debut, for the American Spectator…

It was reportedly Eric Hoffer who offered the famous, entertaining political assessment that “Every great cause begins as a movement, becomes a business, and eventually degenerates into a racket.”

Hoffer’s observation has been borne out on a consistent basis, and examples proving it are legion. The most recent comes courtesy of a Tea Party leader from the Atlanta suburbs named Debbie Dooley, who is now traveling the South shilling for solar energy as part of the Sierra Club-funded Green Tea Coalition.

Dooley has set up shop in Louisiana of late, attempting to save the doomed state tax credits for solar energy that a recent study calculates is costing Louisiana taxpayers a net $63 million per year — making those tax breaks a certified goner amid a budget deficit of some $1.6 billion thanks in large part to depressed prices of oil and gas. There is little appetite in the state legislature, and not much more on the Republican-controlled Public Service Commission, which regulates utilities in Louisiana, to continue subsidizing rooftop solar energy.

As Kevin Boyd reported last night, today Dooley is having a press conference in downtown Baton Rouge to agitate for “solar rights,” which includes a demand for net metering and “self-generation,” which is said to be a “fundamental property right.”

Net metering is the vehicle by which people with solar panels on their roofs can measure power they sell back to the utilities, without which it would never be worth anyone’s while to have solar panels (even with the big state and federal tax breaks afforded to solar customers). A study conducted for the Louisiana Public Service Commission earlier this year (which the solar industry promptly attacked as biased and slammed its author, LSU energy expert David Dismukes, as a shill for oil and gas) concluded that Louisiana ratepayers are losing $2 million a year to net metering. As for “self-generation,” nobody denies you’ve got the right to generate your own power. The issue is whether you can sell the surplus juice your solar panels generate back to the utilities.

This is something which must be understood. The solar companies who are backing this PR push by Dooley and the rest are demanding that their customers, the people with the panels on their roofs, get to use the transmission lines supplied and owned by the utilities for free in order to sell the excess power those panels generate back to the utilities…at retail rates.

A typical utility company’s infrastructure costs break down to 42 percent being spent on transmission (58 percent is spent on actual power generation). So we’re talking about a major expense on assets the solar people demand to access for free, and they’re not even willing to let the utilities have a margin on the juice itself. It isn’t like PosiGen and Solar City and the rest of the solar panel manufacturers who are backing this PR push are talking about building transmission lines of their own so as to facilitate their customers selling power to their neighbors. They want what the utilities have, and they want utility ratepayers to pay for it.

Dooley actually showed up in the comments under Kevin’s post to tell us she’s not being paid by the solar industry (Yeah, right) and that she’s not pushing to keep those tax credits but instead wants to do away with all the subsidies and other freebies the oil and gas industry get. Fair enough, except here’s what the Baton Rouge Advocate published about her group just a month ago…

And in a couple of weeks, she’s coming to Louisiana to help in what this state’s solar industry promises will be a full-court press to protect a tax credit it says is instrumental to installing about 15,000 systems that transform the sun’s rays into electricity in individual homes and small businesses, creating about 1,200 jobs along the way. All of that will end, the industry claims, if Gov. Bobby Jindal succeeds in ratcheting back the tax credit, which is due to expire in 2017, as a way to raise revenues.

“It’s good that he wants to cut the budget,” Dooley said. “But conservatives want to champion free market choice, and not let government pick the winners and losers” by retracting tax breaks for solar businesses but not for oil and gas or utility companies.

That’s all well and good, said State Revenue Secretary Tim Barfield, but the solar tax credit is one of the largest credits, and its cost to the state’s taxpayers is one of the fastest-growing. The solar credit cost $63.5 million in 2014, up from $39 million in 2013.

“What you see in the numbers is you see an exemption that’s really growing more than the economy,” Barfield said. “That’s a big part of the concern.”

Maybe they realize that tax credit is a dead letter. There are three bills on the House floor that would degrade it or kill it outright, and there are similar maneuverings in the Senate. The general word is that at best the solar tax credit will limp along until 2017 before it sunsets and is never seen again in this state.

But in her comments Dooley says she’s really just trying to kill all the subsidies, and that means oil and gas shouldn’t get any. In support of her allegation that oil and gas get lots of government freebies, she threw out a link to a Lee Zurik report from Fox 8 in New Orleans about incentives oil and gas companies got from Louisiana Economic Development, but that report significantly misses the mark of backing Dooley’s claim. The incentives Zurik denounces in that report are not incentives for oil and gas per se, they’re incentives to get companies to make capital investments in manufacturing facilities. It just so happens that Cheniere Energy and Valero and Exxon ended up taking advantage of those incentives instead of Ford and Hewlett-Packard and Boeing.

If the complaint, moreover, is that oil and gas gets favorable treatment on things like royalties to the state or severance taxes, then it might be noted that there is no severance tax on the collection of solar energy. We’re not going to suggest one, but if Dooley and her solar friends want to treat apples as oranges and say credits against severance taxes mean oil and gas is subsidized while they’re getting tax credits for installation of solar panels – tax credits offsetting some 80 percent of the cost of having those panels installed on your roof! – without any taxes on the energy collected therein, they really don’t get to complain about corporate welfare for fossil fuels. 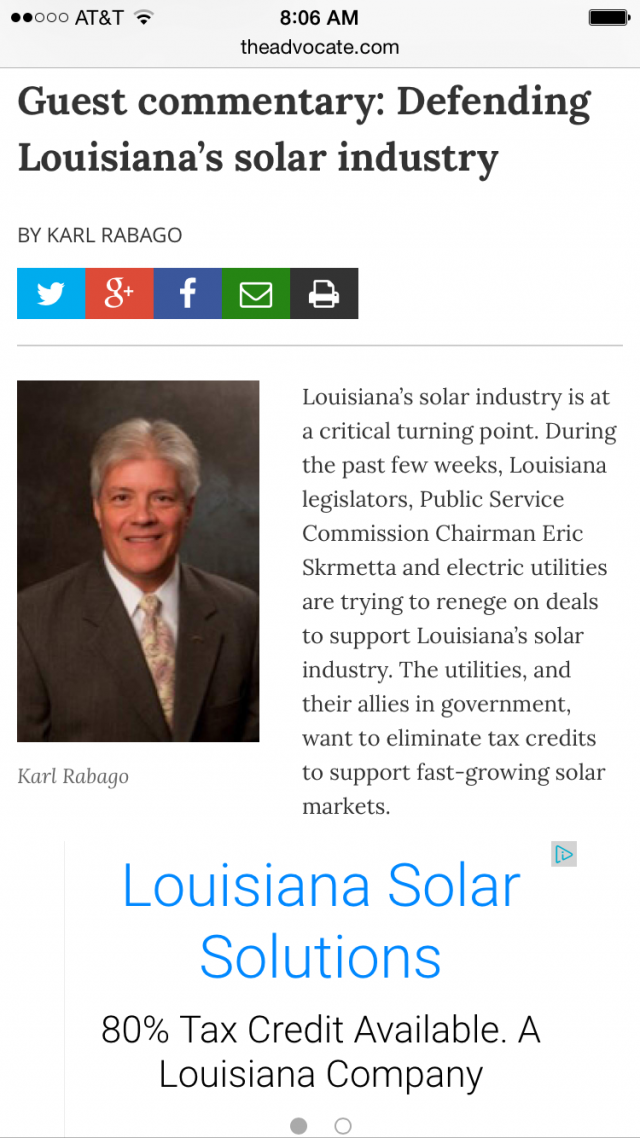 Meanwhile, the Tea Party of Louisiana is practically bursting at the seams in denouncing Dooley’s representation as a Tea Party muckety-muck on behalf of the solar industry. Here was TPOL spokesman Bob Reid in an e-mail blast last night…

The Tea Party of Louisiana (TPoL) has learned that a lobbyist, making the dubious and questionable claim of being both a “Tea Partier” and a “conservative”, named Debby Dooley is planning to hold a “Conservatives Support Solar” – (Ha! Ha! What a Joke) – event and press conference that’s nothing more than an excuse to connect “Big Money Solar Fat Cats” with Louisiana legislators, where they plan to offer “buckets of campaign cash” in an attempt to “buy” support for continuing Louisiana’s Solar Tax Credit give away. A program that takes tax money from schools, hospitals, and roads, and gives it to “crony capitalists” in the form of “corporate welfare.” Is Louisiana’s budget now, miraculously, in such good shape that we can continue such irresponsible waste?

TPoL wants to take this opportunity to remind our elected representatives of two important facts: First, anyone can falsely claim to be something, but “conservative is as conservative does”; judge the actions, not the rhetoric; and two, no legitimate, viable business needs a government subsidy in order to exist.

TPoL reminds our legislators that an election is coming soon, and the voters are watching. TPoL urges our legislators to decline this corrupt invitation and send a message to both the “Fat Cats” and the ordinary citizens. Tell everyone, by not attending this unseemly “auction”, that in Louisiana, the “keys” to the public treasury are not for sale to the highest bidder.

TPoL urges our legislators to do the right thing, end the giveaways, end corporate welfare, and restore sanity to our state budget. Stop robbing average people and breaking the state budget so a few well connected fat cats can keep getting their unreasonable corporate give aways.

The Tea Party of Louisiana wants to make its position on ending refundable corporate tax credits including the solar energy tax credit otherwise known as Crony Capitalism “perfectly clear” – END THEM ALL NOW !!!

In light of Louisiana’s current budget situation, let’s end the insane give aways that are called “refundable tax credits” and let’s start by killing the solar tax credit!