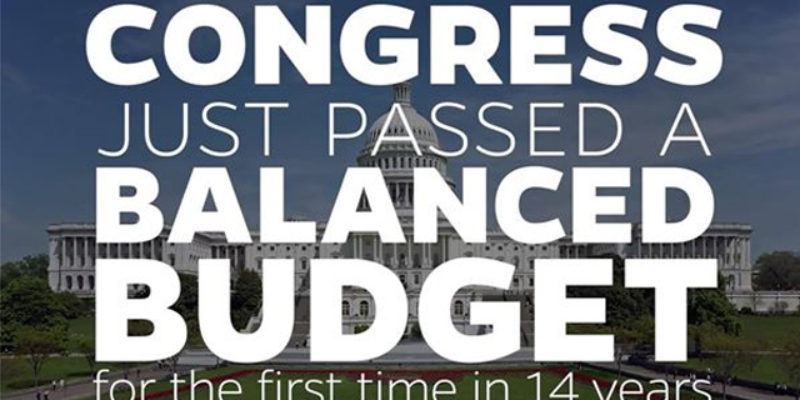 The Senate passed the Republican budget by a 51-48 vote yesterday. It’s not a terrible document; it has a decent amount of cuts to it – the number is $5 trillion.

But that’s over 10 years. And since there will be a budget every year between now and the end of that time, you can’t say a budget that balances in 10 years is a balanced budget no matter how sensible and meritorious it might be.

But John Boehner did it anyway.

Posted by Speaker John Boehner on Tuesday, May 5, 2015

This is the kind of thing which drives people like me up the wall. It’s embarrassing as a Republican to see my party’s leadership in DC push such a ridiculous assertion that a budget which projects to be in deficit for the next decade is “balanced” because at some point it might balance.

No one believes this. No one. Particularly no one on the Republican side. And particularly no one outside of Washington. People who even pay attention to the federal budget gave up on the fiction of 10-year budget projections having anything to do with reality about the time Congress started using them.

The 10-year budget is a lie. Next year there will be a presidential election, and it’s guaranteed that this current budget, and/or the projections which go with it, will go out the window regardless of who wins. If a Scott Walker is our next president and Republicans gain seats in the House and Senate you can bet the fiscal 2016 budget will get cut a lot more in future years. If Hillary Clinton or some other Democrat wins and drags control of the Senate along, the budget will grow. So why even bother to project a surplus in 10 years?

Democrats don’t even do things like this. Democrats will lie, sure, but when they do they’ll offer up far bigger and sexier lies than this.

Boehner is telling a feeble lie and it’s not even all that interesting a lie. The budget doesn’t kill any federal programs of note (of course, you need appropriations bills to do that and all this does is provide a framework for those), it doesn’t reform tax policy, it doesn’t alter the size and scope of the federal budget. Boehner doesn’t make the claim it does, which would be responsible, and yet he’ll lie and say it balances when everyone knows it doesn’t.

And you wonder why even Republicans don’t have any use for this guy as the House Speaker.

Interested in more national news? We've got you covered! See More National News
Previous Article SADOW: Violating The Law To Raise Your Taxes At Louisiana’s Legislature?
Next Article THE RACE IS ON: Dardenne Bashes Vitter For Skipping Senate Budget Vote