We’re going to present this a little bit backwards, if you’ll indulge us, because doing so might well make more sense of all this data.

First, it has long been the assumption on our part, but not just on our part, that the 2015 Louisiana gubernatorial race breaks down into three fairly equal slices of the vote for the October primary – one-third belonging to David Vitter, one-third belonging to whatever Democrats end up running and the last third belonging to non-Vitter Republicans. As the field has filled in so far, that means Vitter commands a third, John Bel Edwards commands a third and Jay Dardenne and Scott Angelle are fighting to secure the last third.

And that means a tough road for Dardenne and Angelle, each of whom has to first eviscerate the other in order to secure the vast majority of his available third, and then venture into Vitter and Edwards’ territory to edge one or the other into the runoff.

And for Angelle, it’s an even tougher road – because, as we’ve noted, he’s got the biggest problem of name recognition of the four and he also has to find a way to get around being defined as “Jindal’s guy” in the race – because every recent poll shows the current governor, who appointed Angelle to several positions in state government, isn’t a political asset in a major Louisiana race anymore.

With all that said, we now have the current legislative session in which conservative policies are being drowned in bathtubs amid an orgy of tax increases, insane votes like the Senate passing a far-left Equal Pay bill, a failure of support for something so basic as Paycheck Protection, a Herculean effort just to get Mike Johnson’s HB 707 protecting Christian businesses whose faith makes participation in a gay wedding problematic out of committee, and so on. This legislative session, and the cavalcade of Republican backsliding and betrayal, is going to energize the piece of the state’s electorate that poll after poll shows is the largest bloc of voters.

And none of the candidates is better poised to take advantage of those developments than David Vitter. Here’s an example of how he’s aiming to do just that which popped up yesterday… 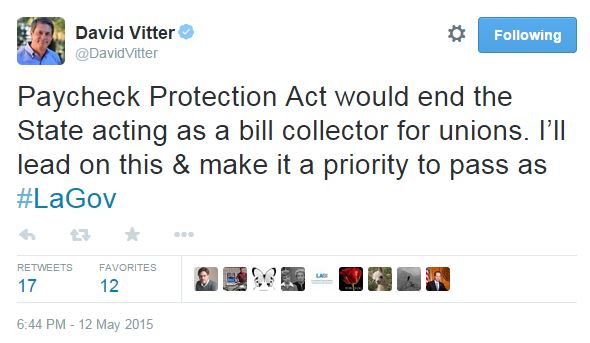 With all that as prologue, yesterday Southern Media and Opinion Research put out its biannual survey of the state of Louisiana politics, and without seeing into the guts of the survey we’re going to analyze it as though it’s accurate – because why not?

The headlines in the papers focused on the most obvious result in the poll – namely that Jindal’s approval rating is down the tubes at 31.8 percent, with a 64.7 percent negative rating. But Jindal’s approval number has been even lower than that in polling from other sources, so it’s really not all that newsworthy unless you can’t get enough of “how awful Jindal is.” 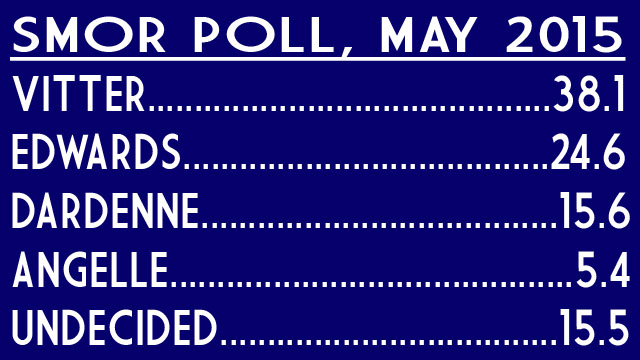 The major takeaway from those numbers? We’re not really looking at a three-way split right now, or at least the thirds aren’t as equal as previous polls have indicated. Vitter’s third is bigger, and it looks like the last third might be as well – while the Democrat third is smaller.

Either that, or Edwards is having trouble consolidating the Democrat third of the vote.

If it’s the latter, that would seem to be to the benefit of Dardenne – but Dardenne is still nine points behind Edwards and barely outpaces the undecideds, which would mean if the theory was that Dardenne could run as a Republican who was acceptable to Democrat voters and had a better chance of beating Vitter than Edwards, he’s a bit behind the curve so far. If Dardenne was making headway with Democrats at this point you’d expect him to be higher in these numbers.

But while Dardenne can shrug off the results of the SMOR poll by attesting that he hasn’t put a lot of money out on his campaign yet and he has lots of time to build a coalition of centrists, “strategic” Democrats and Republicans who don’t like Vitter, these numbers have to be a bit more alarming for Angelle.

After all, as we reported at the end of last month Angelle has gone through almost a million dollars so far in this campaign – he’s raised an impressive $2.1 million and claimed $1.2 million in cash on hand at the close of the last reporting period. For a million bucks in spending you’d really want to be higher than 5.4 percent. That’s a bad number for him and it could make it tough on his perceived competitiveness – though his camp can certainly point to other successful gubernatorial candidates in this state’s history, like Mike Foster and Buddy Roemer, who came out of nowhere to catch fire late in a crowded race.

Except the release on the SMOR poll said this…

The poll’s sample was 70 percent white, which seems about right for a gubernatorial cycle without a high-profile Democrat draw for black voters in it. 13.2 percent of 70 percent comes to 9.24 percent of the vote Angelle could get without crossing racial lines.

And according to this poll some 6 percent of the vote is undecided black voters. One would figure at least half (3 percent) of those are likely to go to Edwards, and probably more like 2/3rds (4 percent) or 5/6ths (5 percent). That would put Edwards pretty close to 30 percent even if he had no white voters come to him out of the undecideds.

Angelle, in order to make the runoff, would have to steal voters from the other three candidates – and particularly Dardenne. But even if he got all of Dardenne’s vote he’d still have to get the majority of the undecideds to even get within striking distance of Edwards for the runoff.

A steep hill to climb, for certain.

But for Vitter, 38.1 percent makes him almost a mathematical certainty to make the runoff unless his campaign collapses, which nobody really thinks would happen to a battle-tested, heavily-financed veteran like he is. And if he were able to get half of the white undecided voters, he’d run over 40 percent in the primary. At 42 or so, he’d need to find eight percent out of the 21 currently going to Dardenne and Angelle, plus the other half of the white undecided voters – essentially a third of that number – to get over 50.

Not a steep hill to climb.

And what we come back to is this legislative session, which serves as a stiff drink for the 45 percent of the Louisiana electorate describing itself as conservative. That 45 percent is going to be not only the largest bloc of voters in the state, but fueled as it will be by outrage over the poor performance of the legislature and the current governor, it’s going to be the most engaged. And that plays into Vitter’s hands almost as if he’d written the script for the session.

Interested in more national news? We've got you covered! See More National News
Previous Article Here Are The 4 Republicans Who Sided With Cedric Richmond And Dems In Favor Of Late-Term Abortion
Next Article Where Is The Outpouring Of Joy And Gratitude From The Solar People For This?