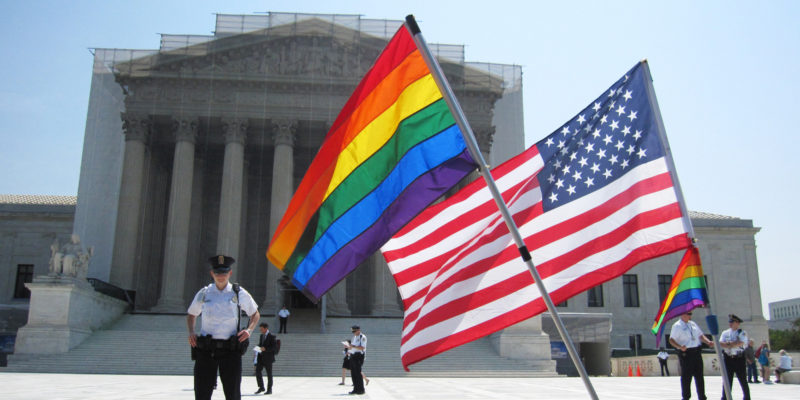 As most gay rights activists are calling today a victory as the United States Supreme Court ruled 5-4 to recognize marriage between two consenting adults, including same-sex couples, across the country, social conservatives are in a panic.

However, the pro-gay marriage ruling is a blessing in disguise for conservatives and here is why:

#1: There Will Be More Family Units

Now that gay marriages are considered a constitutional right in all 50 states, the amount of family units is bound to dramatically increase. Gay and lesbian couples have for some time been essentially married without the approval of the state. But, with this decision, there will be more unionized family structures, which means more stability and more personal responsibility. The days are gone where gays must live a single life-style because they cannot get married. Instead, gays will be more motivated to form committed, loving relationships, which only helps the structure of society in the long-run, as we’ve seen how broken house-holds are bad for everyone involved. Monogamous relationships among gays will now be the norm as the ultimate goal for many will be marriage.

#2: There Will Be More Conservatives Than Ever

Welcome to a new era of the gay conservative. As we’ve seen in the last few elections, married people overwhelmingly vote Republican. In 2012, Mitt Romney won over 54 percent of married voters. While its not proven that people get more conservative as they marry, it is proven that married people are allies to the conservative movement. Why? Because conservatives and Republicans have a tendency to focus on economic issues, including tax breaks for everyone, smaller government and reality-based policies that impact married people and family units. The Supreme Court’s decision today will usher in a new time period where gays become more and more conservative as they focus on the stability and economic impact by the federal government on their relationships and families.

Gay marriage will no longer be an issue on the campaign trail for Republicans. The Supreme Court has ruled, so it really no longer matters what a presidential candidate thinks on gay marriage. Even if someone like Sen. Rand Paul (R-KY) or Gov. Scott Walker disagree with gay marriage, who cares? It’s essentially a non-issue. Instead, this will give conservatives and Republicans more time to focus on the big issues, like economic stability and personal liberty for those gay individuals as they begin a new chapter in the country. If gay marriage hurts anyone, it undoubtedly hurts Democrats. The black community is by a huge majority not down with gay marriage. In fact, 67 percent of black protestants do not support gay marriage. Therefore it will be harder for Democrats to win over black voters, meaning we could see a huge upswing of black Republicans in the next election.

#4: Gay Marriage Is A Win For Religious Liberty

Social conservatives are more than likely losing it across the country, claiming that gay marriage means the end of religious liberty. However, this could not be further from the truth. In fact, in the Supreme Court’s ruling today, Justice Kennedy wrote specifically that though gay marriage is protected by the federal government, it is not at all protected by any religious institution that finds it objectionable. “It must be emphasized that religions, and those who adhere to religious doctrines, may continue to advocate with utmost, sincere conviction that, by divine precepts, same-sex marriage should not be condoned,” wrote Kennedy for the majority. This decision is not an assault on religious liberty like Gov. Bobby Jindal has stated. Instead, this draws the line quite clearly that gay marriages are legal, but do not have to be accepted by anyone and everyone. Pastors, priests and other church clergy can still preach against gay marriage, just as they do with abortion. That is not illegal whatsoever and the Supreme Court has made that quite clear.

Whether you agree with gay marriage or not, it is undeniable that the federal government essentially did have power over who could be married and who could not before the Supreme Court’s decision today. Nonetheless, you can say goodbye to big government on this issue. The legalization of gay marriage does not just mean that gays can now have a document that says they’re married. They can now also receive all the same benefits that a straight married couple can obtain. This is liberty, nothing else to it. The federal government should treat everyone the same. And this decision gets them out of the process, as far as tax breaks, health benefits and etc.

Since gay marriage is legal across the country, we can finally stop talking about legalizing marriage between two consenting adults and start talking about why government should not even be involved in marriage. This is new period of discussing how small government works and big government does not work. If the federal government had never been involved in the marriage business, gays would have never had to fight to have their relationships approved by the state. In Oklahoma and Alabama, the idea of government getting out of who can and cannot get married has been somewhat successful. Imagine a country with a tax code that allows individuals to join into committed unions, gay or straight. Then, the idea of marriage is left up to religious institutions, where it belongs and where it originated. A new dialogue will begin on how it is not government’s place to approve of peoples’ marriages.