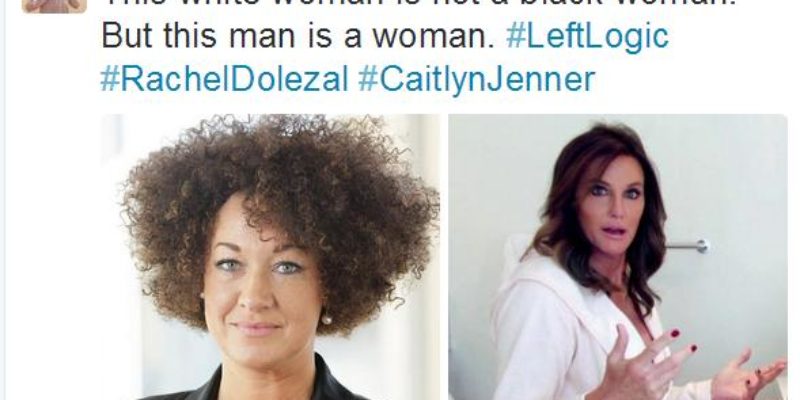 To the Left, gender is merely a ‘social construction,’ created by the human race and fixated on by Western culture. At least that’s what college students are taught in sociology classes across the country.

Take for example the latest NAACP scandal, in which the Spokane NAACP President Rachel Dolezal was exposed for actually being a white woman all along. Dolezal fooled, lied and allegedly sent herself hate-mail posing as a black woman for years.

After Dolezal was exposed yesterday, the NAACP scandal has been largely ignored by the mainstream media. But, for the Left and those who have bought into their cultural nonsense, Dolezal is a lying, cheating scumbag for posing to be someone that she is not.

This is the kind of slippery slope culture runs into when it follows the nonsensical logic of the Left, as Kira Davis explained today at EveryJoe.com. Davis says that the Left has entirely celebrated transgenderism, but deemed Dolezal a poser. Here’s an excerpt:

If you recall, part of my concern about Jenner’s (and others like him) “transition” is what it says about the meaning of identity. Being a woman is more than simply thinking you are and then getting the genitalia to match. It’s an experience that starts at birth. It’s not a skin one can put on. If any man can claim womanhood simply by saying he feels like a woman, what’s to stop a white person from claiming they feel like a black person? Or a black person from claiming they feel like a Chinese person? One could almost see slippery slope starting to form on the horizon. Yet again you screamed, “There is no slippery slope!”

Well, friends I regret to inform you that the slippery slope does indeed exist, and her name is Rachel Dolezal – a white woman from Spokane who just decided she was really black and voila! Some tanning sessions, makeup and some mad voodoo hairdressing skills (seriously, is that a wig? Because if not that is one KILLER perm) and she’s heading up an NAACP Chapter and teaching African-American Studies to future unemployed college graduates.

If we are to use the logic and social thinking of the left, then we can believe that ‘gender identity’ is different from ‘gender’ itself. If this is the case, then it is fair to say that there can be ‘racial identity’ and ‘race,’ which are separate.

This is the problem with leftist thought. It makes absolutely no sense whatsoever and it goes against logic in every way possible. If Jenner gets a spread in Vanity Fair for declaring herself as a woman, then why isn’t Dolezal getting a spread in Ebony Magazine for becoming the person she thinks she was born to be?

Dolezal climbed her way to the top of the NAACP by posing as a black woman, padding her resume with phony discrimination and hardship stories and preaching to others about diversity. Now, though, she is demonized for essentially doing the exact same thing that Jenner has done.

Now, the Left has created the term “transracial,” which no one is buying. Its the ridiculous idea that an individual can be born a race that they weren’t meant to be. This is to assume that God is basically making mistakes when he creates us.

Jenner can identify as a woman all she wants and have everyone call her using the female pronouns. That’s fine, but it will not change the fact that she is actually a man and always will be.

Dolezal can perm her hair and darken her skin all she wants, but she will always be a white woman. Nothing will ever change that. Individuals are born the people they are and there is no surgery or facial reconstruction that can change this.

This is the issue with these ‘identity’ ideas that the Left has created and forced on all of us. What keeps individuals like Dolezal from frauding people if Jenner is allowed to do it and land a Vanity Fair cover in the process? There’s no logic here. None.

Dolezal and Jenner are not fooling anyone. And its about time the Left just admit it and move on.