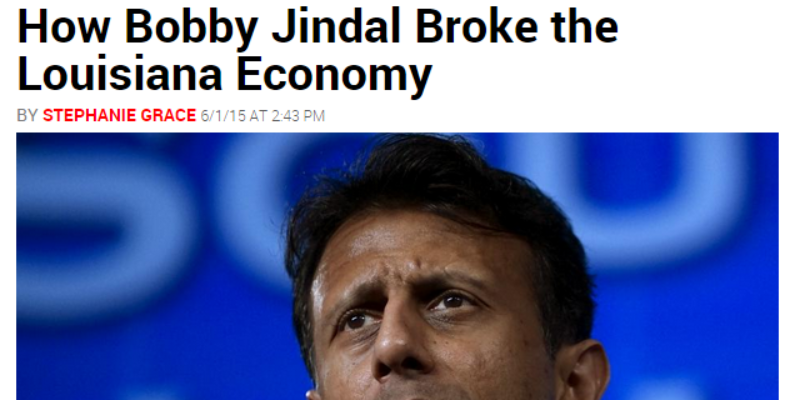 To Columnist Stephanie Grace, Gov. Bobby Jindal “broke” the entire state’s economy because of the fiscal mess he has created.

In a piece published in Newsweek yesterday, Grace blames Jindal for everything that he has done wrong. Grace goes through three categories that even conservatives are furious with Jindal over: His handling of the state’s budget, his absence in the state and his use of one-time money to fund programs.

Grace is correct when she asserts that “These are not happy times in Baton Rouge, where government officials are desperately trying to plug a $1.6 billion budget shortfall.”

The Advocate columnist is also correct when she states that Jindal’s polling numbers are deplorable, even among conservatives.

All of this is true. Jindal is not all that popular, he has misused one-time money to fund reoccurring expenses and he has cut higher education and hospitals plenty.

However, Grace’s column assumes that the public sector is the entire state’s economy. The headline reads “How Bobby Jindal Broke the Louisiana Economy.” (Emphasis added) Since when does the public sector make up an entire economy?

This is a common idea among the Left, that a state’s economy rests on the downfalls and success of the public sector. But, that is not at all the case in Louisiana.

In fact, in the private sector, things are truly looking up in the state.

Take for instance the tourism industry in the state. With the help of reality television shows and movies filmed here, the state’s tourism industry is booming like never before. In 2013, the state hit a new record, seeing 27.3 million visitors to the state who spent $10.8 billion and contributed about $800 million in state tax revenues.

Then last year, in 2014, the state hit an even bigger record, taking in 28.7 million visitors who spent $11.2 billion and contributed $836 million in state tax revenues. Louisiana is more popular around the country than ever before.

Other industries are not doing bad either. For example, The state is the third-largest producer of petroleum in the country and now has more refineries than Texas. And while gas prices are low, which is good news for consumers, but bad news for the state, one quarter of the total production of natural gas continues to be produced out of the state.

Even with the low gas prices, the chemical industry is spreading across the state, with new plants being built all over the state. The wages at these chemical plants are not bad at all either, with the average worker raking in about $57,000 a year.

And of course there is the state’s agriculture industry, which makes the state the second largest producer of sugarcane and sweet potatoes. Crop producers, back in 2013, had a fabulous year, breaking new records for the industry.

The public sector in the state is in shambles, both sides of the aisle agree. For the most part, Jindal is to blame for those problems. But, to claim that the entire Louisiana economy rests on the state budget is more than a stretch.

That is proven with the booming private industry in the state, which has kept the state from collapsing altogether.

It is not the Louisiana economy Jindal has broken, but the public sector. Fortunately, that can be fixed with a new governor and new legislators.

Interested in more news from Louisiana? We've got you covered! See More Louisiana News
Previous Article SADOW: The Louisiana Democrats’ Agenda Is Based On Trivialities And Extremism
Next Article Low Popahirum, June 2, 2015