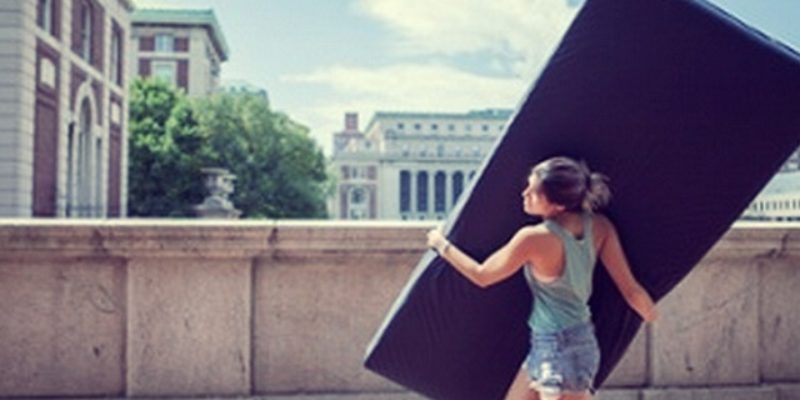 And they’re not very flattering to say the least. If you recall, Emma Sulkowicz, aka Mattress Girl, has released an “artistic” sex tape.

If you recall, Mattress Girl is the Columbia University student who claims she was raped, but her story lacks credibility to say the least. To protest the failure of police and Columbia University to punish the young man she tried to slime just because she cried rape, she carried around a mattress around campus until she graduated. Yeah, she’s more psychotic than your nuttiest ex.

It’s telling, I think, that in Sulkowicz’s purported college dorm room there are no books. She has the same lack of interest in aesthetics as she does in intellectual enrichment: both in her choice of sexual partner (apparently satisfactory member notwithstanding) and the grim, bare walls with which she surrounds herself. Though I expect the austerity of her room reflects her barren emotional interior really rather well.

You can tell “dad bods” are in fashion because both of the people in this video have one. But you do at least have to give an actress credit for doing nude scenes with a man who has larger breasts than she does. Sulkowicz’s size queendom apparently extends to love handles and leave the viewer sympathetic to the travails of her infamous mattress.

It’s revealing of her vanity that she insists on being filmed from four angles. Every crevasse of her unappealing naked body must be considered. Her congressional interlocutor is a gruesome sight in three dimensions, chosen, probably, to make young Emma look thinner. Which doesn’t work, I’m sorry to say.

All in all, it’s a tawdry, miserable encounter that tells us nothing about sexual assault or sex itself but quite a bit about the quasi-demonic inner workings of one Emma Sulkowicz.

This tape is not a depiction of rape, even a fictional one. (She puts the condom on him, for a start. Later, she entreats him: “Hit me again.”) It is a clumsily choreographed exercise in self-love designed to propel Sulkowicz into the public eye again, just as her original false allegations and mattress-carrying did before. It obliterates the line between guilty pleasure and revolting spectacle.

And, just as her mattress fiasco damaged the real victims of rape by making it harder for women everywhere to report crimes and be believed, so too does this narcissistic sociopath’s latest pseudo-intellectual endeavour make life worse for other women. By subordinating every element of the video’s production to her own intergalactic ego, Sulkowicz trivialises rape by leveraging it as a trivial plot point in the continuing melodrama of her own self-obsession.

I don't see any rape in the vid, just a bad amateur sex tape from an attention seeking histrionic. She PUT the condom on him = consent.

Interested in more national news? We've got you covered! See More National News
Previous Article AFTERBURNER: You’ll Like Tomorrowland Fine, If You’re A Progressive Socialist
Next Article Feel Free To Watch This As Often As You Like…