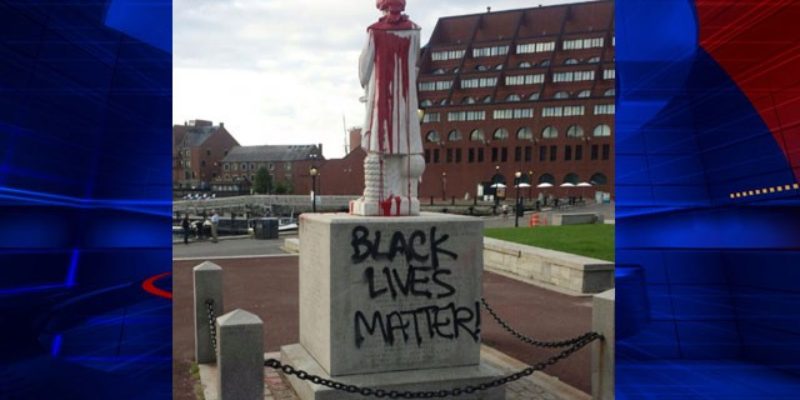 The park where it happened cleaned up the statue, according to local media reports.

The Christopher Columbus statue that graces the waterfront in Boston’s North End was vandalized on Monday night.

The statue is covered in red paint and had the words “Black Lives Matter” written on the back of the foundation block that the white marble statue stands on.

“I think civil disobedience has a place it’s unfortunate it happened here. At the same time it starts a conversation we need to have,” she said.

The city’s park’s commissioner is unsure of who is responsible, but says this isn’t the way to open a discussion.

Chris Cook, parks commissioner, said, “We encourage discourse but this is not the way to do it you don’t want to destroy public property.”

The “black lives matter” mob doesn’t want a discussion, they want to erase anything they see as “white history”, even if it is a part of white history. You can’t get anymore a part of American history than the European who (re)discovered the Americas. Now if some local Native Americans decided to vandalize the statue, they might have a legitimate grievance. The “black lives matter” mob, not so much.

This is Cultural Marxism in action. The “black lives matter” mob is trying to erase any history that’s not approved by them. This “movement” has stopped being about unarmed black guys being killed by cops and has become a way to attack what they see as “white America.”

If this isn’t trying to start a racial war, I don’t what is.