Today we’ll look at the battlefield that is the governor’s race.

And as of right now, that battlefield looks a good bit like the trench-scarred wasteland of Verdun in 1916.

It’s a David Vitter-John Bel Edwards runoff, as things look and as they’ve always looked, because Jay Dardenne and Scott Angelle are canceling each other out. Vitter and Edwards are both polling in the low 30’s, while Angelle and Dardenne are in the 12-15 percent range. If one of the two were to get out, there’s a decent chance the other could make a run at knocking one of the top two contenders out of the runoff, but both campaigns look healthy enough to survive to Election Day at present.

Which is why all the campaign-watchers have been looking for a development somewhere that would break the race out of the trenches. So far, though, that hasn’t happened. Nobody has perfected the tank quite yet, to carry on our World War I analogy.

And that’s why this dustup between David Vitter and Jay Dardenne over the latter’s Super PAC is somewhat intriguing. It seems that the campaign trackers Vitter employs managed to drop in a pretty three-pointer a couple of weeks back when they managed to snap this picture… 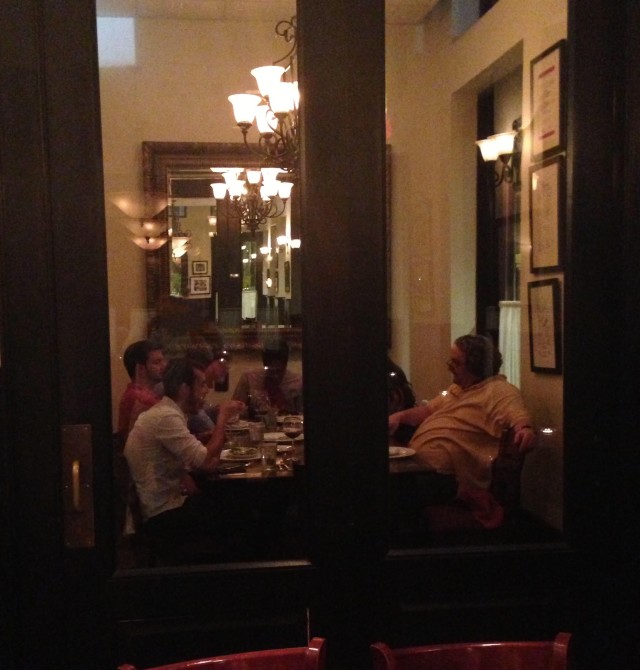 And the picture is significant, Vitter’s campaign says, because campaigns and Super PAC’s aren’t supposed to coordinate their activities. There is a bunch of federal law we could quote here, but the gist is that campaign people and PAC people have to have a wall of separation between them when it comes to campaign activities like TV and radio ads, direct mail and so on.

And Dardenne has an ad out that Now or Never paid for. So this crowd getting caught going to dinner in advance of the ad going out, Vitter says, looks like coordination. And whether it actually is or not, from a political standpoint it’s a score for Vitter to call it that.

In truth, the photo isn’t evidence of anything. These folks, other than perhaps Moody, who did come in from out of town, have known each other for a while and have hung out socially, are within their rights to go out to eat together if they want. But it might have been good strategy to have a couple of folks not associated with the Dardenne campaign or PAC at the table for deniability’s sake.

Normally none of this would matter. It’s absolutely a “so what?” thing. The campaign rules on PAC’s and so forth are arcane, and most people don’t really care all that much – which is one reason why when Democrats go on their occasional rants about “money in politics” the public usually yawns.

The problem is Dardenne has made that a chunk of his message. After all, when he attacked Vitter a month or so ago about his PAC collecting $70,000 in legal fees from the State Board of Ethics after it won a case allowing it to take unlimited donations it positioned Dardenne as Mr. Ethics where this campaign was concerned.

And that wasn’t a bad idea; Dardenne has a good reputation as a forthright public servant and somebody who has managed to do his work in the legislature, as Secretary of State and as Lt. Governor without anybody ever calling him a crook. Playing holier-than-thou with things like Bobby Jindal going overboard spending state dollars on Louisiana State police protection as he travels on the presidential campaign trail and Vitter’s Super PAC legal expenses is in his wheelhouse.

But the problem is overreach. Dardenne certainly hasn’t gone through $2 million in state trooper travel costs, but there are multiple videos showing him being accompanied by troopers as he’s gone to campaign events. And now, as he’s attacking Vitter for the greed (or whatever) of his Super PAC this picture which at least suggests coordination pops out.

So while it’s a small thing, it also undermines Dardenne’s narrative and it makes him look a little like a hypocrite when his campaign’s ethics plan calls for legislation to “Tighten the rules allowing communication and coordination between candidates, their campaigns, and Super PACs that support them.”

As a bit of political maneuvering on Vitter’s part this is SportsCenter Top 10 quality work – it probably doesn’t break the race open or kill Dardenne, or even really help Vitter that much, but it’s still really impressive if you pay attention to the nuts and bolts of how candidates get leverage in a campaign.

And Dardenne is a little vulnerable at the moment to attacks not from Vitter so much, but Angelle.

If you’re Vitter, and also if you’re Edwards, you really don’t want Dardenne out of the race or even significantly weakened. If he’s pulling 13 percent of the vote right now that probably keeps Vitter and Edwards in the runoff, which is what both want.

But if you’re Angelle, you want Dardenne down the tubes as fast as possible so you can consolidate the non-Vitter Republican vote and try to make a run at either Edwards or the Senator. So even though it was Vitter’s team who unearthed the Little Village photo if you hear any more about this it would make sense if it was coming from Angelle.

Sooner or later Angelle and Dardenne are going to have to have a death match, probably sooner than later, because for each one the other is the primary roadblock to a chance for victory. It’s possible that this thing could contribute to bringing that death match on.

I did a couple of columns for the American Spectator this week about Katrina, since this week makes 10 years since the storm. The first one was about who folks in Louisiana actually blame for the lousy response to the storm, an opinion a bit different than that the national media would have you believe. And the second, out today, contains a few other points from a Louisiana perspective.

No, I’m not going to tell you any more than that. Go read ’em.

This is more or less disqualifying. I thought the first bite at the apple with Elbert Guillory using the N-word was more or less a suicide bomb used against Kip Holden, and it actually had something of an effect. But this time? It’s a suicide bomb, sure, but it’s one being set off in the middle of the desert.

I missed this when it was posted last weekend, but Andy McCarthy’s takedown of the Justice Department and its horrendous performance in the Danziger Bridge case in New Orleans is well worth a read.

We want to like Jim Letten, because he did an enormous amount of good in cleaning up public corruption in the New Orleans area. But Letten’s legacy is more or less in the tank given what we know of his activities as U.S. Attorney in New Orleans after, say, 2009. When the deal was cut to keep Letten in that job after Barack Obama’s election in 2008, the abuses in that office seemed to metastasize. And instead of seeing him as a fighter of corruption, he’s more of an abuser of individual rights now.

Memo to all losers: your problems are not our problems and you do not have the right to inflict your pain on the rest of us. If you lack the courage to fight through adversity with character and class, then check out on your own. Don’t try to take us with you.

We should all show up at Everett Mitchell’s house and walk off with as much of his stuff as we can carry. So long as private property is no longer a thing, that is.