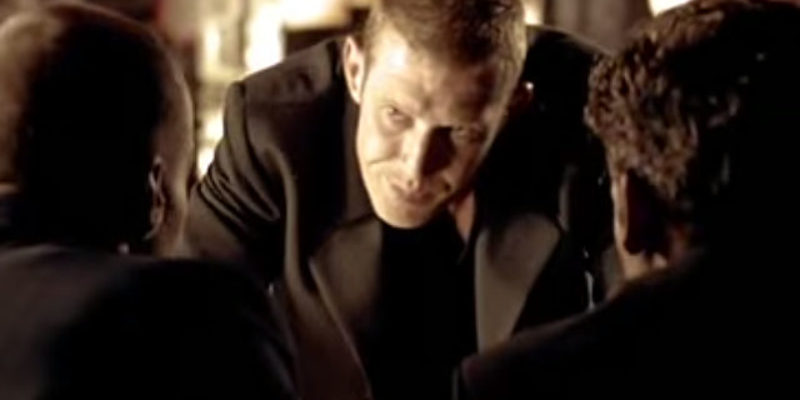 I will, if you got the time.

Lookit, you won’t see my name on any of them there lists everybody’s goin’ goofy over. I might be a fur-bearin’ varmint, but I got enough smarts not to root around on a website like that. Missus Oscar’d have my tail for doin’ somethin’ so stupid.

But there are some of y’all two-legged rats out there who ain’t quite as wise, and y’all need a little remedial education. So I’ll give it to ya, free of charge.

And it’s like this. You ever see Lock, Stock and Two Smokin’ Barrels? If you did, you’ll know what’s comin’. If not, Imma help you but you need to go watch that movie. You can’t really unnerstand life as we all live unless you’ve seen that flick.

Anyway, here’s a scene. It’s not particularly safe for work what with all the cockney accents and all, plus it involves sex toys. You’re here readin’ about Ashley Madison, so you can’t complain about anything bein’ dirty, but maybe your prude coworkers might be victimized.

OK, see what he’s doin’ there? People with guilty pleasures and dirty secrets are real scammable, because what are they gonna do about it? In this case, they’ll eat that 25 quid rather than get called out for bein’ a perv or whatever, so the scam is foolproof.

An’ that’s what Ashley Madison is. You sign up thinkin’ it’s a dating site for cheaters, but it ain’t. It’s almost all men – like 95 percent or whatever. And apparently the people runnin’ the site hired women to play like they were female cheaters lookin’ to hook up. And then they’d charge these poor dummies per each message they were sendin’ back and forth to the Ashley Madison employee chicks who played all friendly with ’em like eventually there was gonna be a tryst in a no-tell motel somewheres. Keep ’em on the hook until the bank account gets drained, and you can do it with absolutely no fear that you’re gonna get called out.

Because come on, who’s gonna run to a judge an’ say “Yer honor, these guys scammed me. I gave ’em money lookin’ for somebody I could screw around on my wife with, and all I got was friendly messages from fake people.”

Nobody, right? Just like nobody would cash the check from the “fan club” in the Guy Ritchie movie.

As scams go, as a long con, this was some brilliant, brilliant stuff. It’s almost like the people who did Ashley Madison saw Lock, Stock and Two Smoking Barrels and figured out a way to update the scam for the 21st century.

Unfortunately for them, somebody who didn’t like what they were doin’ hacked their site and blew the whole thing up by leakin’ out everybody’s name. And now that these sad clowns are out in public, there prolly will be a buncha lawsuits – because there’s nothin’ to lose anymore.

Still, it’s a pretty high moment where grifting is concerned. Almost good enough for a movie – in fact, I wouldn’t be surprised to see a Bradley Cooper flick a la American Hustle on this deal pretty soon.