The “good government” group Blueprint Louisiana has come out with a new blueprint for Louisiana. Unfortunately, it contained lots of bad ideas.

Here’s the press release announcing their goals for the 2015 elections.  Here are the goals and some of the proposals they make.

Now there is some good in this blueprint such as the higher education part. But the bulk of Blueprint Louisiana’s ideas can be summed up as higher taxes and higher spending.

Louisiana businesses and individuals have already been hit with $700 million in higher taxes. I don’t think there’s an appetite for more. Blueprint wants to raise taxes on gasoline and diesel (which will result in higher prices on everything), higher income taxes, higher sales taxes, and probably a higher corporate tax rate. Blueprint dreams it up, Louisianians pay for it.

On top of raising your taxes now, Blueprint wants to ensure that your taxes will go up in the future. They want Louisiana to adopt Medicaid expansion. What has happened in most states that have expanded Medicaid is that enrollment has exploded beyond initial projections. Also, Medicaid expansion supporters treat this as if this is free Federal money for five years. What happens when the Feds decide to alter the terms of the arrangement and the state’s share kicks in earlier than expected? What happens if it winds up costing more than expected?

Outgoing State Rep. Brett Geymann (R-Lake Charles), who was one of the “fiscal hawks” put this on his Facebook page: 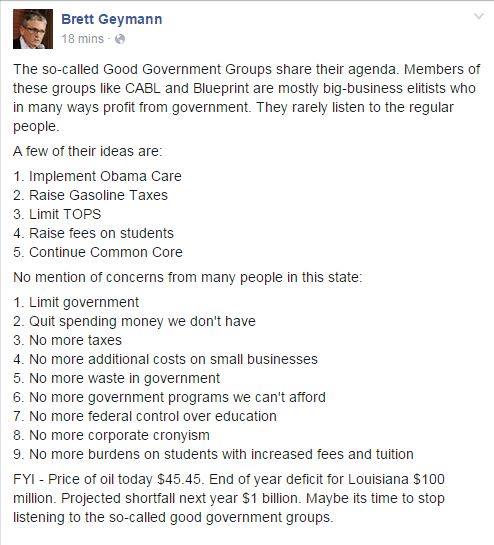 The people of Louisiana might have different ideas, but it’s clear Louisiana’s elites have decided they will balance future budget deficits primarily through tax increases. That’s not fiscally conservative.