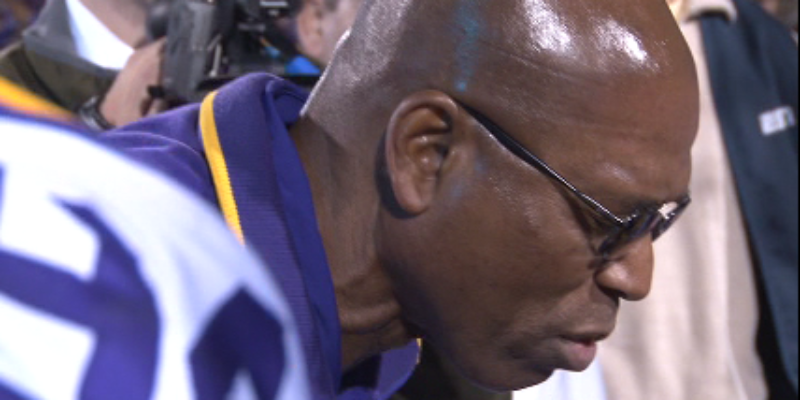 Just in time for the kickoff between LSU and McNeese/McNephew, we now know why LSU beats Tulane in football pretty much every time they play.  It isn’t superior coaching or talented players or fantastic facilities.  LSU is much more tricky and employs a most dastardly weapon: football chaplains.

That’s correct.  LSU has been soliciting the help of the Almighty to best its foes (including Tulane) on the football field.

Enter Andrew Seidel, an attorney for the Freedom From Religion Foundation (also known as Freedom From Reality Foundation) and Tulane Law alum who, a few weeks ago, sent a letter to the Fighting Tigers (along with the vast majority of the other SEC schools) moaning about their football chaplain programs and the establishment clause of the First Amendment.  You know the drill: the atheists and “free thinkers” claim that the establishment clause creates a separation of church and state and that any public body or university engaging in any activity which remotely touches on religion is per se unconstitutional.  The report they published is comical in its dramatics:

Public universities and their employees cannot endorse, promote, or favor religion. Yet, many football coaches at public universities bring in chaplains—often from their own church or even members of their own family—to prey on and pray with students, with no regard for the rights of those students or the Constitution.

I can see it now: sly chaplains, with Bible in hand, sneaking up on 300 pound LSU linemen to “prey” on them.  Ken Ellis, the chaplain for both LSU and Southern’s football teams, must be astonished to know that he has become so intertwined with the Government of the Great State of Louisiana as to establish a religion right there at Tiger Stadium.

Luckily, decent people have a friend in the Alliance Defending Freedom, Freedom Guard, and Freedom Guard’s chief lawyer (and all-around nice guy) State Rep. Mike Johnson.  ADF sent a letter to LSU pointing out that no court has ever held that a university cannot have chaplains:

When accommodating religion, many public universities work with volunteer chaplains to serve the needs of student athletes who are often consumed with studying, team practice, and team travel.  These chaplains serve the spiritual needs of student athletes who cannot attend religious services due to their busy schedules.  No court has ever said that public universities may not utilize chaplains for their athletic teams.  In fact, many courts have upheld chaplaincy programs in other similar contexts: the military, prisons, police and fire departments, hospitals, airports, and the legislative branches of government.

Mike Johnson went a step further and offered to defend LSU free of charge should FFRF pursue litigation.  Johnson noted, “Our student athletes should not have to surrender their fundamental right to the free exercise of religion, especially since so many of them are on the road frequently, on Sundays and other designated times for worship, and often working under stressful conditions. We cherish religious freedom in this state, and we surrender it to no one.”

Johnson and ADF are absolutely right.  There simply is no precedent for the bullies at FFRF to stand on.  The cases they cite pertain to high schools and courts have ruled time and time again that colleges have much more leeway in these matters than colleges.  Simply take a look at Town of Greece v. Galloway, issued by the Supreme Court last year, wherein the majority noted, concerning legislative prayer: “The Court has considered this symbolic expression to be a ‘tolerable acknowledgement of beliefs widely held,’ rather than a first, treacherous step
towards establishment of a state church.”  To be sure, Les Miles could not require his player to attend religious services, but there’s been no indication such activity has occurred at LSU.

Johnson, in comments made to The Hayride, got it right when he told me, “We’ve been defeating these radical leftist groups in the federal courts of Louisiana for almost two decades, and we’ll do it again this time if they bring a challenge. Their search-and-destroy mission to take out every remaining symbol of America’s deep religious heritage will stop in Death Valley. Mark my words on that.”

Interested in more news from Louisiana? We've got you covered! See More Louisiana News
Previous Article VIDEO: Ted Cruz Gets Accosted About How Global Warming Is Driving The Lobsters Away, And He Proceeds To Own His Questioner
Next Article Life Gets Better Tonight, Because The College Football Season Begins