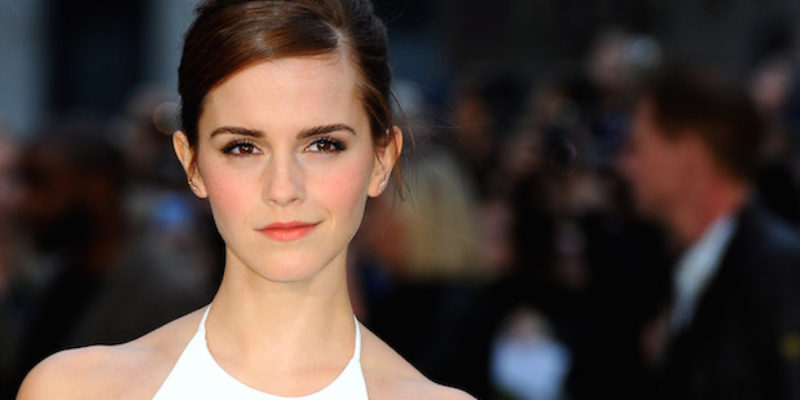 The English darling (I’m sure that’s sexist of me to say), best known for her role as Hermione Granger in the Harry Potter films, is having to go through the struggle of being directed by a man more so on a movie set than by a woman.

Oh my goodness! The horror! How does she do it?!

Watson is single-handedly responsible for bringing back the concept of feminism into the mainstream when she gave the really long speech to the United Nations about gender equality. (Which, by the way, every Hollywood elite was drooling over like a dog.)

Ever since then, Emma has been drumming up fake controversies where she basically claims that women are still living in the stone-age all at the hands of that dominant, evil man who wants the world all to himself.

This past week, Emma came out and proclaimed that it’s so hard being an elite from Britain in the US film industry because she is always working for male directors.

Read Emma’s pout about the horrid environment she has to work in:

I have experienced sexism in that I have been directed by male directors 17 times and only twice by women. Of the producers I’ve worked with 13 have been male and only one has been a woman. But I am lucky: I have always insisted on being treated equally and have generally won that equality. Most of the problems I have encountered have been in the media, where I have been treated so incredibly differently from my male co-stars.

I think my work with the UN has probably made me even more aware of the problems. I went out for a work dinner recently. It was 7 men… and me.

If something does go wrong in the workplace, the support network is not brilliant. The men at the top often find it difficult to relate to a lot of the problems women face and therefore we aren’t taken very seriously. Yet, women are just as guilty of discriminating against women. Some of the best feminists I have encountered are men, like Steve Chbosky who directed me in The Perks of Being a Wallflower, and director James Ponsoldt who I am working with at the moment [on The Circle]. Some women can be incredibly prejudiced against other women!

This is the problem with elites like Emma Watston, they perpetuate the victim-hood culture that’s already been forced down the throats of young people.

Look at actresses like Jennifer Lawrence (the ‘It’ girl from “Silver Linings Playbook” who literally everyone wants to be, including men).

Jennifer is the highest paid actress in Hollywood and it’s truly because of her famous counter-part, male director David O’ Russell, who has made her an absolute star.

But, oh my! You can’t say that, because then it seems like Jennifer could not have gotten to where she is without a man.

Except that it’s the truth. Jennifer would have never become the phenomenon that she is without David O’ Russell putting her in all of his Oscar-worthy films (including one called “Joy” coming out later this year which is bound to fabulous because anything Jennifer touches turns to gold).

Emma, on the other hand, is the opposite. (Which can we just admit that she’s better at showing up to award shows in Prada jumpsuits than actually acting?)

No, Emma has to complain to the rest of us about her elite problems of why she is not at the stature of Jennifer Lawrence yet, and she wants everyone to know it’s all because of those big bad male directors, not because of the fact that she’s a mediocre actress.

How’s this, Emma Watson wouldn’t even be half of the actress she is today if it weren’t for that little known female author named J.K. Rowling who wrote the Harry Potter series.

Don’t expect her to point that out, because it does not fit her narrative that women are living in the caveman times, having to find scraps of food in the jungle just to survive.

Oh, and Emma Watson would not be the mogul that she is if it weren’t for the fashion industry, which absolutely adores her and is largely controlled by female fashion magazine editors and rich Italian women like Donatella Versace.

But please Emma, continue to lecture us on how you’re being held back by men and gender inequality in one of the most wealthiest and elite industry’s in the entire world.

And when Emma is done complaining about the deplorable treatment she suffers like having to dare work with men (what a rough life she has), she will tell us that it is not just her suffering, it’s women all across the US and UK.

Emma constantly brings up the ridiculous “gender pay gap” talking point, which has been debunked over and over again by economists because it does not take into account the different choices women and men make while in the workforce.

So essentially, Emma will tell us that she’s making about 25 cents or something like that for every $1 that Leonardo Dicaprio makes.

If you make that argument, though, Emma will come back and say ‘See! Men like Leo get all the Oscar-worthy roles in movies!’

Tell that to Jennifer Lawrence, Jessica Chastain and Sandra Bullock. They’ve all won Oscars for their leading roles in “Silver Linings Playbook,” “Zero Dark Thirty” and “The Blind Side.”

And while you’re at it, tell that to Kathryn Bigelow, the director of “The Hurt Locker” and “Zero Dark Thirty,” both of which won Best Picture at the Oscars and Bigelow, herself, is credited as being one of the best directors when it comes to depicting war.

Even after making those wide-sweeping “wage gap” claims, Emma will continue to tells us how it’s so horrible that young boys are taught to be tough.

What exactly is wrong with teaching a child to be tough and strong?

That’s right, because it’s sexist. So instead, Emma would prefer that we teach boys to be in touch with their feelings and whine and cry and force themselves to do more feminine activities just so that elites like Emma can be happy.

Yeah, how about no.

This is the kind of nonsense feminists who completely ignore the facts like Emma Watson have been pushing for decades. It’s just always so funny because it’s always the elites like Emma who have no clue what women are actually going through on a day to day basis.

The last thing middle class and working class women in the US and UK want to hear is a posh British brat complaining about having to be directed on a film set by someone of the opposite sex.

*snaps in a circular motion*