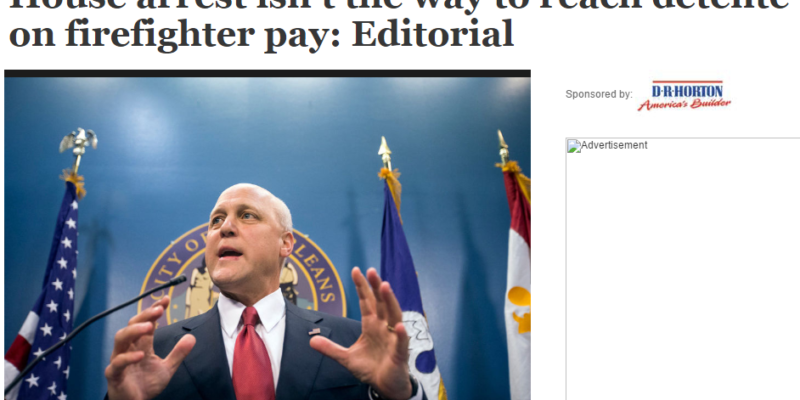 Since no one reads the Times Picayune anymore, we thought we’d give readers an update on the ridiculousness making its way into the editorial pages of the former New Orleans daily newspaper.

Considering Mayor Mitch Landrieu refuses to pay New Orleans firefighters their decades-late backpay, totaling roughly $142 million at this point, it would be expected that the Times Picayune hold Landrieu accountable.

But, of course not.

In fact, in NOLA.com’s editorial on the issue, actually goes as far as to blaming the city’s firefighters for the ruling by Civil District Court Judge Kern Reese in which Landrieu is demanded to pay the firefighters or be put on house arrest for the remainder of his two years in office.

Firefighters are impatient to be paid their overdue wages at this point, and that is understandable. But the level of acrimony reflected in contempt proceedings isn’t good for anyone involved.

Civil District Court Judge Kern Reese sounded pained by the decision before him. “I have no other recourse but to make a finding of contempt in order that the judgment be executed. I don’t envy you in your position,” he told Mayor Landrieu. “Your job is thankless on many occasions, and you may consider this one of them. But as chief executive of the city, I have to hold you responsible.”

Basically, the Times Picayune editorial board is saying that yes, the firefighters are owed their backpay money, but they should not be so forthright about it. Right, because they should be more concerned with Landrieu’s feelings?

When has Landrieu ever been concerned about the plight of the New Orleans firefighters? When discussing house arrest over not paying the firefighters, Landrieu laughed it off, saying his wife would be happy to have him home.

Instead of holding the city accountable for failing to pay these firefighters for decades now, the Times Picayune editorial board makes it clear that they believe that Landrieu and the New Orleans firefighters are responsible for this issue.

Here’s the closing of NOLA.com’s editorial:

Both sides need to be reasonable and willing to compromise.

And no one should be held on house arrest.

Why shouldn’t Landrieu be held on house arrest? When private citizens or journalists are held in contempt of court, they’re sometimes jailed. Just look at Kentucky Clerk of Court Kim Davis who was jailed because she would not sign off on gay marriage licenses.

It is always the Left and their counterparts in the media that go after conservatives for lawlessness and demand that the courts come down hard and make them pay the consequences.

However, when it’s Democrats like Landrieu, all we hear from media outlets like the Times Picayune is a plea and beg to not put the mayor of Louisiana’s most famous city on house arrest because it’s mean.

Please, Landrieu can fend for himself on this issue since it his administration which failed to cooperate with the courts.