Here’s what a customer was told by Harry T’s Lighthouse restaurant in Destin, Florida when he tried to go to dinner during the LSU-Florida game.

On Saturday night October 17th after attending a wedding on the beach, the wedding party consisting of 20 people agreed to dine at this establishment. We called and were advised 8 p.m. Was a good time. I arrived ahead of the party with my wife and another couple and proceeded to check for table availability. It was at this point that the greeter of Harry T, stated LSU fans were not welcomed here. I was surprised by this statement, and explained that I was looking for guest’s of the wedding. I again was told we are not welcome, I proceeded to the rear of the restaurant and observed numerous tables vacant. But more so observed countless numbers of Gator fans at decorated tables. This did not offend me or cause me to lose my appetite. I then was again told by the greeter who additionally made a point to tell my wife that our party was not welcome. I realized it was the LSU hat I was wearing so proudly. We then left this establishment and all met at margaritaville for dinner. This is by all means one of the craziest things I have ever encountered as for as out right discrimination. They should be ashamed of themselves, I am sure there. Are many LSU fans that spend a lot of money in Destin. Please read this response to see what they think of us in Harry T’s
Maybe the rest of the business’s feel the same ?

Here’s the email he got from Harry T’s, which he posted on Tiger Droppings. 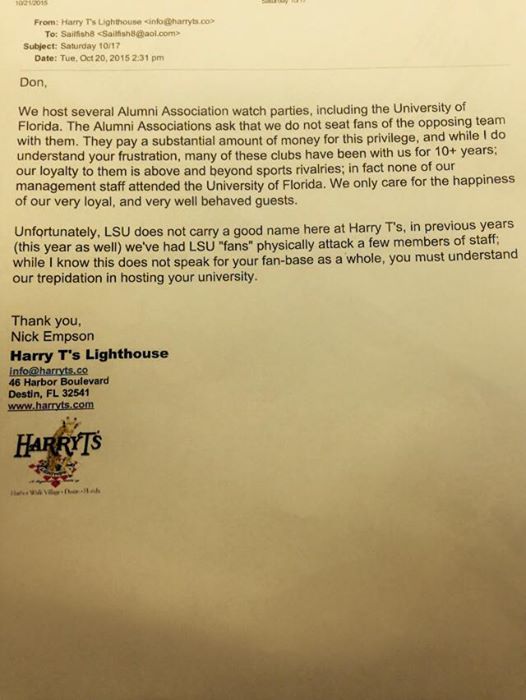 Once this letter got attention, Harry T’s Lighthouse posted this on Facebook.

To the fans of LSU and other sports teams,

Harry T’s has upset many LSU fans and I want to first apologize. It was not our intention to insult, alienate, or upset you. I would like to explain the reasoning behind the actions we took on Saturday.

Four college teams have approached us to be the “headquarters” of their alumni. The deal was we host their teams and they would bring all the alumni and all the business. And so we do, but it’s not as black and white as that. As the General Manager, the one who worries about the bottom line, it’s poor business practice. The football discounts are not profitable for the restaurant and all of the inside area is taken with the fans. So why do we do it? The owner has raised two young men who both attend college. He is a major contributor to their college and has a lot of respect for young people trying to do well. On these football days we raise money for scholarships for the respective schools. We have raised over $31,000 to date.

The Florida Gators were concerned with the actions of one individual last Saturday, one bad apple that tried to give all of LSU a bad name. That individual had threatened to send unknown persons in to physically attack some Gator fans. It was the president of the Gator Alumni that asked if we would keep the inside area for Gator fans only. We went next door to Jackacuda’s and let them know we would send all the LSU fans there, so that everyone could enjoy their teams.

Anyone, football or not was welcome to sit on the patio outside. The weather was beautiful and it was sans any Gator activity. We had several guests wearing LSU garb enjoying their meals there. No one that I spoke to was upset about the limitations on the seating area.

Nick responded to one guest who was apparently treated poorly at the door Saturday night. This was, and is no, part of his responsibilities within the restaurant. He was an overzealous new manager, he has been since reprimanded and is no longer a manager at Harry T’s. The part of his letter about trepidation over LSU fans was completely false. In fact, the owner’s wife is from Louisiana and is herself an LSU fan.

Again, I apologize to Don and any LSU fans we may have ostracized. It has always been our intention to do good with the football games; raise money for kids and let everyone have fun. Everyone is welcome at Harry T’s.

Maybe if the idiot manager would’ve paid attention, he would’ve know that LSU fans are some of the generous people on Earth. LSU fans just helped raise $40,000 for the Red Cross to help with flood relief in South Carolina. LSU Running Back Leonard Fournette just auctioned off his jersey to raise more money for South Carolina. Finally, as South Carolina’s The State noted, LSU and its fans went out of their way to welcome the Gamecocks when they were forced to move their home game to Baton Rouge.

Meanwhile if you’re in Destin and if you bleed purple and gold, you might want to dine somewhere else.